When the founders of rising Australian beauty brand Ultra Violette announced 11 adaptable shades to launch their first tinted SPF formula last week, they had already exceeded the efforts of the local competition.

Angry commenters in the social media community the brand had fostered, partially fuelling their rise to prominence in the line-up of products on Sephora, The Iconic and Adore Beauty, were quick to disagree. Accusations of racism and privilege piled up beneath photographs of the newly developed shades on models with different skin tones. 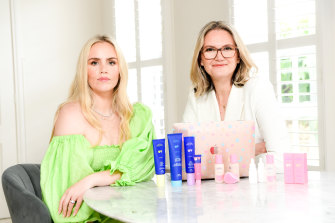 With the launch of their tinted SPF products, Ultra Violette founders Ava Matthews and Bec Jefferd have come under fire for their approach to inclusivity.Credit:Justin McManus

Co-founder Ava Matthews said that trolling comments were removed but what remains is vocal dissatisfaction, much of which came before the product range went on sale on Monday.

“If two dark shades work for ALL shades of darker skin, why are there a bunch of lighter shades? Why not two light ones for ALLLLL shades of white. This is a joke yall [sic] come on what is this?” said @skinkerith.

“Very uneven shade range. Those first four look almost identical same [sic] with next three and then a few dark shades at the end. Very disappointing to see. Have brands not learned anything,” said @olgreeneyesemma.

This was the largest release since Ultra Violette’s launch in 2019, with the 11 products doubling their sun care-focused offering, and the company’s first foray into colour. The founders, who employ three full-time staff, worked with a make-up artist of colour, experienced with enhancing different skin tones, and sought out a manufacturer who could produce the full range without leaving them financially vulnerable.

“I was completely distressed,” said co-founder Ava Matthews of the negative feedback. “It was pretty concerning. We don’t want to disappoint everyone. We feel like we have so far done the best by our customers.”

Originally, Matthews and Jefferd planned to launch the range in the Australian market with 10 shades but after testing on 100 different women expanded to 11, resulting in four light shades, four medium and three darker.

Customer expectations have shifted in recent years, thanks to what is known in the beauty industry as The Fenty Effect, following the 2017 launch of pop singer and entrepreneur Rihanna’s foundation collection with 40 shades. It now has 50 shades. Fenty does not stock a tinted SPF, but does make tinted moisturisers in 25 shades.

“We had to land on how many we wanted and what we could afford,” Jefferd said. “There is a quite a process to go through with passing the required testing for an SPF product.”

Back in 2018 beauty entrepreneur Zoe Foster-Blake came under fire when her Go-To Skincare brand released a tinted SPF moisturiser in one shade. The product was removed by Foster-Blake in 2020, in the interests of inclusivity.

“We had been warned going into tints that you are not going to win,” Jefferd said. “The alternative is to have never done it. For a moment on Friday we wished we hadn’t.”

Looking at an image of the 11 initial Dream Screen shades, Melbourne First Nations make-up artist Kaydee Kyle-Taylor (@ithinksheafreak) delivers a sigh of resignation at a familiar dilemma. Kyle-Taylor, who predominantly works with BIPOC clients (Black and Indigenous People Of Colour), doesn’t carry BB creams and tinted sunscreens in her make-up kit out of frustration.

“I think it’s sad that it’s 2021 and I’m having issues like this every day,” Kyle-Taylor said. “Looking at these shades, I don’t think one would suit me.”

“Things have gotten better in Australia, but we still miss out. Big brands have much larger ranges of skin tones, but the Australian market only seems to get the lighter shades. We are one of the most diverse continents and there is still this idea of us as a white nation.”

Ultra Violette could have avoided this outrage by having a broader conversation and including more people in product testing, according to Kyle-Taylor. “If they spoke to more people it would have been good. There should have been more make-up artists of colour involved.”

Since the backlash, Matthews and Jefferd have reached out to online critics interested in having a constructive dialogue, inviting them to participate in future testing and are looking at expanding their shade offering before launching in the UK.

“We never intended this to be the final 11,” said Matthews. “I have never seen a brand that has launched a tinted brand of any sort that has not changed and evolved.”

“As two white women, we know that we need to check ourselves and be a part of these conversations with our audience,” Jefferd said. “Most of all, this is an opportunity to listen.”

What you need to know about taking collagen supplements

10 Luxury Brands Getting Behind Sustainable Fashion