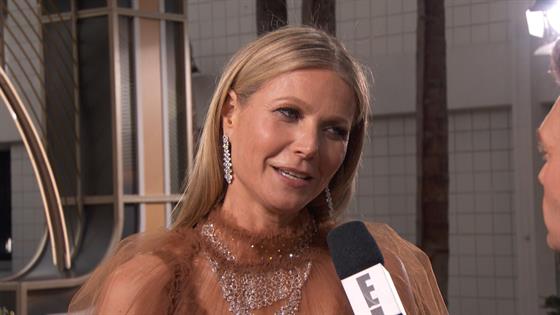 On Sunday, Gwyneth Paltrow turned heads at the 2020 Golden Globes with her stunning sheer Fendi gown, which left little to the imagination with its corseted tulle silhouette. After the big show, The Politician star took to Instagram to reflect on the star-studded night, giving fans a look at her favorite part of the Golden Globes.

Flashing the camera a big smile from the backseat of her car, Gwyneth wrote, “The best part of the night is always getting home.” Eager to head back, the Goop founder can be seen kicking her feet up on the seat in front of her and still rocking her show-stopping Fendi dress.

Understanding where Gwyneth is coming from, Ashley Graham chimed in with a super relatable comment. The mom-to-be wrote, “My fav part is ripping my shoes and bra off.”

Before heading to the show, the mom of two documented her award show prep on Instagram, which began with a mindful sweat sesh at CorePower Yoga in Los Angeles. Then, she got a quick massage and joined hubby and Politician co-creator Brad Falchuk for lunch.

After their day date, Gwyneth treated herself to an at-home facial using the Jillian Dempsey vibrating face roller. Then, makeup artist Georgie Eisdell worked her magic using a slew of Goop-approved skincare and cosmetic products, including the brand’s Enriching Facial Oil and GoopGlow Microderm Instant Glow Exfoliator. For her bronzy beauty look, Georgie used a warm-hued eyeshadow palette from Chantecaille.

Once on the red carpet, Gwyneth opened up to E!’s Ryan Seacrest about how Brad convinced her to join The Politician, which was nominated for Best TV Series, Comedy.

The best part of the night is always getting home 🧡

The best part of the night is always getting home 🧡

“I’m sort of semi-retired a bit from acting ‘cause I have a company that I do,” she told E! News exclusively. “But I’m married to the writer and he asked me to do the show. He said he was writing it for me. I said, ‘I’m Goop from head to toe,’ but he’s very charming. He’s very convincing. So…”

Watch E! News Monday at 7 a.m. for a recap of the biggest 2020 Golden Globes moments followed by Pop of the Morning at 11 a.m.