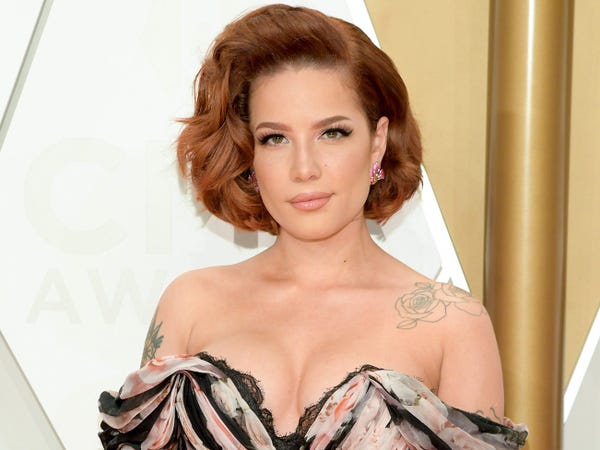 Halsey completely altered her hairstyle this week, and people are loving the change.

On Monday, the "Without Me" singer shared a selfie to Instagram, showing herself wearing a white T-shirt, glowing makeup, and a beaded necklace over a gold, cross chain. In the photo, Halsey is also seen with a new buzz cut that's shaved closely to her head.

Halsey said she shaved her hair because she 'missed' being bald

On Twitter, Halsey spoke with fans about her latest haircut. She first wrote "I love be bald," and later answered a fan's question about why she decided to shave her hair.

She also posted a TikTok video showing how she went from having long strands to shaving a buzz cut.

The musician's haircut is inspiring people across social media

Though Halsey's new haircut might be surprising to some, it's also extremely relatable. On Twitter, people responded to the musician's tweet with stories and photos of their own shaved hair.

On TikTok, people also said Halsey's new look is inspiring them to consider a similar haircut.

"I've been thinking about shaving my head all day," one person wrote. "Don't tempt me with a good time."

In 2016, Just Jared reported that Halsey defended Lady Gaga after The Chainsmokers — who Halsey collaborated with on their hit "Closer" — criticized the song "Perfect Illusion." Shortly after, Drew Taggert of the musical duo seemingly tweeted "F— you bald b—-," according to the publication.

Halsey then seemingly responded to Taggert, according to Just Jared, by sharing a since-deleted Instagram selfie with the caption: "I love my dumb bald head." On Twitter, however, Halsey clarified that the post was actually written in response to "rude comments" about her hair, and that she and Taggert are friends.

"No no no," she wrote. "That shade was @ rude comments bout my shaved head. Drew got hacked. He's the homie + so respectful of me."

Still, Halsey has always embraced her hairstyles and encouraged others to do the same. In 2018, a Twitter user shared a text message that she received from her sister saying that a boy blocked her on Snapchat once he realized that she was bald.

Halsey replied with a photo of herself with a buzz cut, and said: "Tell ur sis if she ever wants to come kick it with me at a show I'd love to have her. Bald is beautiful. And she is most certainly a shining example of that."

More recently on Thursday, Halsey reflected on her past experience with shaved hair, while also considering going back to the style.

"When I was bald everybody was so damn mean to me now every hot girl ever has a bald head does that mean I can go bald again or what," she wrote.

Like Halsey, Tiffany Haddish also received criticism online after shaving her hair. After cutting off her dreadlocks in one video, Haddish addressed critics in a second clip. She captioned the video: "For the people that think I lost my mind."

"Why when a woman decides, 'Hey, I'm gonna cut this hair off because I wanna see my scalp,' she gotta have a mental problem?" Haddish said in a video. "Nothing is wrong with my brain, you guys. I'm not suffering from no emotional s—, nothing. I've literally been talking about this for years — how I wanna see my scalp."

"I know every single part of my body," she continued. "I know where every single mole is. Anybody that's ever done my hair has heard me say — what up Oscar, hey boo — anybody that knows me knows I've been talking about this for a long time."

While Haddish added that she shaved her hair to give herself a new perspective and hassle-free style, many women sometimes cut or shave their hair to revive damaged strands and create new growth, particularly in the natural hair community.

As Allure's Janell Hickman wrote in 2018, the "big chop" is nothing new. In recent years, more women — including celebrities like Tamar Braxton and Keke Palmer — have cut their hair to start their natural hair journey. Sometimes the big chop requires women to shave the majority of their hair. In other instances, however, the process is more gradual and can be achieved by first cutting layers and bangs, as Allure notes.

Highlights Vs. Lowlights: Which Style Is Best For You

Ready to Grow Out Your Pixie Cut? Read This First