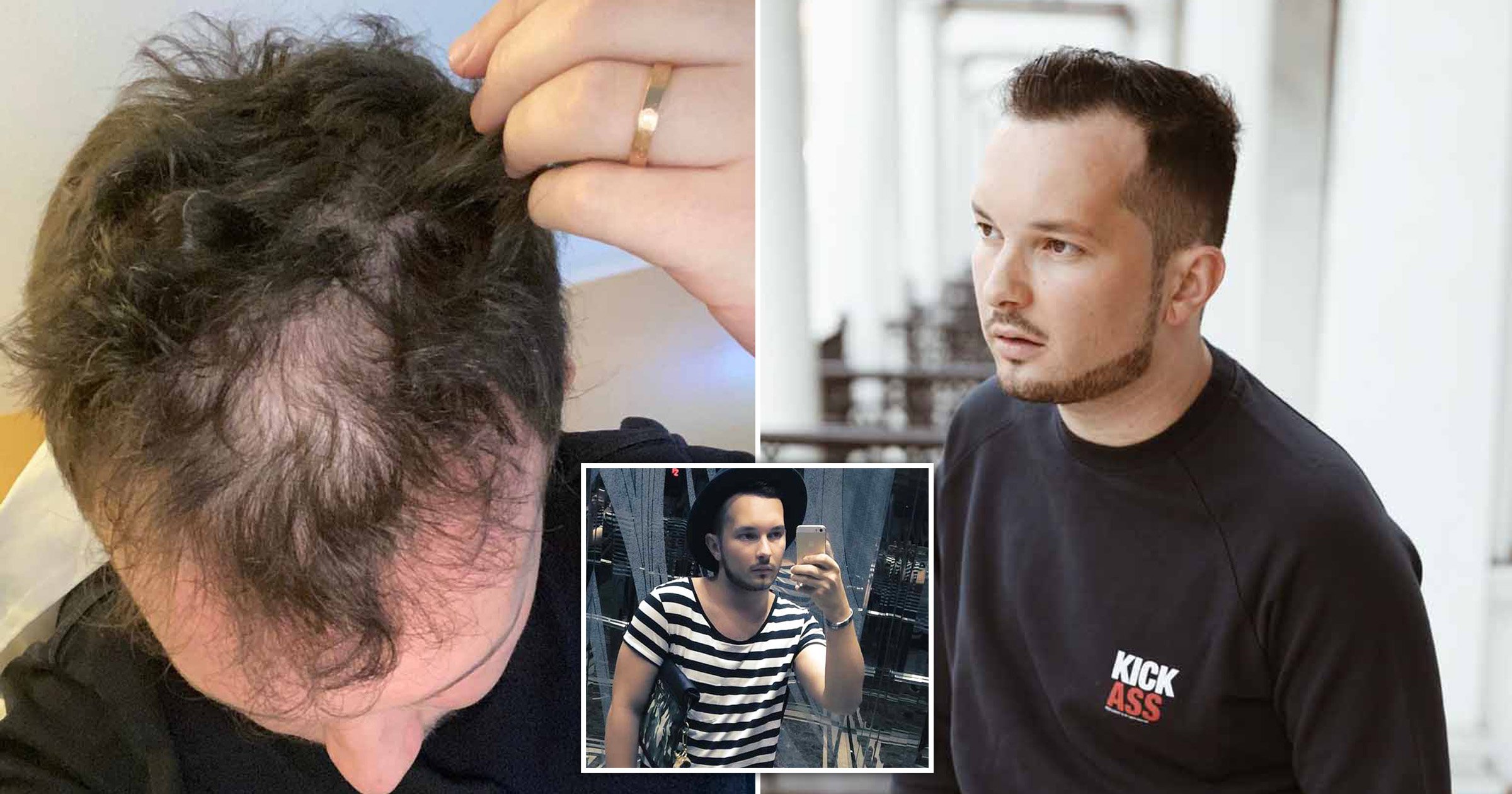 Hair loss can have a huge impact on how a person feels about themselves, as one social media influencer discovered when he experienced male pattern baldness.

With more than 95,000 Instagram followers, he’s revealed how his struggles with self-image left him avoiding mirrors – even triggering agoraphobia, which is a fear of being in crowded places, leaving the home, or being in spaces where escape is difficult.

Cosmin Cernica, 28, who lives between London and Dubai, and works as a social media consultant and content creator, says he avoided posting photos of himself when he started losing his hair four years ago.

Cosmin, who lives with his husband Robert, 51 said: ‘I really felt my whole world turn upside down.

‘I spent hours in the morning in the bathroom looking with a magnifying glass at my hair to see if more had come out overnight. It was like I was torturing myself.’

While lockdown gave Cosmin an excuse to stay home, even after restrictions eased, he remained a hermit, worried that friends would notice a change in his hairline.

He said: ‘It was quite a shock when I noticed my hair loss for the first time, because I was only 24 and I hadn’t considered that I would go bald, especially as I was so young.

‘For some people, especially men, they won’t be bothered about losing hair, but I couldn’t imagine myself going bald.

‘I’m completely in love with my job and what I do. I have so much passion for social media and the influence world, but it really does come with a lot of pressure.

‘In my industry, image is so important and plays a major part in everything I do, whether that is being active on social media or attending events.

‘As part of my content creating, I have to post pictures of myself, and I definitely feel under pressure to look the best I can – even sometimes feeling I need to edit or crop pictures, as I fear a backlash and worry about what people would say if I didn’t look the part.’

His fears began to seep into other aspects of his life – even ruining holidays with his husband.

‘Whenever we were travelling, my husband would want to take photos of us together while sightseeing, but I would never take my hat off,’ said Cosmin. ‘I couldn’t just switch off, I worried about my hair all the time.

‘There was even a time where, we were going through airport security, and I was asked to remove my hat. I started crying in front of everyone. Even now it makes me emotional to think about it. I was just so insecure.’

Eventually he avoided leaving the house and considered having a hair transplant.

He said: ‘I was on the verge of going through with the procedure when Covid hit.

‘I had hoped to get it done in Turkey or Romania but travelling was out of the question.

‘On top of that, lockdown meant I barely left the house and when restrictions started to lift, I was still reluctant to be seen by people I knew.

‘My hairline was constantly getting worse, and I was so self-conscious about it.’

Then he began keeping track of how much hair he was losing on a daily basis.

‘I was desperately sad. I knew it was down to stress, but it just made me feel even worse. It was a spiral.

‘At my lowest, I avoided the mirrors in the house and each morning I would run a lint roller over my pillow to check how much hair had fallen out.

‘After that, I would always cry.’

In the end, he decided to not have a hair transplant, instead regularly taking pills to promote hair growth.

He’s speaking out about his experience to raise awareness of the impact hair loss can have, and to encourage men to seek treatment.

‘It was getting to the point where I was scared to wash my hair because I didn’t want to put any added pressure on my scalp,’ he said.

‘I now take a daily pill which thickens the hair I still have, although it doesn’t help my receding hairline.

‘I follow the treatment religiously and I also massage a special hair loss foam into my head twice a day and no longer blow dry my hair. After just three months, I noticed a big difference. There was no more shedding.

‘The spots where I had alopecia aren’t completely back to normal yet, but they’ve started to grow back.’

The biggest change for Cosmin has been in his confidence.

He said: ‘Since the hair has started to regrow, I’ve been able to see people face to face again and get back to the job I fell in love with.

‘These days, there are added pressures to look a certain way and keep up appearances because social media is a big part of everyone’s lives. For me that pressure is tenfold because it is also my job.

‘I think for men to discuss struggling with hair loss is quite a taboo topic. Many men suffer in silence, because it’s expected of us not to worry about these things but, in reality, it can destroy our confidence.

‘I want people to know that there is treatment out there, it doesn’t need to become such a negative experience in life.’