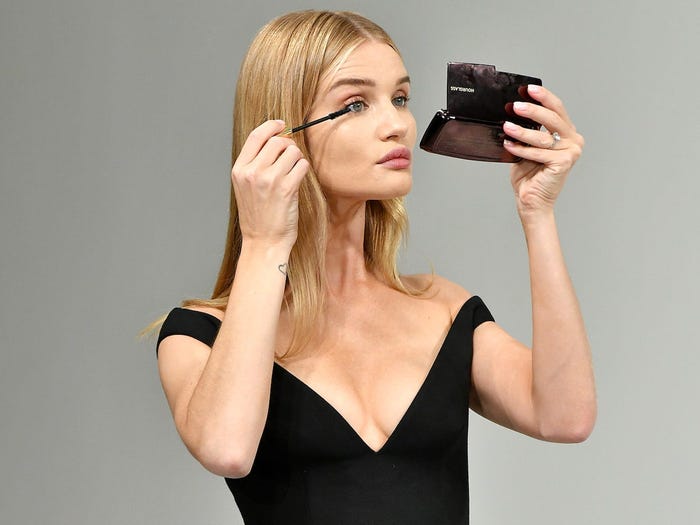 Hourglass Cosmetics is relaunching a fan-favorite product  — but some shoppers and beauty influencers are majorly disappointed.

Last week, the cruelty-free cosmetics brand announced that it has reformulated its popular llume Sheer Color Trio, which has not been available to purchase since 2019.

While many fans were ecstatic about having another chance to try the beloved product, others pointed out a major flaw: the cream compact is only sold in one variation of shades, which mainly suits lighter skin tones.

Now, makeup artists, influencers, and beauty fans say they're boycotting the brand, as they feel Hourglass Cosmetics is not entirely inclusive to people of color.

Christine Mielke is the editor-in-chief of Temptalia, a website she created in 2006 to share swatches and in-depth reviews of beauty products. On November 11, she expressed disappointment on Twitter after seeing that Hourglass Cosmetics chose to re-release its llume Sheer Color Trio with only one set of shades.

"Wow, @HourglassMakeup reformulates + relaunches the Illume Trio… again in one single variation," she wrote. "To the DNR (do not review) list Hourglass goes. The commitment to exclude deeper skin tones is on another level."

In response to a reader, she added that the cream blush, highlight, and bronzer trio is "the exact type of product that NEEDS multiple versions to address the spectrum skin depths + undertones."

"This is a permanent, core product, so to take time to reformulate it and not also extend the shade range? 😒" Mielke said.

In an email to Insider, the Temptalia founder said she's been using Hourglass Cosmetics products for over a decade. While she noted that she feels the brand has "a product miss here and there," Hourglass Cosmetics mainly offers "some incredible formulas" and "high-quality products that have become cult favorites within the beauty community," in her opinion.

Still, she said she was disappointed when the brand released its holiday collection — which features two powder compacts that largely suit lighter skin tones. So when she noticed the llume Sheer Color Trio would be sold in one shade variation shortly after, it became the "very last nail in the coffin" for her.

"There are few brands who have had the level of customer feedback to increase their shade ranges, especially in products like the Illume trio, where we know one blush doesn't fit all, one bronzer doesn't fit all, etc.," Mielke said. "So the fact that they discontinued it, let it stay off the market while perfecting the reformulation, but did not deign to release more than one version of a product that begs to have multiple versions to address the needs of the full spectrum of skin tones says that they're not interested in shade diversity, full stop."

"I've noted Hourglass' lack of inclusivity in their products like their popular holiday Ambient Lighting palettes for years, and seeing them reformulate to be vegan but not to diversify the shade range for a core, permanent product makes it impossible to give them any benefit of the doubt going forward," she said.

Mielke's public declaration has since inspired other influencers, including makeup artist and YouTuber Samantha Ravndahl, to also boycott the brand.

"I'm going to be following in @temptalia footsteps and will no longer be reviewing or working with @HourglassMakeup until/unless they make a statement regarding their lack of inclusivity in recent launches with a plan as to how they intend to change that," Ravndahl wrote on Twitter.

In following tweets, she added that while she believes many beauty brands "continue to lack in terms of inclusivity," she's particularly disappointed in Hourglass Cosmetics because she feels the brand "made a clear statement about where their priorities lay" when it released its latest product with only one shade variation.

Representatives for Samantha Ravndahl declined to comment when contacted by Insider.

Shoppers have consistently expressed frustration with the brand across social media. On Instagram, numerous people responded to a recent post from the brand and criticized the lack of diverse shades available in its newest product.

"The lack of shade range is beyond disappointing," one Instagram user wrote. "Ignoring the feedback makes it worse."

"Please stop ignoring comments and DMs that are VERY valid calling you out on this shade range," another person wrote to Hourglass Cosmetics. "I'm so incredibly disappointed. I've been a long-time fan of your brand but I can't in good faith support you if you're not going to become inclusive."

Beauty lovers have also taken to Twitter in previous months to express their shared belief that Hourglass Cosmetics might not value all customers equally.

Mielke of Temptalia told Insider she feels the beauty industry "has a long way to go" in terms of addressing its clear lack of diversity and inclusion in various areas.

"Even brands that have better track records still drop the ball and do stupid things that you can't believe they managed to do," Mielke said.

While she does think Hourglass Cosmetics and other brands with limited shade ranges can improve, she's not sure that they could ever fully gain back the trust of a diverse set of consumers.

When asked if she'd ever support Hourglass Cosmetics again, Mielke said: "Hourglass would need to address their lack of inclusivity in their various shade ranges — that's more than just a foundation range — publicly with a proper apology, a specific plan of action, and then we'd actually have to see that plan come to fruition."

Still, she said she wouldn't forget that days after Hourglass Cosmetics began to receive criticism in response to its single-shade variation product, the brand "continued to post business-as-usual" — and "none of it was good."

Representatives for Hourglass Cosmetics did not immediately respond to Insider's request for comment.

Kobe Bryant's Sister Just Got a Sweet Tattoo Honoring the Athlete and His Daughter, Gigi