General Charles Q. Brown Jr., 58, grips his dumbbells tightly, never taking his eyes off the timer beside him. It beeps once, and he battles through 40 seconds of squats. After a 20-second rest, another beep pushes him into reverse lunges, and now he’s panting hard. That doesn’t stop him from grabbing the dumbbells again, pulling them to his thighs just slightly, and then curling the weights and pressing them overhead on the third beep.

Sure, he’s gassed, but today’s workout calls for tight 40-seconds-on, 20-off intervals. And the Air Force’s chief of staff never deviates from his plan. “To me, it’s cheating if I take more rest,” he says during one breather. “I try to stay as close as I can to whatever it says on my timer.

The general loves these morning sessions at the Pentagon Athletic Center, because they’re his one chance every day to be in complete control before the chaos begins. He takes his control seriously, keeping his favorite workouts on a spreadsheet, sortable by equipment and time limit. “I have a whole repertoire of workouts,” he says, “and I [choose them] based on the layout of the gym I go to.” 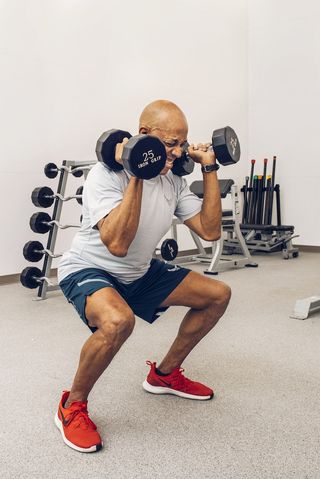 He does all this before the insanity of meetings and intel reports and travel that’s become his workday. Brown took over as Air Force chief of staff last August, becoming the first Black chief of a U. S. military service. The former F-16 pilot, who’s logged 130 hours in combat, is responsible for the organization, training, and equipping of the Air Force’s 689,000 members. He’s pushing a new emphasis on fitness and upgrading the Air Force fitness test to be more functional.

Brown builds his own workouts around those same principles, no matter where he is. He visits bases around the country several times a month. And when he’s not traveling, he’s making the rounds on Capitol Hill, advising the secretary of defense—and plenty of others—on foreign and domestic affairs. “I spend a lot of time talking to members of Congress and their staffs,” he says. “If they say they want to talk to you, your calendar will explode to accommodate.”

His workday begins by 7:40, about an hour after his sweat sesh wraps up. He tries to be home by 6:00, but he’s often still reading reports until he finally heads to bed by 11:00. Every day, Brown says, is “just a little bit different,” but this doesn’t bother him. “I personally like the pressure of getting things done.” 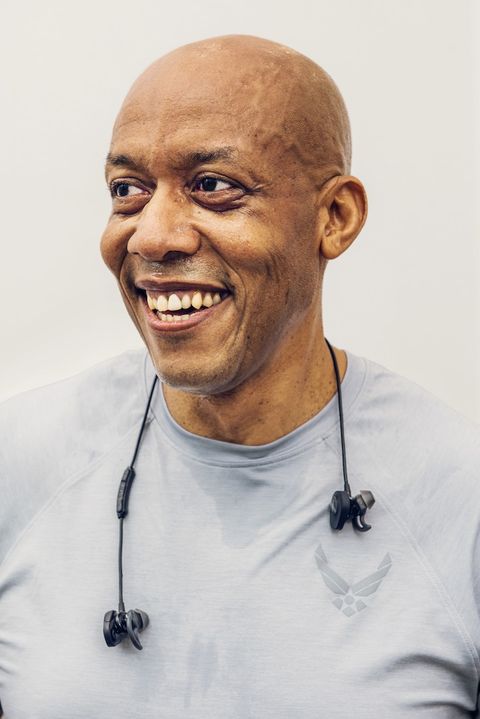 Six days a week, his workout reinforces that, serving as an ultrascheduled dose of kinetic activity. He started building out his spreadsheet seven years ago, when he was deployed to Qatar. Before that, he’d spent most of his Air Force service far from squats and burpees. “Early in my career,” he says, “I knew where the Burger King was—but not the gym.”

In Qatar, though, he was far from his wife and two sons, so he filled the void with gym time. But it wasn’t about muscle pump. He loved the challenge of HIIT, wanted the “pressure of actually getting it done.” He began studying CrossFit’s website, regularly doing its workout of the day. He also borrowed workouts from a tiny periodical called Men’s Health. He’d store his favorite ones on a spreadsheet so he could repeat them. Ten months later, he returned stateside down 15 pounds.

“It’s one of those things that became part of my routine,” he says. Even when Brown travels overseas, he still starts the day with a 5:30 session—and it’s one of his secrets to beating jet lag. “It helps with my body clock as well,” he says.

It doesn’t feel that way right now, though, because he’s finishing this 30-minute workout with his gym nemesis, the burpee. He’s gutting out the devil’s press, a burpee variation that substitutes a dumbbell overhead swing at the end of every rep, and by the conclusion of this 40-second interval, the general is spent. But he’ll be back tomorrow for another workout—and he plans to keep picking a session off his spreadsheet for years to come. “I may have to start adding some other exercises, because I may not be able to move as fast,” he says, “but I will keep the spreadsheet and continue to work out.” 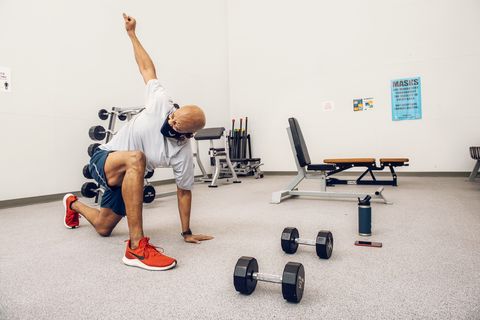 Brown does exercises that get results, even if he hates them. Try this bodyweight circuit built from 3 moves he hates. Rest 15 seconds between rounds. Do 3 rounds.