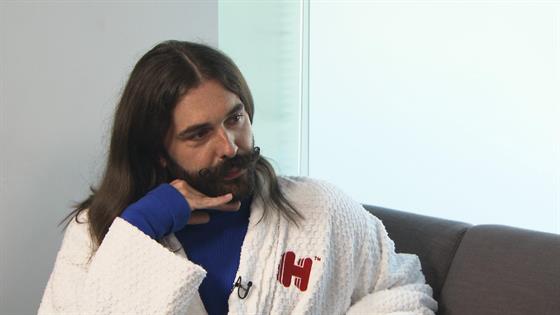 Jonathan Van Ness has a message for people who want to cut their hair amid social distancing but don’t know how: Don’t.

The Queer Eye star shared these words of wisdom on Tuesday’s at-home edition of The Tonight Show Starring Jimmy Fallon.

“I think the most important advice is to not. It’s just to not do it. Just don’t do it,” the grooming guru said. “You know, the average human head grows between a quarter of an inch and a half an inch of hair a month. So, worst case scenario, this is going to give you like—what—two inches, three inches of hair. It’s like, try a new look. Maybe you need a shag; maybe you need a new little bit of length. Yeah, like, save your haircuts. Because what you don’t want to do is mess up your hair so bad that you’re still growing that thing out after the quarantine.”

Van Ness, who identifies as non-binary and genderqueer and prefers he/him pronouns, also talked about his new children’s book Peanut Goes for the Gold.

“Growing up, I loved children’s books. Don’t get me wrong. Like, the classics were amazing…But I think I would have been very comforted as a child to have known that there was, like, a fierce, non-binary guinea pig who was going to seize a medal at the junior national championships—or at least would have the opportunity to go to the junior national gymnastics championships,” the Netflix celeb said. “So, I knew that I needed to, like, create that space, very much like what Peanut did.”

In addition, he spoke about his CATV Mews program on social media and even brought out one of his cat reporters.

Watch the video to see the interview.

(E! and NBC are both part of NBCUniversal).

This is Bubzbeauty’s secret to a perfect nighttime skincare routine

This Is the Supermodel Way to Minimize Cellulite and Ingrown Hairs