Anne Hathaway no longer wants to be referred to by the name everyone knows her as.

The “Oceans 8” actress said as much on Tuesday evening’s episode of “The Tonight Show Starring Jimmy Fallon,” where she told the comedian that hearing “Anne” from anyone other than her mother makes her rather uneasy.

“The only person who calls me Anne is my mother, and she only does it when she’s really mad at me, like really mad,” the Oscar-winning actress told the late-night host. “So every time I step out in public and someone calls my name, I think they’re going to yell at me. People are like, ‘Anne!’ And I’m like ‘What? What did I do?’”

Despite Hathaway’s first name actually being Anne, the “Devil Wears Prada” said when she’s worked on some film projects, other costars and the like have abided by her wishes and refrained from calling Hathaway by her birth name.

ANNE HATHAWAY ELABORATES ON WHY SHE’S DONE DRINKING: ‘IT MAKES ME UNAVAILABLE FOR MY SON’

“People are so lovely, they don’t want to be presumptuous, and so I think they come up with workarounds on set because the truth is nobody’s comfortable calling me Anne ever. It doesn’t fit. I’m an Annie,” Hathaway pressed. “People call me ‘Miss H,’ people call me ‘Hath,’ so feel free, call me anything but Anne.”

The 38-year-old mother of two and wife of Adam Shulman added that she actually regretted using her legal name when she did a commercial at age 14 and was asked how she wished to be addressed upon receiving her SAG (Screen Actors Guild) card.

“They asked me, ‘What do you want your name to be?’” recalled the “Princess Diaries” star. “And I was like, ‘Well, it should be my name. My name’s Anne Hathaway.’ So that seemed like the right choice, but it never occurred to me that for the rest of my life, people will call me Anne.” 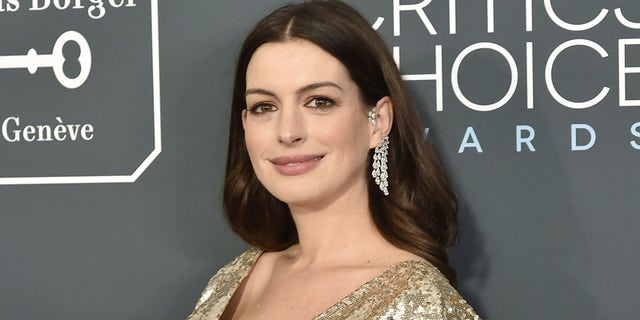 Anne Hathaway said she no longer wants to be called Anne Hathaway. (Photo by David Crotty/Patrick McMullan via Getty Images)

These days, Hathaway is a household name in showbiz and is set to star alongside Chiwetel Ejiofor in “Locked Down,” which will stream on HBO Max.

Kim Kardashian REFUSED To Be Filmed From The Waist Down In Paris Hilton's Doc – But Here's Why!

Olympic athletes told they will get Covid vaccine ahead of Tokyo, Mo Farah claims