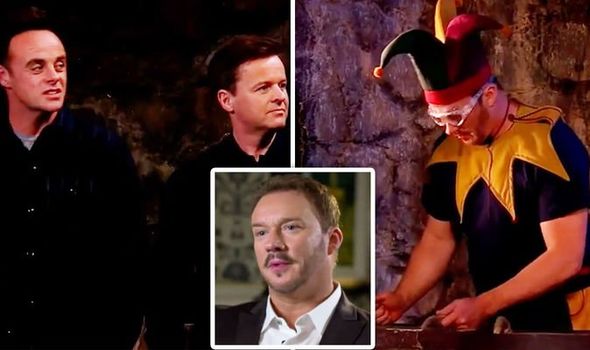 Presenters Ant McPartlin, 45, and Declan Donnelly, 45, have spoken out after some I’m A Celebrity… Get Me Out Of Here! 2020 viewers accused Russell Watson, 53, of “cheating” by “using his hands” during his Bushtucker Trial.

The tenor joined his campmates at Grywch Castle for the first time on the show this evening, alongside fellow newbie Ruthie Henshall, 53, and they had to face the Stage Fright Trial as the other contestants watched.

The first part of the Trial was called Laughing Stocks and was worth five stars for camp.

Ruthie was in a stock and had to read the first part of a joke and Russell was then tasked with finding the punchline hidden in a barrel using only his mouth.

However, some I’m A Celebrity fans were sceptical and wondered whether Russell was sticking to the rules, as he appeared to “use his hands” to search for the punchlines.

One person took to Twitter and asked Ant and Dec what their thoughts were on the matter.

They wrote: “Is it just me, or is Russell using his hands? @antanddec.”

Other fans took to the comments section of the viewers’ tweet to reveal they felt suspicious of Russell too.

Another added: “On the last 2 barrels, cheat.”

A third person replied: “That’s what I thought!”

Ant and Dec spotted the viewers’ claims about Russell and hit back that they should “give him a break” after the singer unfortunately chipped his tooth during the Trial.

The Geordie duo’s official Twitter page wrote back in view of their 6.7 million followers: “Poor fella’s just chipped his tooth, give him a break! [crying with laughter emoji].”

Eva Mendes Shares a Rare Selfie, Jokes She ‘Just Can’t Do It’

Ariana Grande Mum On Allegedly Ripping Off Nokia for '7 Rings'

Bradley Walsh wife: The GLAMOROUS wife who once appeared in THIS 80’s music video