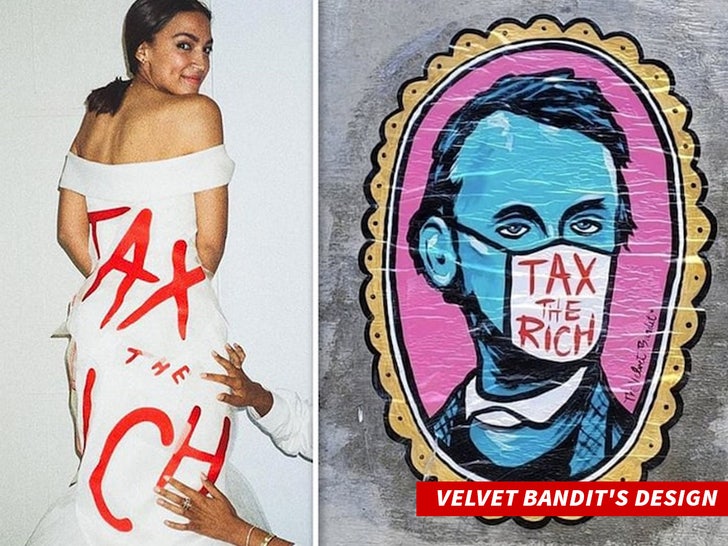 Rep. Alexandria Ocasio-Cortez‘s Met Gala dress looks like a carbon copy of one designer’s own brand — at least according to the designer, but she doesn’t want a fight … just a collab.

An IG user who goes by the Velvet Bandit posted photos of AOC in her “Tax the Rich” dress stacked up against some artwork she claims to have designed … and says something looks a little too familiar. Specifically, she’s talking about the font and typeface of the words themselves.

VB writes, “@AOC stepped out at the Met Gala wearing a dress designed by @aurorajames that looks hella similar to my design. 😳”

Velvet continues by saying her own “Tax the Rich” thing went viral on TikTok after putting her work up all around Sausalito, CA, and she adds … “This dress bears the same likeness as my handwriting.” Sounds ominous, but she simmers down.

The street artist doesn’t seem particularly litigious … saying she admires both AOC and the designer of her dress, Aurora James, and would like nothing more than to work with them.

She says she’s a lunch lady and a single mom, and doesn’t have the time or influence to try to reach out to famous people for gigs.

Instead, she’s asking people to tag and/or share this with the congresswoman and her designer, adding … “They need a female street artist working on their team, dontcha think? It would be an honor. Obviously they have fabulous taste.” Well … (de)escalated quickly. 😅

We’ve reached out to AOC and Aurora James … so far, no word back.

Mama June’s Daughter Pumpkin Takes Her Own Little One Ella, 3, To Get Her First Haircut – Photos

Sarah Paulson and Rihanna Are Still Close Friends, and Their Texts Prove It

Jen Harley to Ronnie Magro: You’re Not the Only One Who Can Bang Someone New!