Joseph Baena now looks exactly like his dad Arnold Schwarzenegger’s mini-me from is bodybuilding days. He showed off his bulging muscles, posing in new photos.

Arnold Schwarzenegger must be so proud of his son Joseph Baena. The 23-year-old has followed in his dad’s footsteps into the world of bodybuilding, and is a chip off the old block of his former Mr. Universe father. The Pepperdine University grad showed off how he can pose like a pro in new Instagram photos that Joseph shared on March 5. He wore super short-shorts, as to let as much of his bulging thigh muscles show.

Joseph has been working on his bodybuilding career steadily for several years now, ever since his latter years in college. He has all of the competition poses down to an art form. Joe showed off the most famous one, with his arms curled upwards in the front double bicep pose, which is one of the mandatory poses in men’s bodybuilding competitions. It allowed Joseph to flex his biceps as well as his incredibly ripped lats. He hiked up his grey drawstring shorts so that his huge thigh muscles could be seen in all their glory.

Joseph could next be seen doing another required competition pose, the side chest pose. He stood with his left side facing the camera, but turned his chest forward to show off his impressive pec muscles as well his muscular toned delts, triceps and outside biceps. 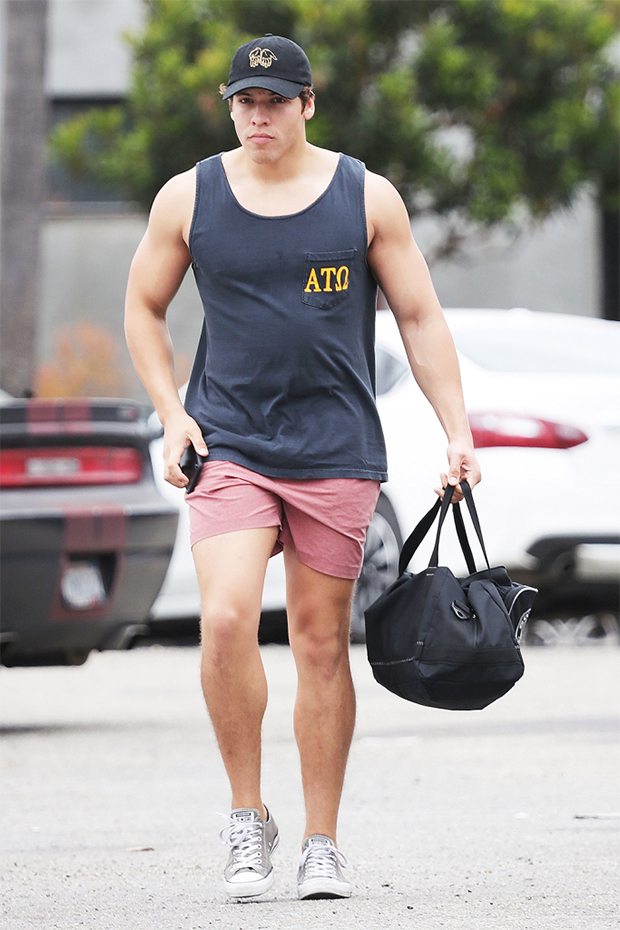 Joseph could be seen inside one of the iconic weight lifting chain Gold’s Gym locations, looking as buff as the body builders in the posters on the walls. The title “Mr. Olympia” lettering could be seen on one of the back walls, which is a contest that Joseph’s dad Arnold won seven times between 1970 and 1980.

Actor and fellow body builder Shaun Perry commented, “Wow Joe looking great. I can tell you’re really putting in all the effort!” as Joe proudly replied, “yessirrr.” Others gushed how he’s become a his dad Arnold during the former California governor’s bodybuilding heyday. Fan @jessyj318 noted, “Definitely his dad’s son,” while user @marko018754 told him, “@projoe2 you look more and more like your dad.” @nazaketaliismaeel called him the “Next Arnold Schwarzenegger,” while fan @patricksimkam had a great movie casting idea, telling Joe “Just be the new Conan the Barbarian!” in a remake of the 1982 film role that launched Arnold into a career as a movie star. Joseph certainly has the body and his famous father’s face, so that wouldn’t be a stretch!