With a top cast and an Oscar winning director, Stillwater should sparkle… instead, it falls flat, writes BRIAN VINER

The Last Letter From Your Lover (12A)

All films fall broadly into one of three categories: they are either more than, equal to, or less than the sum of their parts. Stillwater belongs squarely in that third group.

It boasts Hollywood’s most reliable leading man, in the solid form of Matt Damon. As female lead, it has Camille Cottin, the beguiling French actress who will be familiar to fans of the glorious Netflix series Call My Agent!.

The director and co-writer is Tom McCarthy, whose splendid 2015 film Spotlight was nominated for six Academy Awards and won two, including Best Picture.

And it is inspired by the compelling story of Amanda Knox, the American student convicted of murdering her British flatmate Meredith Kercher in Italy in 2007, but later exonerated.

All that is more than enough to get expectations bubbling, but Stillwater works only in fits and starts. It is further blighted by insistently jaunty piano music that undermines and cheapens the drama. 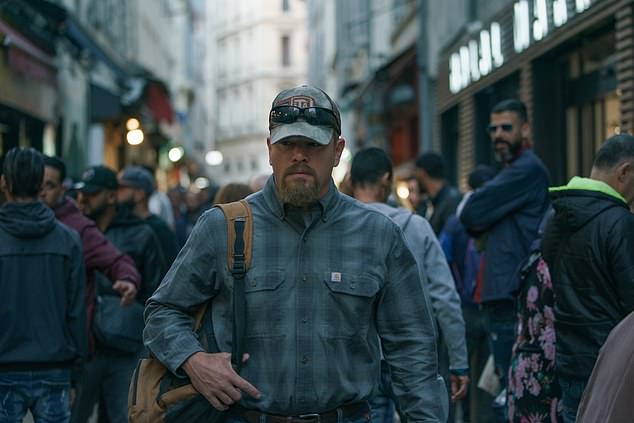 Matt Damon stars as ‘Bill’ in director Tom McCarthy’s ‘Stillwater’. All films fall broadly into one of three categories: they are either more than, equal to, or less than the sum of their parts. Stillwater, BRIAN VINER writes, belongs squarely in that third group

He lives in the blue-collar town of Stillwater, Texas, but is now working on construction sites to fund his regular trips to Marseille, where his daughter Alison (Abigail Breslin) is serving a nine-year sentence for killing her French-Arab girlfriend. Alison insists she was wrongfully convicted; Bill is doing all he can to help her prove her innocence.

This situation is complicated by their uneasy relationship. Bill seems to us like a pretty decent, hard-working, well-meaning cove, but to Alison he’s serially messed-up and feckless, evidently on account of chronic past misdeeds. Yet there is no sign of these misdeeds, even in flashback. So we’re being asked to believe in something when all evidence is to the contrary, a narrative hump that the film never really overcomes.

Then, with the French lawyers having washed their hands of Alison’s case, Bill befriends a local actress called Virginie (Cottin).

This unlocks a whole different set of narrative problems as the picture changes tone as jarringly as Chopin giving way to Scott Joplin, seeming almost to forget about the imprisoned daughter while a laughably unlikely romance blossoms between the Texan roughneck and the sexy French woman. 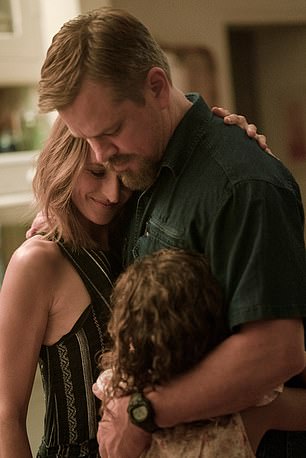 (L to R) Camille Cottin as ‘Virginie’, Matt Damon as ‘Bill’ and Lilou Siauvaud as ‘Maya’ in Stillwater

Of course, it’s Damon and Cottin, so it’s hardly a surprise to find them falling for each other, and their bond is cemented by Virginie’s cutesy eight-year-old daughter Maya.

She thinks Bill is just terrific, enabling a clunkily obvious contrast with Alison, who thinks he’s a jerk.

Oh yes, Alison. It turns out Bill hasn’t forgotten about her, because when he lovingly takes Maya to see her beloved Olympique de Marseille football team, he sets eyes in the enormous crowd on the one man who seems to hold the key to the whole case.

This slab of cinematic serendipity cues another tonal lurch as Bill goes violently rogue, but I’ll say no more, except to reiterate that Stillwater is a whirlpool of improbable plot twists, dramatic misjudgments and silly music.

Soulful strings and poignant piano are on overtime again in The Last Letter From Your Lover, Augustine Frizzell’s soppy adaptation of the bestselling Jojo Moyes novel.

The story is set across two time frames, with a modern-day journalist, Ellie (Felicity Jones), prompted by some swooningly passionate letters she finds in a dusty newspaper archive, obsessively unearthing the details of a doomed mid-1960s love affair.

Our love birds are Jennifer (Shailene Woodley), an American socialite stuck in a dreary but well-resourced marriage to Laurence, a lavishly rich but one-dimensionally horrid industrialist (Joe Alwyn), and Anthony (Callum Turner), a foreign correspondent sent to the South of France to interview Laurence, who is conveniently called away on business for as long as it takes for him and Jennifer to fall hopelessly in love. 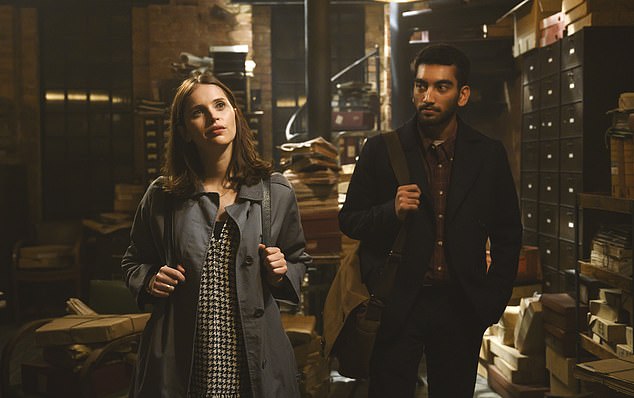 The Last Letter From Your Lover, Augustine Frizzell’s soppy adaptation of the bestselling Jojo Moyes novel, is set across two time frames, with a modern-day journalist, Ellie (Felicity Jones, pictured left), prompted by some swooningly passionate letters she finds in a dusty newspaper archive, obsessively unearthing the details of a doomed mid-1960s love affair

Improbabilities, large and small, abound. They spend a casual Riviera afternoon on a seemingly unskippered yacht, drifting blissfully to within sight of Corsica. That’s the kind of drifting that requires ferocious jet propulsion, but never mind.

More problematic is the sense, compounded by the watery chemistry between Woodley and Turner, that Jennifer has embraced infidelity mainly to relieve crushing boredom.

In the meantime, the story contrives an awkward parallel romance between Ellie and Rory (Nabhaan Rizwan), the shy archivist helping her.

There are duly some predictable nods to the differences between billets-doux then and now (how many kisses should you add to a text message, that sort of thing).

But the script by Nick Payne and Esta Spalding makes humour an exclusively modern phenomenon. Their past isn’t just a foreign country, it’s a cripplingly earnest foreign country.

Frizzell does her best with all this, and it’s all jolly nice on the eye (even if she’s a little over-fond of the overhead shot, as if she’s only just discovered the drone camera), but as befits a film in which amnesia following a road accident is a key plot device, it is distinctly forgettable, the quicker the better.

Lin-Manuel Miranda, the prodigiously talented creator of Hamilton and other money-spinning musicals, voices the title character in Vivo, a lively Netflix animation for which he has also written original songs.

Vivo is a kinkajou, otherwise known as a honey bear, who works in Havana, Cuba, as sidekick to an elderly street musician called Andres.

Then Andres gets a letter from his old singing partner, Marta, now a superstar based across the water in the U.S. and voiced by the mighty Gloria Estefan, inviting him to take part in her retirement concert in Florida.

Vivo (pictured right) is a kinkajou, otherwise known as a honey bear, who works in Havana, Cuba, as sidekick to an elderly street musician called Andres

Alas, the old boy expires before he can get there to sing with Marta again and also let her know just how much he loved her back in the day. So Vivo goes instead. Cue a series of colourful misadventures.

It’s appealingly family-friendly, with good tunes, and another triumph for Sony Pictures Animation.

The company is having a notably successful 2021, having also made The Mitchells vs The Machines, already the most-viewed animation on Netflix and a bona fide delight.

Zola, also set largely in Florida, has nothing to do with the writer Emile, or the footballer Gianfranco.

Rather, it’s inspired by a real-life 2015 Twitter storm ignited by a Detroit stripper known as Zola (Taylour Paige).

Persuaded by her sketchy new friend, here called Stefani (Riley Keough), to take a pole-dancing job in Tampa, she discovered that she was effectively being forced into prostitution.

It’s a decidedly quirky but (given the subject matter) surprisingly engaging film, and admirably concise at 90 minutes. 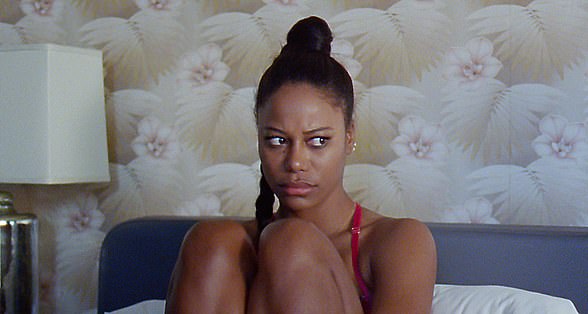 ‘Zola’ is inspired by a real-life 2015 Twitter storm ignited by a Detroit stripper known as Zola (portrayed by Taylour Paige, pictured)

The truth behind Dennis Rodman and Donald Trump as friends