Demi Moore shared two new snapshots of herself looking half her age while confidently posing in a one-piece bathing suit along with her look-alike daughters Rumer, Tallulah, and Scout, for a campaign.

Demi Moore, 58, looked like she could have been her three daughters’ sister in her latest Instagram pics! The actress strutted her stuff in a black one-piece swimsuit alongside her look-alike gals, Rumer, 32, Tallulah, 27, and Scout, 29, who were dressed in their own one-pieces for an Andie Swim campaign on July 6. The four dark-haired beauties were laying on what appeared to be a wooden dock in front of a body of water as they gave fierce looks to the camera. Check out the pics HERE!

Rumer went with a white one-piece while Tallulah rocked a red one. Scout had on a gray choice and they all had their locks down and flowing. Demi and Rumer were the only two to add sunglasses to their look. Demi gave an explanation about the campaign in the caption alongside the pics. 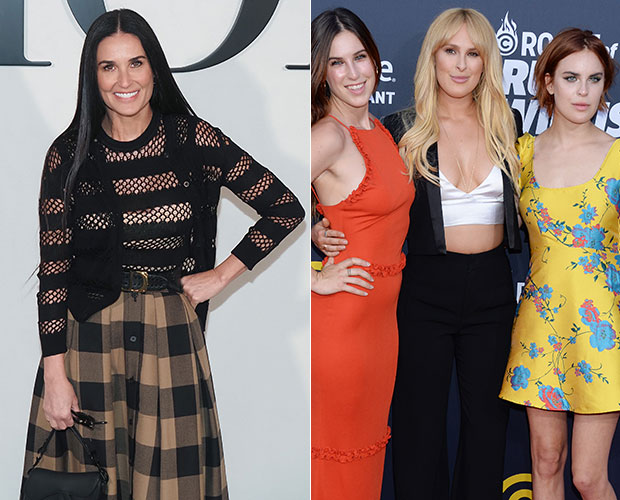 “Today is the day! SO excited to finally share @andieswim’s new campaign, celebrating togetherness and showing up for the people you love… It was only fitting that I got to share this moment with the people I love most ❤️ @rumerwillis @scoutlaruewillis @buuski,” it read.

Once the Now and Then star shared the post, it didn’t take long for her fans to take to the comments section to share compliments. “Gorgeous girls,” one fan wrote while another called them “beautiful.” A third wrote, “nice photos” and many more shared heart and heart-eyed emojis.

Demi’s latest pics aren’t the only ones she’s looked youthful in. The talented star often shares snapshots that show her and her daughters, who she shares with ex Bruce Willis, 66, in memorable moments, like the one above, and she always looks incredible. She also made headlines earlier this year when she showed off her amazing natural beauty in a pic that showed her doing some “spring cleaning” while going through old clothes. Even though she was dressed in casual clothing, including a black sweatshirt, blue jeans, and a cute leopard-print beret, she still looked radiant.