Jill Duggar’s husband, Derick Dillard, had a theory as to why his wife’s family marries so young. Derick’s brother-in-law, Justin, just revealed his engagement a day after turning 18 years old!

Derick Dillard — who married into the Duggar family — has a theory as to why his in-laws are rushing to the altar in their late teens/early 20’s! The topic was brought up after a fan took to the Instagram comments section of Derick’s wife, Jill Duggar, and expressed astonishment over news that her younger brother Justin Duggar announced his engagement just a day after his 18th birthday. “Amazingly surprised that your brother is 17 and engaged!!! Why do you guys rush to marry life. He’s a kid and [Justin’s 19-year-old fiancée Claire Spivey] too!!!,” the fan wrote underneath Jill’s Instagram post on Nov. 17. 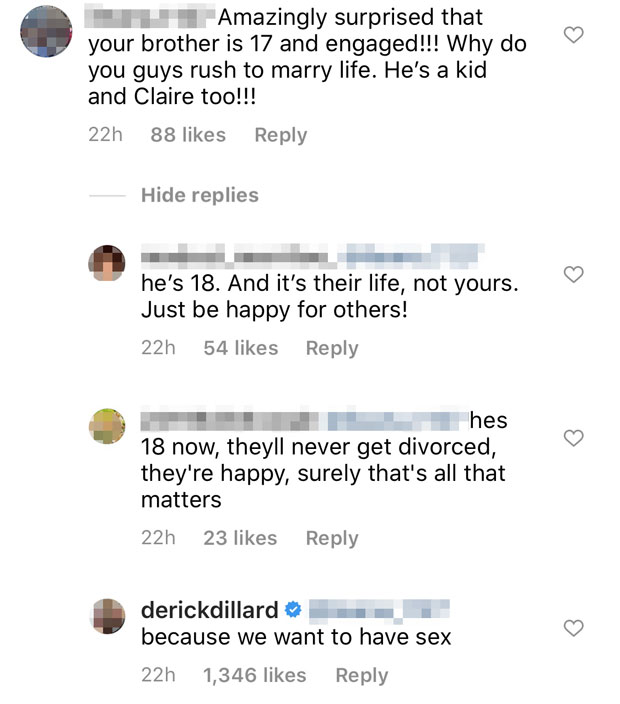 Derick hopped into Jill’s Instagram comments to answer that question. “Because they want to have sex,” he matter-of-factly wrote about the Duggar family, since their religion prevents them from having sex before marriage. Jill seemed to confirm this claim by replying to her husband’s comment with a flirty smiley face emoji with its tongue sticking out.

Jill is now 29 years old, but was only 23 years old when she tied the knot with Derick in 2014 (Derick, meanwhile, was 25 years old). Many of Jill’s 18 siblings wasted no time to leave the single life behind, too; her sisters Joy-Anna, Jessa, Jinger and Jessa also tied the knot with their fiancés before their 30th birthdays, and so did her brothers Joshua, John-David, Josiah and Joseph. However, not all immediately married — Jana Duggar, for example, is 30 years old and has chosen to remain single.

What makes Jill and Derick stand apart, though, it that they’ve made no secret of their very active sex life as a married couple. A day after Derick made the sex claim about the Duggars, Jill promoted a “Bedroom Basket” giveaway to promote a “fun and sexy app” called Intimately Us, which Jill explained gives “tons of ideas to make intimacy and sex in your relationship fun and alive!” In her promotional Instagram post — which you can see below — Jill explained that keeping her marriage with Derick “strong and passionate” is a “priority” for them.

In 2019, Jill also encouraged her fellow married fans to “have sex often” and also promoted a bedroom advice book! Jill’s frankness about her sex life has come as a surprise to fans, considering that she comes from an infamously strict Christian fundamentalist family. Jill even recently admitted that she’s “not on the best terms” with “some” of her family (she did not disclose the reason, though). “We’ve had some disagreements, but we’re working towards healing definitely and restoration, but we’re having to kind of just take some time and heal,” Jill explained in a YouTube video with her husband in Oct. 2020.

Anne Hegerty admits The Chase role in doubt for her and Mark Labbett: ‘We’re stuck’

Kylie Jenner Is ‘Not Ready’ For Pregnancy Again, But Wants ‘Seven Kids’ Eventually!