Dr. Anthony Fauci said ‘there’s no evidence’ that the COVID vaccines ’cause reproductive issues’, in an interview with Jake Tapper, after Nicki Minaj claimed it caused her cousin’s friend to become ‘impotent.’

Dr. Anthony Fauci is weighing in on Nicki Minaj‘s anti-vaccine stance during his latest appearance on CNN. The 80-year-old physician and immunologist explained to Jake Tapper that the 38-year-old rapper is “spreading misinformation” after she admitted she’s not vaccinated for COVID-19 and claimed one of the vaccines caused her cousin’s friend to become “impotent” and have “swollen testicles,” in a series of tweets, which can be seen below, on Sept. 13.

“Is there any evidence that the Pfizer, Moderna, or the [Johnson & Johnson] vaccines cause any reproductive issues, in men or women?” Jake asked Dr. Fauci after mentioning Nicki’s tweets on the CNN show, which can be seen above.

“The answer to that, Jake, is a resounding no,” he replied. “There’s no evidence that it happens, nor is there any mechanistic reason to imagine that it would happen.”

Tapper then followed up with a question about how authorities can stop spreading vaccine misinformation that’s brought on by powerful stars such as Nicki. “It’s very difficult. There is a lot of misinformation, mostly on social media,” Fauci explained. “The only way we know to counter mis- and disinformation is to provide a lot of correct information… These claims may be innocent on her part — I’m not blaming her for anything — but she should be thinking twice about propagating information that really has no basis except a one-off anecdote. That’s not what science is all about.”

Fauci’s response to Nicki comes a day after she made headlines for dropping out of the MTV Video Music Awards and 2021 Met Gala when she contracted COVID-19. “I was prepping for vmas then i shot a video & guess who got COVID?” she wrote on social media before the gala. She went on to explain that she sadly wasn’t able to be around her 11-month-old son due to the virus before also admitting she wasn’t vaccinated. 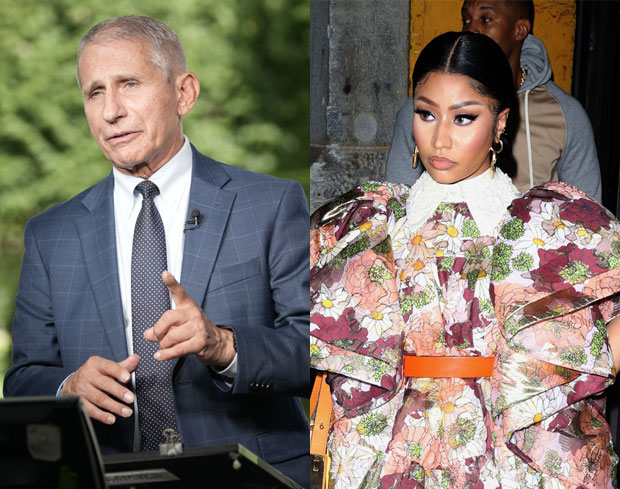 Nicki followed the tweet up with the tweet about her cousin’s friend when further talking about whether or not people should get vaccinated. “My cousin in Trinidad won’t get the vaccine cuz his friend got it & became impotent,” her tweet, which can be seen above, read. “His testicles became swollen. His friend was weeks away from getting married, now the girl called off the wedding. So just pray on it & make sure you’re comfortable with ur decision, not bullied.”

Nicki has yet to respond to Dr. Fauci’s comments.