At just 18, Bella Robertson is a married woman! The ‘Duck Dynasty’ star tied the knot with Jacob Mayo 7 months after getting engaged.

Bella Robertson, 18, and fiancé Jacob Mayo are officially a married couple. The Duck Dynasty star — who is the youngest daughter of Willie Robertson and his wife Korie — confirmed the nuptials took place on Saturday, June 5 via Instagram. Bella stunned in an ethereal white wedding dress that featured floral appliqué details over a sheer bodice. The tulle-style fabric continued into a skirt, revealing her skinny white pants underneath. Jacob sweetly kissed his bride as he interlocked his fingers with Bella’s in a romantic photo taken by professional photographer Andrew James Abajian — see the photo here:

“#MARRYMEMAYO,” the Louisiana native simply captioned the sweet post, tagging Jacob, photographer Andrew, and her hairstylist Carachele Tyvan. Jacob looked dapper in beige plaid blazer and white shirt, paired with a chino colored pair of pants. Under the hashtag, several other photos from the wedding revealed the pair had an intimate, outdoor celebration attended by friends and family including Rebecca Robertson. Guests look like they had a blast as they snapped photos in a black-and-white photo booth alongside the newly married couple! Some of the candid outdoor shots revealed Bella opted out of wearing high heels for her big day, instead choosing casual white sneakers with a blue star detail.

On May 18, the couple revealed they had received their legal marriage license at a courthouse. “signed, sealed, delivered — @jacobdmayo IM YOURS !!!!!!!” Bella gushed on the post, that showed the two holding up the piece of paper as they snuggled close.

The actual wedding celebration with friends and family came came seven moths after Bella announced she was engaged to boyfriend Jacob after six months of dating. Jacob popped the question to Bella in the most romantic way: her future husband placed a blindfold on her as he lead her into a candlelit barn. How romantic! He was even sure to capture the entire experience via pictures, which the two shared as part of their social media announcement. 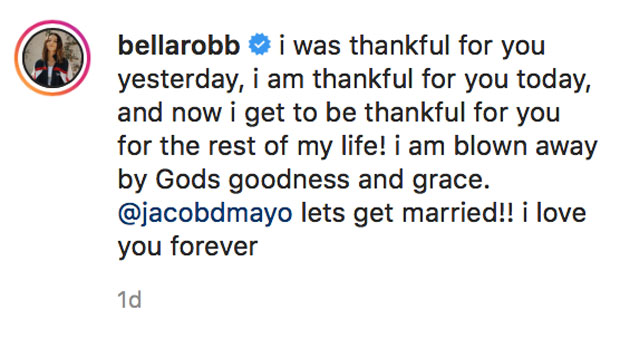 “I was thankful for you yesterday, I am thankful for you today, and now i get to be thankful for you for the rest of my life!” Bella gushed on Nov. 27, 2020 as she confirmed the big news. “I am blown away by Gods goodness and grace. @jacobdmayo lets get married!! I love you forever,” the Liberty University student added.

Jacob was absolutely over the moon when his future wife-to-be said yes. “She is my best friend. She is the person I can lean on in any problem with no judgment. But with the honest truth when I’m acting out. She loves Jesus,” he wrote alongside his own announcement, paying tribute to Bella. “She holds me to a higher standard that she doesn’t let waver. She unconditionally loves me whether I’m doing what she likes or the opposite side of the spectrum. She’s the one for me forever. She’s my everything. I thank God for her. #tothemayos,” he concluded his post. Congratulations to these two!