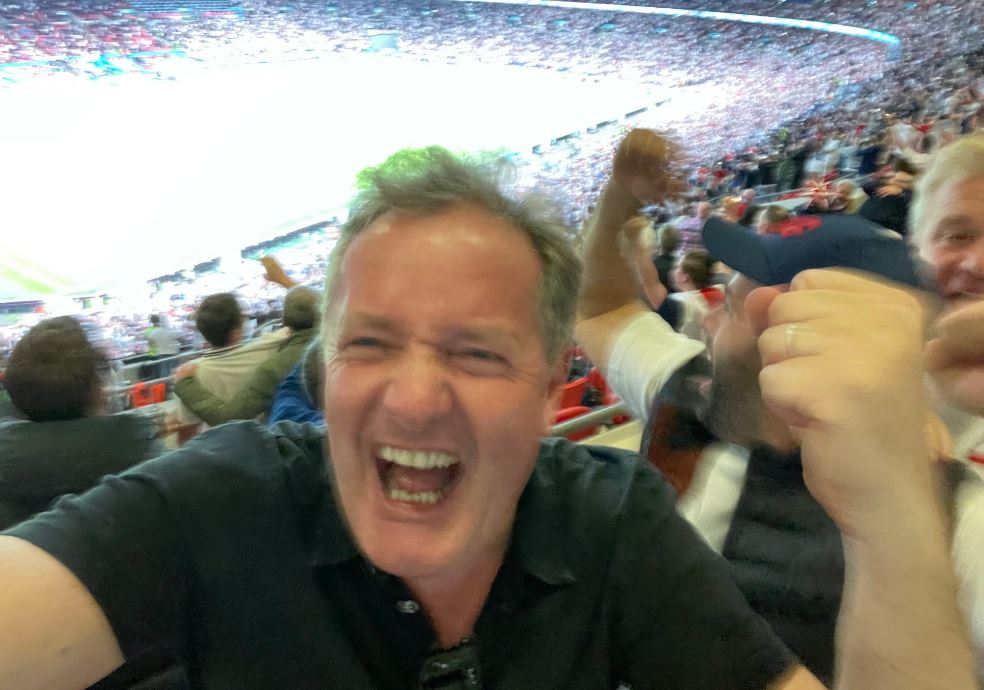 The England’s Men’s football team were the heroes of the hour after beating Denmark 2-1 at Euro 2020 for a place in the final against Italy, and the celebs came out in force with the likes of Piers Morgan, Adele and Kate Garraway celebrating their win.

Denmark led the way by scoring first in the tense match at Wembley on Wednesday night, but an own goal brought England level.

A later penalty for England saw Harry Kane initially miss, but manage to score as the ball rebounded and put his team ahead, taking them into the final.

A nation celebrated including some of the UK’s famous faces, with singer Adele posting a video to Instagram of her reaction to Kane’s goal, screaming around her front room as it went in.

Good Morning Britain star Kate Garraway was tuning in with her kids and filmed son Billy draped in an England flag and racing around the house.

She joked in the caption: ‘YAAAAAAAAS!!! #thedreamisalive – #itscominghome The final – actually a FINAL ps no celebrating 11 yr olds were hurt in the filming of this video.’

TV presenter Piers Morgan was at the match in person and posted a selfie to Twitter of his cheering face, adding the word: ‘BOOOOOOM!!!!!’.

Strictly Come Dancing star Oti Mabuse tweeted a video of herself cheering at the back of a car as she followed the match, adding a string of emoji of the England flag.

‘It means so much to them. Stay focused. Win. Win, win on Sunday. You deserve it, you’re the better team. Win.’

England will take on Italy in the Euro 2020 final on Sunday July 11.