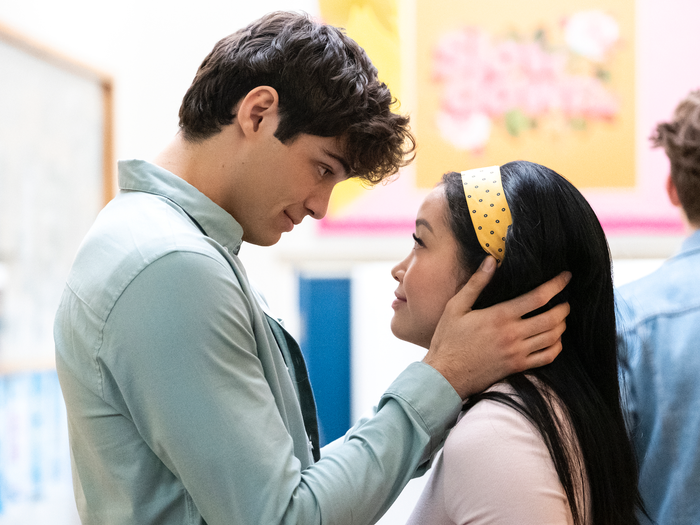 When "To All the Boys I've Loved Before" was released on Netflix in August 2018, the film revived the rom-com genre for a new generation.

The success of the movie, which starred Lana Condor as Lara Jean Song Covey and Noah Centineo as Peter Kavinsky, resulted in the streaming service developing two sequels based on a book trilogy from Jenny Han.

"To All the Boys: P.S. I Still Love You" hit Netflix in February 2020 and centered on a love triangle involving Lara Jean, Peter, and childhood friend John Ambrose McClaren (Jordan Fisher). Next, fans can see Lara Jean and Peter's story continue in the third movie, titled "To All the Boys: Always and Forever, Lara Jean."

Here's everything we know about the final "TATB" movie, so far.

Condor and Centineo will reprise their roles, but it's unclear if Fisher will return

In "TATB 2," John Ambrose's role in Lara Jean's story seemingly came to an end after the pair kissed and realized that she still wasn't over Peter.

In Han's third book, John Ambrose and Lara Jean reunite, but it's not to begin a relationship. Instead, it's to mourn the death of someone they were both close to. John Ambrose also reveals that he has a girlfriend named Dipti, who he met at a Model UN convention, and tells Lara Jean about which college he might end up going to.

It's unclear how closely the third movie will follow Han's novel. Fisher was also tight-lipped when asked if he'll appear in the movie.

"I can not confirm or deny," he told Entertainment Tonight.

For what it's worth, Fisher told Insider that he believes John Ambrose is well-suited for Lara Jean and "is the marrying type."

Like Han's 3rd novel, the final 'TATB' movie will also focus on the main characters making decisions about college and their relationship

"Y'all ain't ready for the third movie, that's all I can say," Centineo told Entertainment Tonight. "I haven't seen it cover to cover but the storyline is one of my favorites of the three [movies]."

"TATB 2" director Michael Fimognari returned for the third movie, and told Entertainment Weekly that the final installment "is very much about how your future influences your present."

"When you're a senior in high school, all these fantastic opportunities await: college and living alone," he said. "That has a profound impact on Lara Jean's ability to see herself continuing her relationships."

Similarly, Condor told Entertainment Tonight that "TATB 3" is "definitely the most mature movie."

"I think she really starts to make decisions for herself that might be unpopular but I think at the end of the day, as a young woman, you have to protect your own heart and make the decisions that are truly right for you regardless of the other people around you," the actress said.

The second and third movies were filmed back-to-back. Han spoke on Twitter about her experience in Korea in summer 2019 and Condor told ET that they "spent a lot of time" filming there, but wasn't sure how much of that footage was going to make the film's final cut.

Eagle-eyed fans also reportedly spotted Condor and Centineo filming in New York City in July 2019, which would make sense since their characters travel to New York in Han's third novel.

In August 2019, Netflix revealed that 'TATB 2' was hitting the streaming service in February 2020 and confirmed that the third film was already in production.

In January 2021, Netflix revealed that the movie will come out later in the year, though the exact date still remains a mystery.

Nikka Bella Speaks on Postpartum Depression and Artem Chigvintsev's 'DWTS' Partner: 'People Have Been Worried About Me'