Bill Nighy gifted Anna Wintour roses in a loving gesture on Thursday ahead of their dinner in Rome, after they reportedly became close following her split from her ‘husband’ of 16 years, Shelby Bryan, last year.

The Love Actually star, 71, and the Vogue editor-in-chief, 71, appeared the picture of happiness as they gazed longingly at each other during their intimate meal at restaurant Pierluigi.

Rumours have been circulating about Anna and Bill since 2015 as the pair have been spotted together at numerous fashion shows, theatres and restaurants in London and New York City. 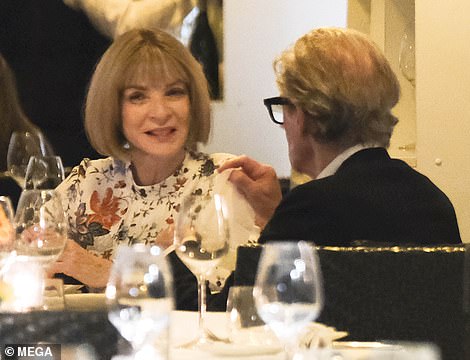 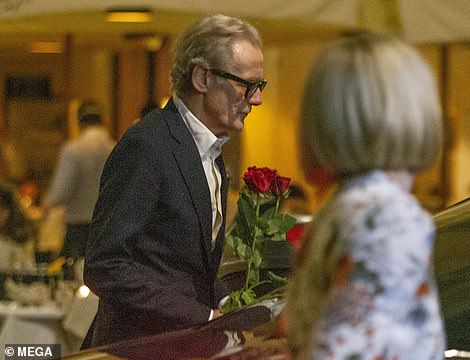 Sweet: Bill Nighy gifted Anna Wintour roses in a loving gesture on Thursday ahead of their dinner in Rome, after they reportedly became close following the split from her ‘husband’ Shelby of 16 years, Shelby Bryan, last year

And for their evening together in the picturesque Italian city, Anna slipped into a floral white dress, complete with a high neck, which highlighted her lithe silhouette.

She boosted her height with cream sandal heels and sported her signature bob hairstyle for their dinner.

The fashion mogul wore a light palette of make-up, while Bill cut a smart figure in a black blazer which he paired with grey trousers and a crisp white shirt.

The actor brushed his silver locks away from his visage which he framed with his signature chunky black glasses. 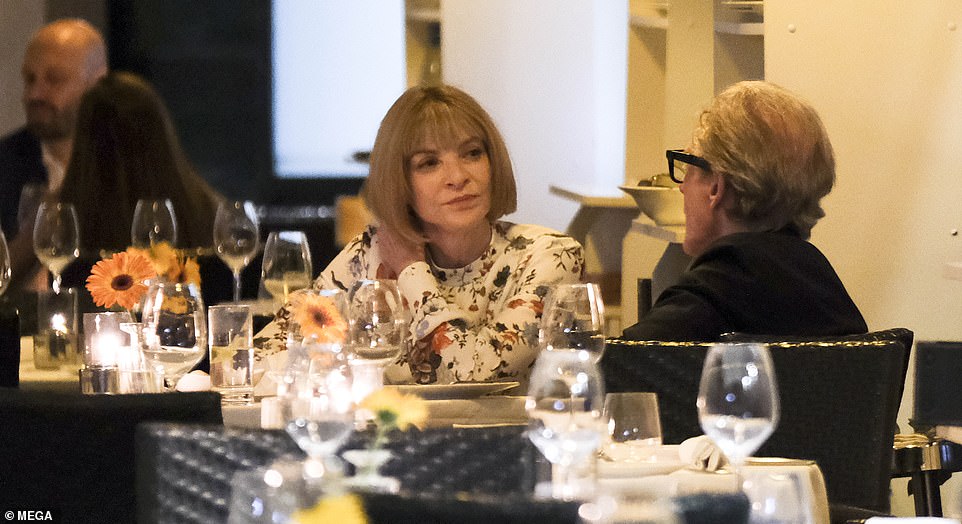 Caught her attention: And the Vogue editor-in-chief, 71, appeared relaxed as she gazed longingly at Bill 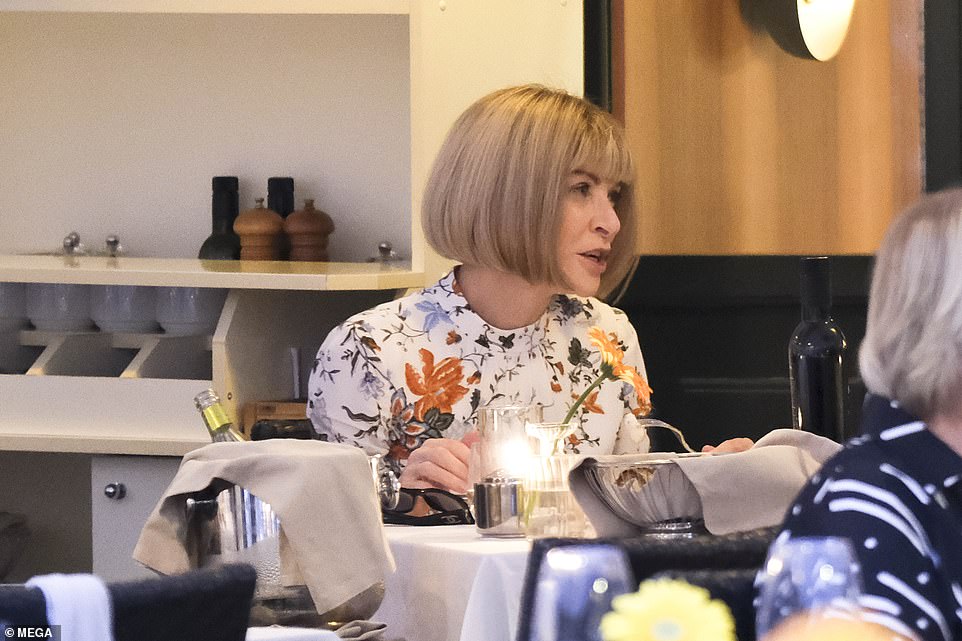 Blooming marvellous: For their evening together in the picturesque Italian city, Anna slipped into a floral white dress, complete with a high neck, which highlighted her lithe silhouette

The rumoured couple engaged in conversation over their al fresco meal and appeared very comfortable in one another’s company.

Anna and telecoms tycoon Shelby, 75, were one of America’s most powerful couples, a match seemingly made in heaven when it came to bridging the worlds of fashion, business and politics.

But 21 years after their passionate love affair made headline news on both sides of the Atlantic, it was reported by MailOnline in October 2020 that the relationship was said to be over.

There is also a question mark over whether the pair were ever actually married, with a well-placed source indicating that they never did tie the knot, and that the relationship had been over for some time.

Walk this way: She boosted her height with cream sandal heels and sported her signature bob hairstyle for their dinner 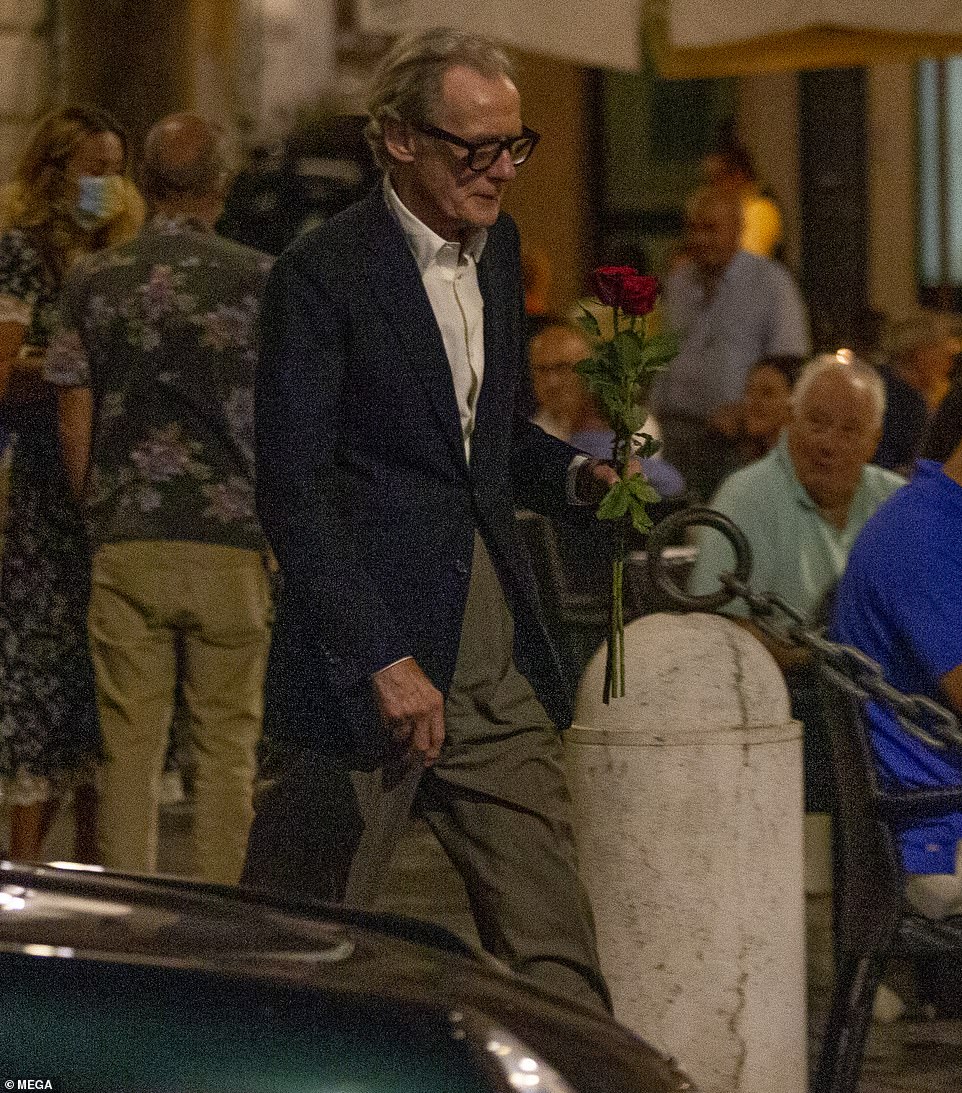 Staple style: The actor brushed his silver locks away from his visage which he framed with his signature chunky black glasses 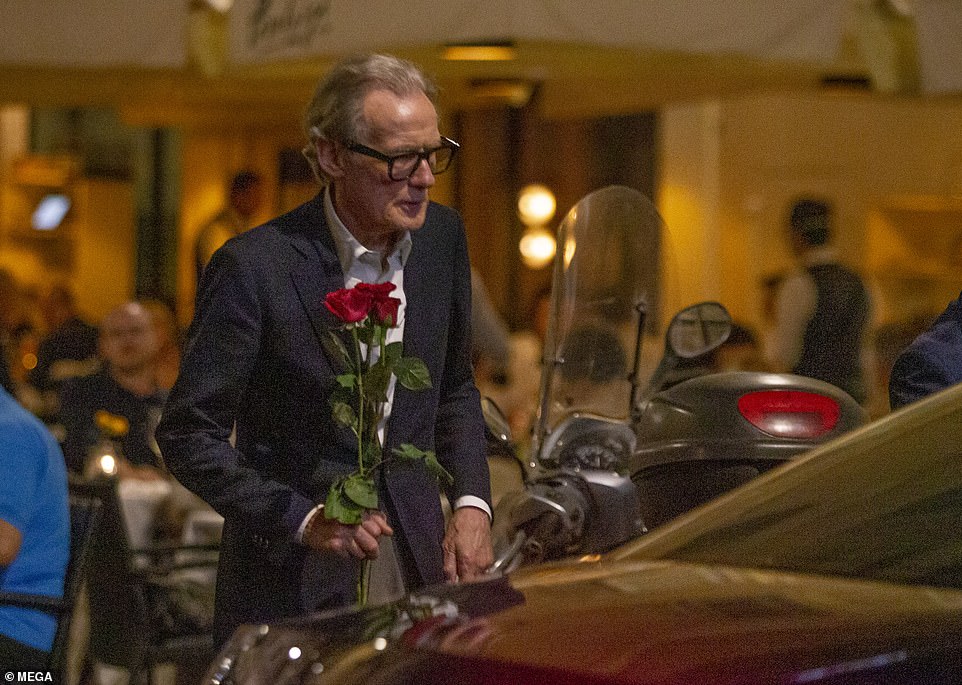 Thoughtful: He strolled past tourists and bystanders in the busy streets of Rome to gift Anna the understated bouquet

According to several reports in the US media, the pair’s romance began to cool as far back as 2013, when 74-year-old Shelby was revealed to owe £1.2 million in unpaid taxes to the IRS — the American equivalent to the Inland Revenue.

There have been rumours for a while, and denials, too, that he might have returned to former wife Katherine Bryan, whose subsequent husband, investment banker Damon Mezzacappa, died in 2015.

A source close to Katherine is said to have insisted that the pair have simply remained friends because of their children.

Meanwhile, tongues have been wagging about Anna’s relationship with actor Bill since 2010.

In January last year, the editor-in-chief was said to have been ‘beaming’ and looked ‘happier than ever’ when she and Bill were spotted eating together in New York — so happy, in fact, she even momentarily took off her trademark sunglasses. 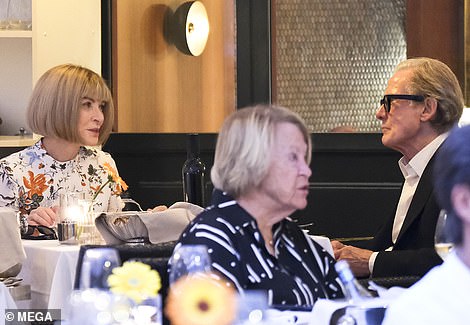 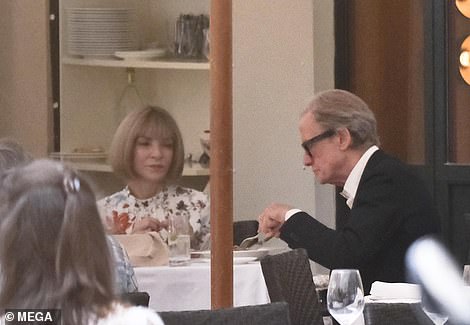 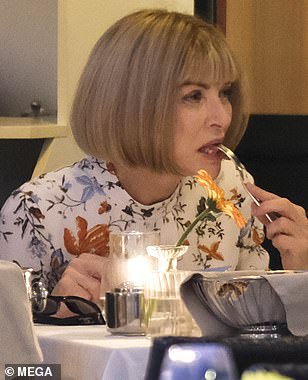 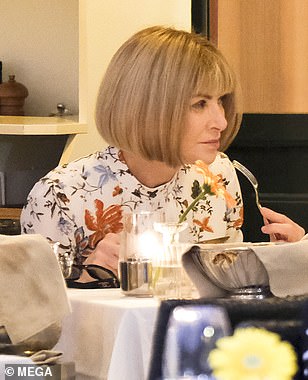 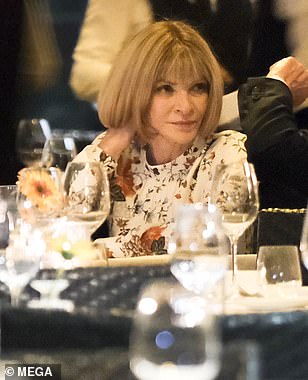 Delectable: Anna delicately ate her meal while their alcohol of choice remained cool in a bucket next to the table

Bill has always declined to comment on whether their friendship is love, actually.

In 2015, when asked about it, he replied: ‘Obviously I have nothing to say about that. There are a lot of rumours about me and probably about Anna Wintour.’

Certainly, it has been a while since Anna — who has two grown-up children, Charles, 36, and Bee, 33 with her first husband, South African child psychiatrist Dr David Shaffer — has been seen with Shelby.

One of the last times they were photographed together as a couple was back in 2018 at the U.S. Open tennis championships. 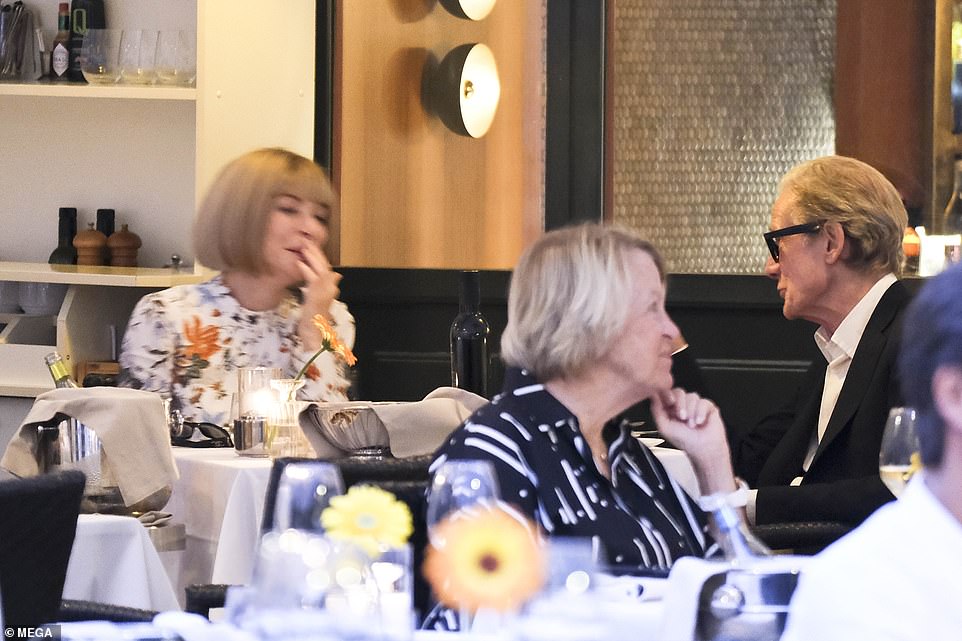 Thoroughly entertained: She covered her mouth to laugh at a comment made by the veteran actor 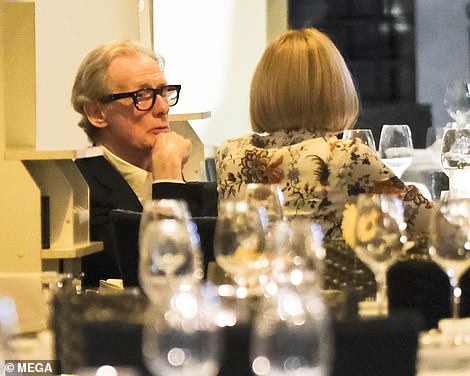 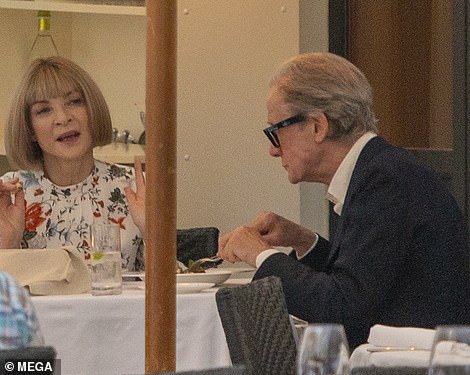 Engaged: Meanwhile Bill rested his hand as he listened intently to Anna 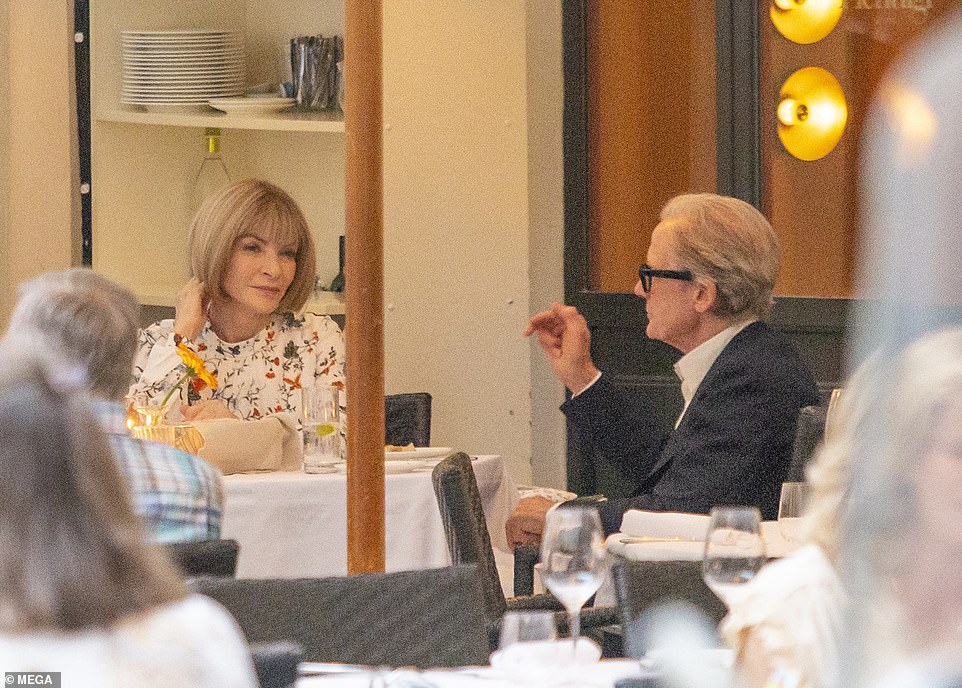 On that occasion, the sulky looking couple appeared barely able to look at each other, and one picture taken showed Anna leaning away from him — their body language frosty.

The image marked a stark contrast to previous years, when Anna was openly affectionate towards Shelby.

The couple kept their relationship largely private, although behind closed doors they were said to have bonded well with each other’s children and maintained good relations with their ex-spouses.

Is it possible, of course, that the relationship has simply run its course and that lockdown has only served to hasten its demise.

But whatever the truth, the break-up comes in the midst of what has been something of an annus horribilis for Anna. 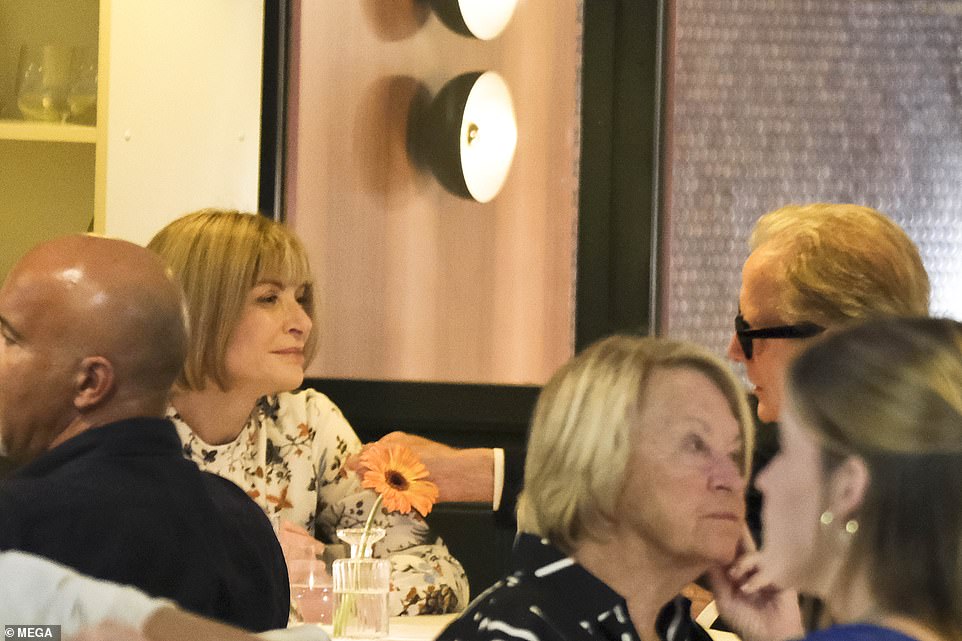 Swirling: Rumours have been circulating about Anna and Bill since 2015 as the pair have been spotted together at numerous fashion shows, theatres and restaurants in London and New York City 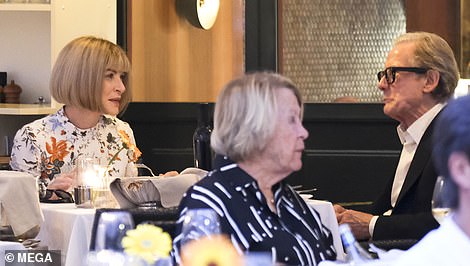 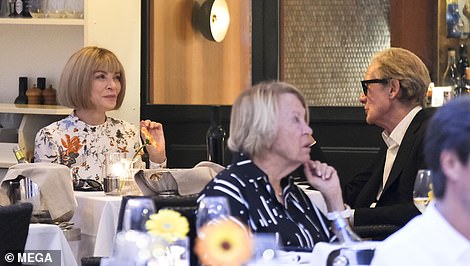 Dine out: The couple frequently attend luxurious eateries together and are no strangers to Michelin-starred restaurants 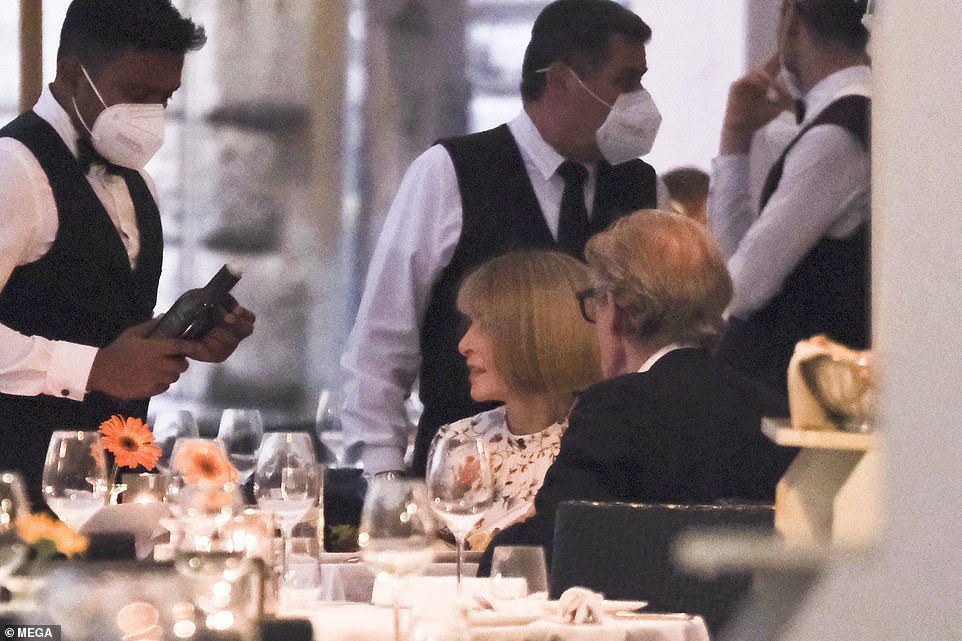 Finishing touches: A waiter came over to the table to present the alleged couple with balsamic vinegar, a staple dressing used in Italian food

Her former colleague and confidant André Leon Talley turned on her last May in his controversial memoir The Chiffon Trenches.

He accused her of using people, and claimed she had frozen him out because he was ‘too old, too overweight, too uncool’ for her.

He went on to claim that there was an ‘endless’ list of writers, stylists and models whom she had cast onto a ‘tattered heap during her powerful rule’. He added: ‘She is immune to anyone other than the powerful and the famous who populate… Vogue.

‘She has mercilessly made her best friends people who are the highest in their chosen fields.’ 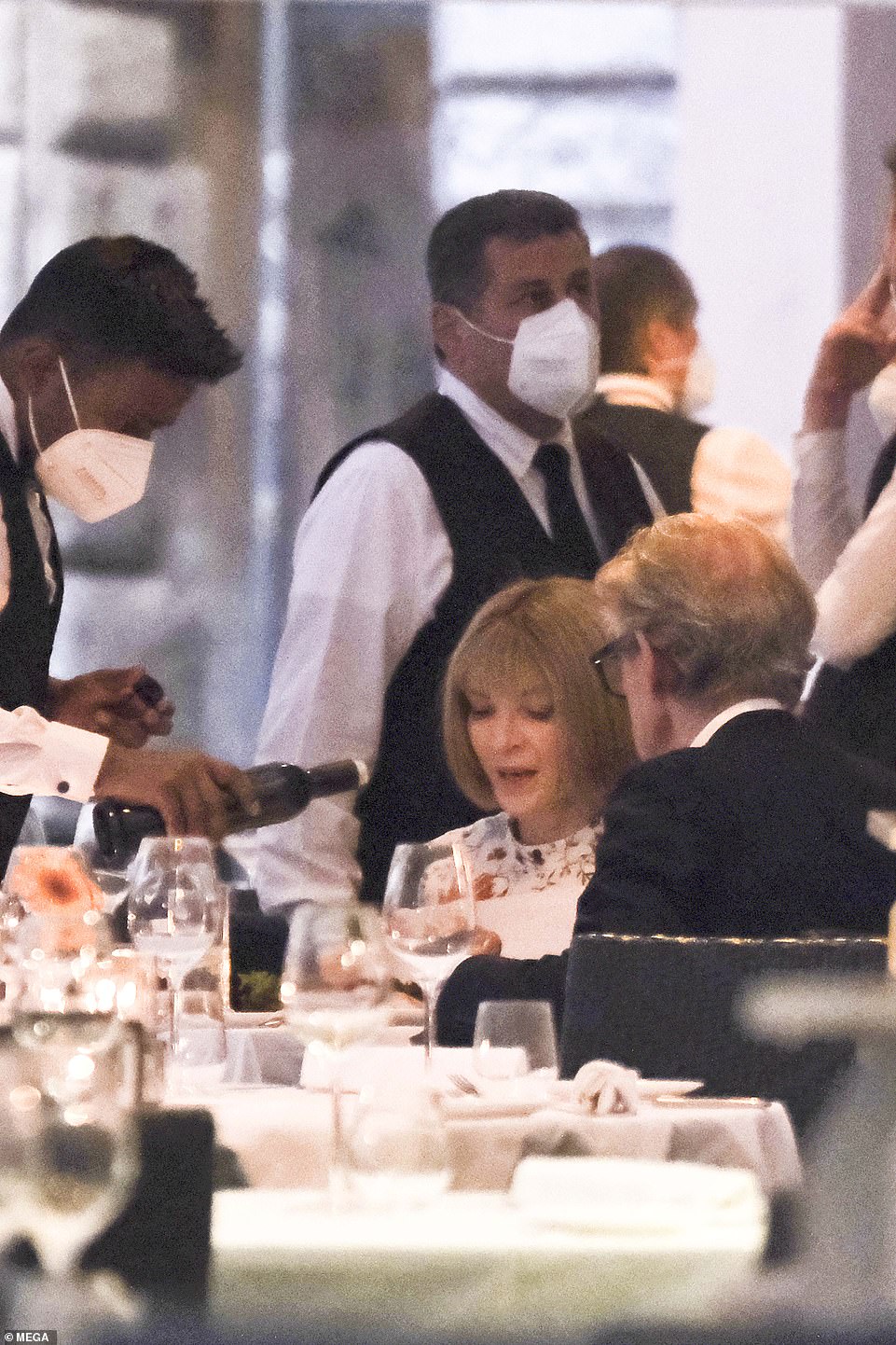 Delicious: He drizzled the sauce of Anna’s food as she continued talking to Bill 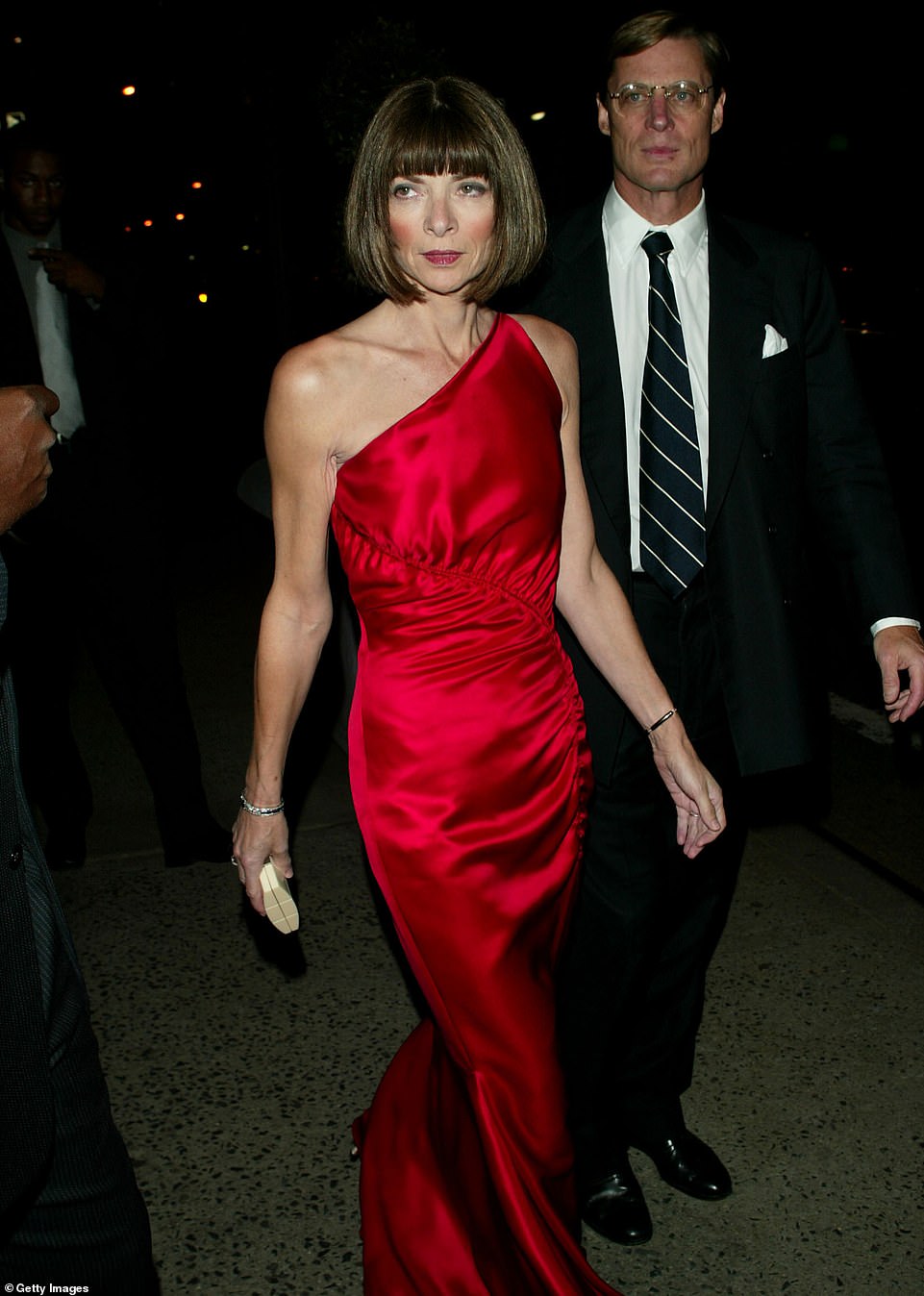 Power couple: It was reported by MailOnline in October 2020 that the relationship between Anna and the telecoms tycoon Shelby, 75, was said to be over (pictured in 2002)