There’s been a lot of drama surrounding Bravo star Hannah Berner, ever since she appeared on the latest season of the network’s hit show “Summer House.” Fans watched as Hannah engaged in feuds with not only her ex-love interest Luke Gulbranson, but also former best friend Amanda Batula and her fiancé Kyle Cooke, per ScreenRant. Other cast members began questioning the New York native’s authenticity and she even lost a paid podcast sponsor after not believing Luke’s mental health issues, according to the outlet.

In May, days after the show’s controversial reunion episode aired, Hannah announced that she was leaving “Summer House” on Instagram. She wrote, “This past year has been one of the most important in my life for self reflection, love, and learning a lot of sh*t.” She added, ” … with mixed emotions I’m announcing I won’t be spending it living in the summer house.”

Along with her role on “Summer House,” Hannah landed a job as host of Bravo’s “Chat Room” where she, along with Gizelle Bryant and Porsha Williams from the “Real Housewives” franchise, would discuss the network’s reality shows. Yet Hannah’s time on “Chat Room” also came with some drama, with former co-host Kate Chastain throwing shade at the podcaster when announcing her own departure, calling the show a “miserable enough experience” (via Us Weekly). She added, “After ‘Summer House’ went through its season, I think Hannah’s character was revealed more.” As for Hannah, she recently addressed her own role on Bravo’s “Chat Room.” 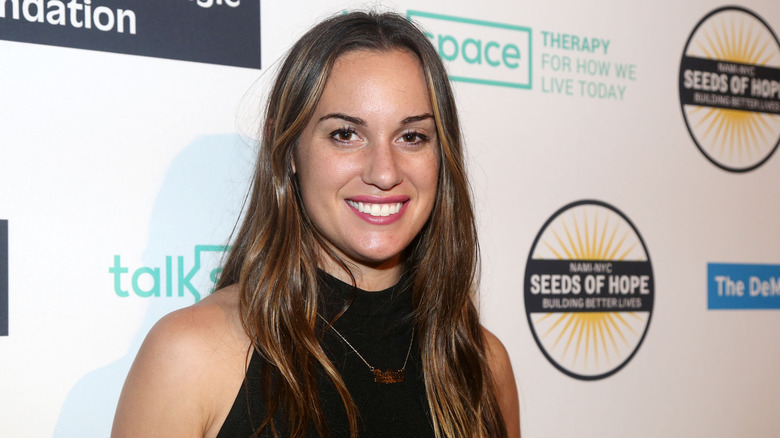 Hannah Berner has announced that she won’t be returning as a host of “Bravo’s Chat Room.” The former “Summer House” star took to her Instagram story to make the announcement, explaining, “Because I’m not going back to ‘Summer House,’ it didn’t make sense for me to return, as this is now a chapter in my life that is coming to a close.” Hannah added, “It was a dream to have the opportunity to be on the first all-female talk show on Bravo.”

Hannah’s announcement comes after rumors that she was axed from “Bravo’s Chat Room,” after her former co-host Porsha Williams left her name out while promoting the latest season. Per Page Six, Porsha said on her own Instagram story, “Me and Gizelle on Bravo August 16, five nights a week.”

As for Hannah, she’s on the road this summer on a comedy stand-up tour, which she announced in the same Instagram post as her “Summer House” departure. “Making people laugh is what brings me joy and I am so excited to announce that I will spending this summer touring my standup and telling fart jokes at comedy clubs and theaters near you,” she wrote. She will also be planning her wedding to fiancé Des Bishop, recently telling People, “We want to get married sooner than later. He’s my best friend. Why wait?” Though Hannah may be cutting ties with Bravo, she still has a lot to look forward to.

What Is Katie Thurston’s Real Job? The ‘Bachelor’ Fan-Fave Keeps It Real