Heather Mills, 53, is ‘ENGAGED to her toyboy boyfriend Mike Dickman, 36’… 13 years after her bitter divorce from Paul McCartney

The businesswoman, 53, is said to have exchanged commitment rings with the film producer, 36, just before Christmas after 18 months of dating.

According to The Sun, Heather’s boyfriend Mike views the exchange of commitment rings as an ‘informal engagement’ and the pair are in no hurry to get married.

A source told the publication: ‘Heather and Mike are incredibly happy. It’s so good to see a smile on her face again after a turbulent few years.

‘They’re completely in love. Heather has told pals he’s the love of her life whilst, for his part, Mike adores her and is completely devoted. 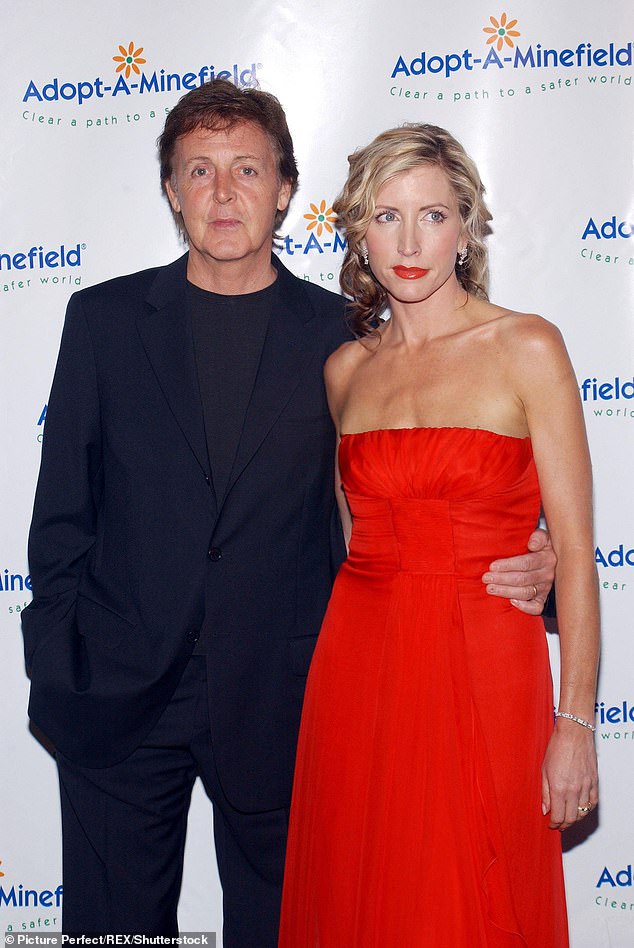 ‘Heather’s incredibly young at heart, and gets on with all his mates — their 17-year age gap really isn’t an issue.’

The Sun also reports Mike showed off a ring worn on his wedding ring finger on social media earlier this week. 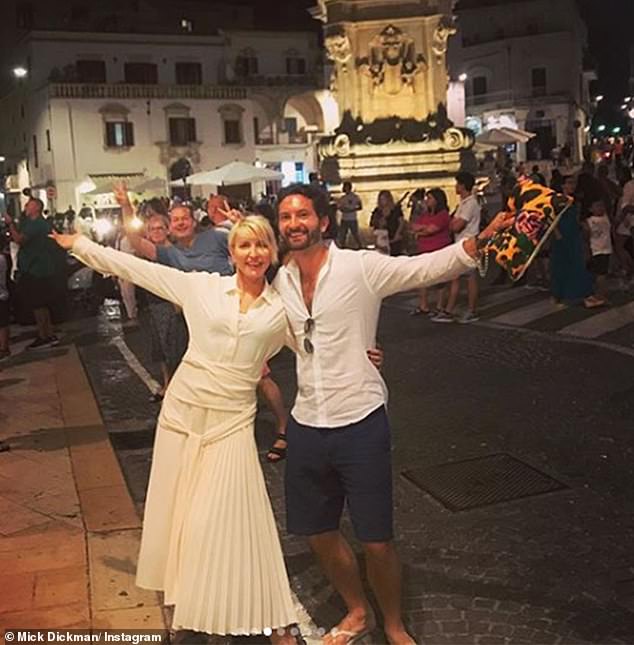 Congratulations! The businesswoman, 53, is said to have exchanged commitment rings with the film producer, 36, just before Christmas after 18 months of dating (pictured June 2019)

The couple’s love story began when the former model began sending him flirty messages on a train journey between Kent and London.

The Mail On Sunday reported at the time Heather slipped the film producer her business card and also a note saying: ‘I think you’re hot. Email me.’

A source said: ‘Mike was sitting on his own having had a long, boozy lunch and Heather was sitting next to him playing a card game with her daughter Beatrice.

‘Heather kept eyeing him up and just before the journey ended at London Bridge, she passed him a series of notes when her daughter wasn’t looking. One said, “I think you’re hot. Email me.’ 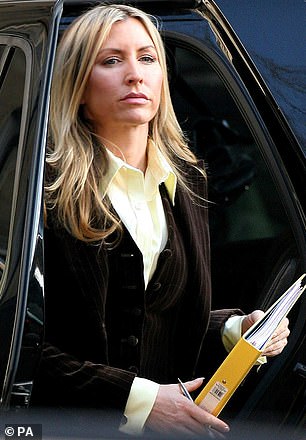 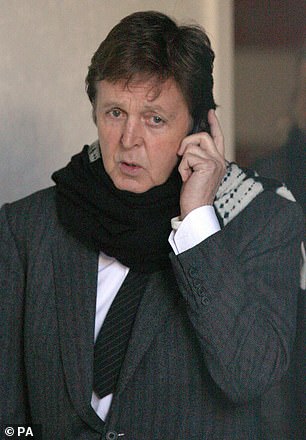 Divorce: After her split from Macca, Heather sought a £125 million settlement. But a High Court judge awarded her just a fifth of that sum – £24.3 million (pictured at court in 2008)

Heather split from Beatles legend Paul in 2006, after four years of marriage and they share daughter Beatrice Milly McCartney, now 17.

After her split from Macca, Heather sought a £125 million settlement.

But a High Court judge awarded her just a fifth of that sum – £24.3 million which she said she was ‘very, very pleased with’.

She was also awarded payments of £35,000 per annum, for a nanny and school costs for their daughter Beatrice.

Mr Justice Bennett labelled her a ‘less than impressive witness’ who had exaggerated the extent of her wealth before she met the former Beatle.

In the wake of the split, Heather was accused of being a ‘gold digger’ who only married Sir Paul for his money – which she staunchly denied, saying in a 2010 Daily Mail interview: ‘this is so far removed from who I really am.’

Five years later she told the Daily Mail how the bitter divorce affected her.

‘I felt I lost everything. I spent my whole life raising money for charities and I was asked to leave every charity [from PETA to Adopt a Minefield] because I became poison,’ she said.

‘That was who I was – when I met Paul the money I earned from doing talks all went to charity, I was offered a job with Larry King in America but couldn’t take it. Everything I had been was taken away.’

Despite being awarded millions, Helen said she gave ’80 per cent’ of her settlement away.

Heather, who lost her left leg in an accident with a police motorcycle in 1993, said: ‘I haven’t stopped doing work with land mines in war zones, except now I pay for my own mine sweepers, I take in prosthetic limbs, I pay for things myself. 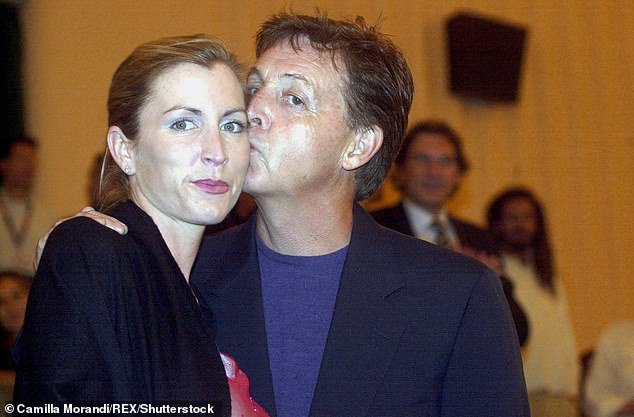 Not to be: Paul and Heather share daughter Beatrice, 17 (pictured in 2001)

‘I’m not interested in money. I fly easyJet, Ryanair, British Airways – always economy. I do my own hair and make-up, I buy clothes from Topshop and H&M.

‘My life is pretty simple. I have my restaurant VBites [a vegan restaurant in Brighton – Mills is a committed vegan], I do a lot of skiing and when I’m skiing I live out of a campervan.

‘I don’t have security, I don’t live a celebrity lifestyle.

‘I’m not interested. When I was married to Paul we toured the world after I had Beatrice. I hated it.

‘I went on private planes and then I went through the restaurant of a hotel up to a private suite which I couldn’t leave because of all the fans. I just wanted a simple life with my daughter.’

Heather has been married twice: first to businessman Alfie Karmal in 1989 (they divorced two years later).

Her marriage to McCartney – whom she met in 1999 and married in 2002 – lasted four years before they separated and then finally divorced in 2008.

Following her divorce, Heather went on to date holiday rep Jamie Walker, 46, and splashed out some of her settlement on a holiday to Sir Richard Branson’s exclusive resort on the Caribbean island of Necker. 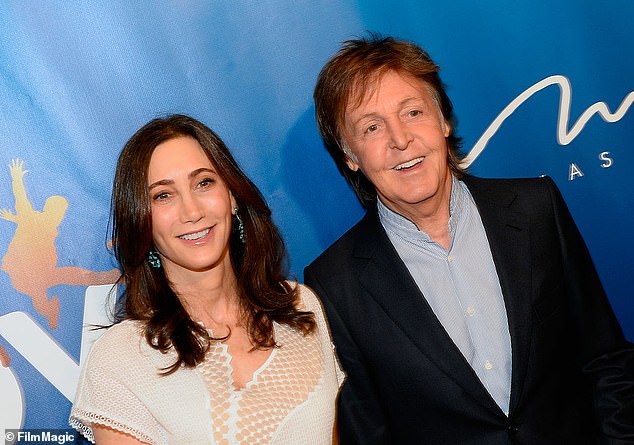