Wardrobe malfunctions; they happen to the best of us — even supermodels. This was admirably demonstrated by Heidi Klum in a video clip taken while shooting “America’s Got Talent.” In the video, Klum bends over to take a picture with her fellow judges, and accidentally flashes the camera with a shot of her bare behind. In the grand scheme of skirt-in-public mishaps, this is slightly below having the wind blow your dress over your head while walking outside, but it’s still embarrassing. Klum, however, handled the “oops” moment like a champ.

The video was originally posted to TikTok, showing Klum, Sofia Vergara, and Howie Mandel taking a selfie on set. The TikTok is accompanied by text, reading, “When Heidi Klum had so much fun at AGT. Watch at the end,” while the song “Beggin” by Maneskin plays in the background. The mishap happened when Klum got up from her seat for a moment to take a quick snap.

Klum didn’t seem too bothered by it, though. Keep scrolling to learn her funny advice following her “AGT” wardrobe malfunction.

Heidi Klum had a sense of humor about her wardrobe malfunction 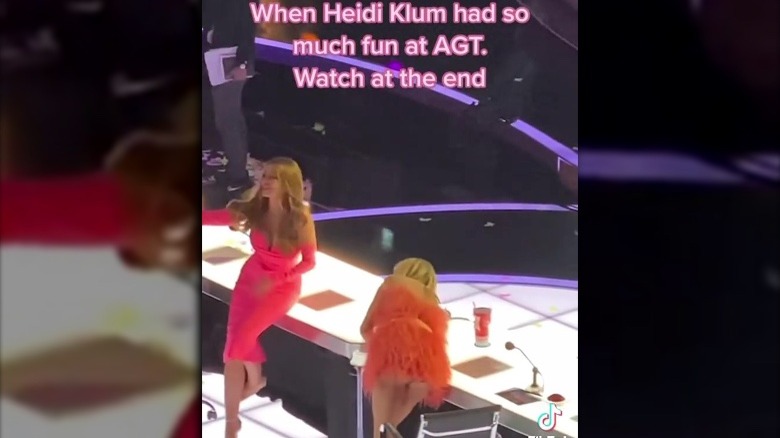 Rather than getting embarrassed by the cheeky video posted to TikTok, Heidi Klum reposted it herself to her own Instagram. In the caption, she even offered a little lighthearted advice. “Note to self ….. don’t bend over in a short skirt,” she wrote, accompanied by a couple of crying-laughing emojis.

It looks like the “America’s Got Talent” host disabled the comments on this post (which we understand, as the internet can be, well, the internet). However, fans had quite the reaction under the original TikTok video. “I see London I see France I see Heidi’s underpants,” one fan wrote with nervous emojis. Under claimed that Heidi is their “favorite” after seeing the video. If you ask us, we love a queen who can laugh at herself.

As for the short skirt in question, the pink and feathery little number is from Reve Riche, according to Page Six. And judging by the photo Howie Mandel posted from the evening to his own ‘Gram, we can confirm that Klum looks great and it was still a solid choice of wardrobe.