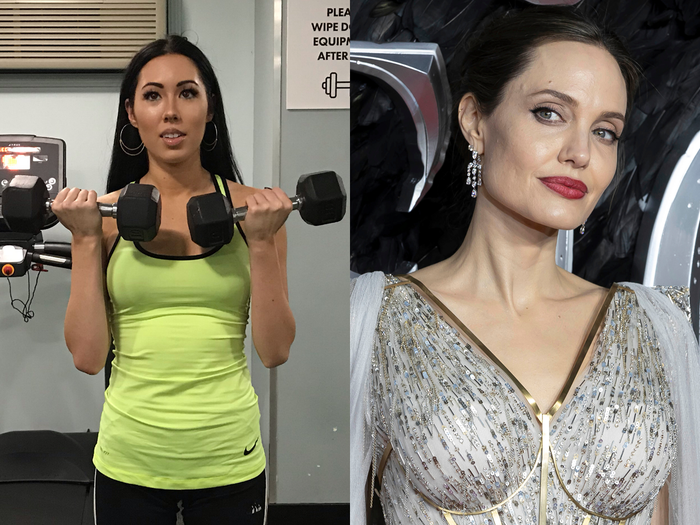 Day one: I start the week off by targeting my legs, back, and arms. 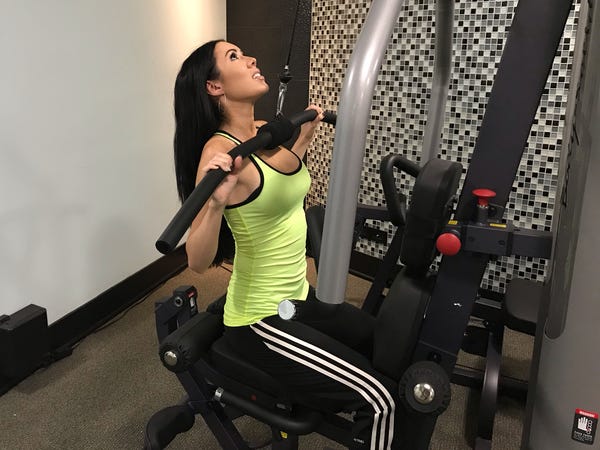 To start the week off, I follow Jolie’s routine that her trainer Gunnar Peterson shared with Pop Workouts and do 15 reps of wide dumbbell squats, forward lunges, side lunges with a twist, and the squat and press with the 5- to 10- pound dumbbells that the actress apparently uses for most of her workouts.

I have a pretty strong lower body, so I breeze through a few sets of these easily as well as the 12 leg curls on the stability ball.

However, I quickly realize I underestimated Jolie’s upper-body strength when it comes time to do the arms and back portion of the workout.

Although I’m holding 5-pound dumbbells, my arms are shaking as I do 10 cable-lat pulldowns, dumbbell rows, dumbbell bicep curls, and close-grip bicep curls.

It’s a welcome relief to give my arms a break by switching to the ab side of things with 15 crunches, 15 reverse crunches, and then 30 seconds of high knees.

As Peterson told Pop Workouts, Jolie somehow does two to three circuits of all of these moves, but my chest starts hurting when I attempt the third set of the cable-lat pulldowns so I stop.

I lay down on the mat to give myself a break before grudgingly getting on the treadmill for 30 minutes of high-intensity interval training.

I only last on the treadmill for 10 minutes, so I follow it with 10 minutes on the stationary bike. I’m way more exhausted than I expected.

Day 2: My whole body is on fire while I attempt to work on my shoulder, chest, and abdominal muscles. 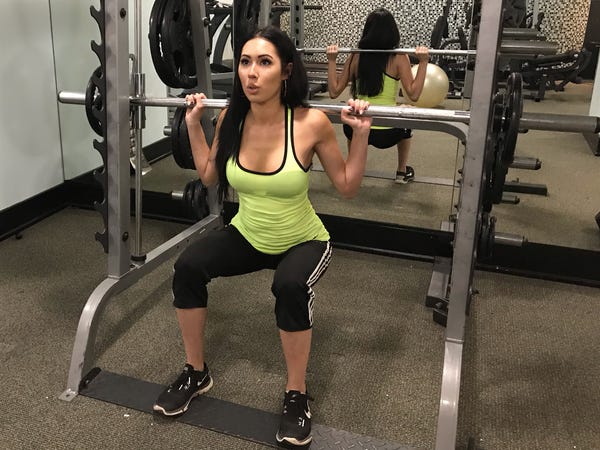 I wake up feeling pretty sore but I’m feeling pretty confident that the second day will be better than the first. I quickly learn that I am very wrong.

Looking through Peterson’s workout plan for Pop Workouts, I realize that there are some moves that I’ve never attempted, like dumbbell flys, medicine-ball push-ups, and lateral dumbbell raises.

I struggle to do three of each of these and I can’t do 10 of each like Jolie supposedly does.

The dumbbell chest press, overhead shoulder press, dumbbell curls, triceps extensions are also a struggle to get through, and I have to admit that I’m lucky if I complete five out of the 10 that I’m supposed to do for each.

It’s a struggle holding a plank for even one minute and my whole body is soaked in sweat and trembling just 20 seconds in.

I’m seriously questioning how I am supposed to do three reps of these.

I lay on my mat and rest for 20 minutes before finally getting myself up to attempt the second set. It’s just as brutal as I expected and, again, I’m barely able to make it through half as many reps as Jolie does.

I’m supposed to close out my workout with at least 30 minutes of cardio, but I decide to cut it short and try to bring more intensity to the aerobic portion of the workout tomorrow.

Day 3: I'm actually looking forward to dedicating one day to yoga (which Jolie has said she's not a fan of) and cardio. 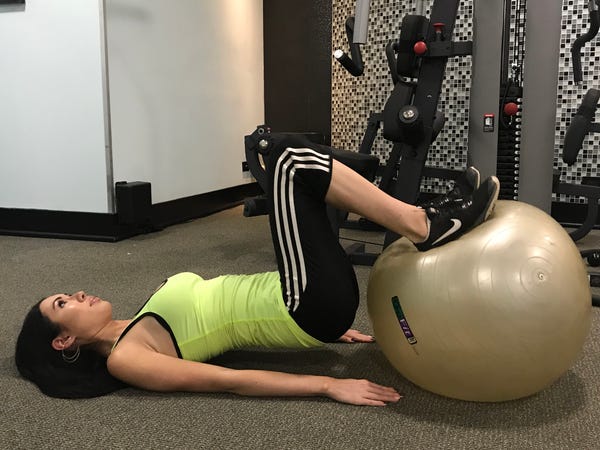 I never thought I’d say this, but I’m actually looking forward to skipping the weights and starting off my day with 20 minutes of yoga.

Literally everything hurts at this point including muscles that I didn’t even know I had, and I’m looking forward to stretching things out.

Fortunately, Jolie can relate to my slight dislike of yoga — in a 2014 interview with USA Today, she said that she’d had to grudgingly start doing it to practice for her role in Disney’s “Maleficent.”

“It’s not something I do easily because I’m not a still person,” she told the publication. “But I was forced to do yoga because [to fly] you have to have your core strength to be able to hold yourself.”

Just like the actress, I’m not a “still person,” so it’s pretty tough for me to shut down my brain and focus on breathing while performing the yoga moves.

Once my abs are on fire from the warm-up, I put away my mat and get ready to throw myself into 45 minutes of cardio.

Since I can’t imagine running on a treadmill for 45 minutes, I take Peterson’s advice and decide to try three different cardio machines for 15 minutes each. In this case, I divide my time between the treadmill, elliptical, and stationary bike.

I’m actually not as bored as I expected, and I’m able to power through with the help of a good playlist.

The workout feels pretty refreshing after the last couple of days, and I’m hoping I feel more recovered before the workout tomorrow.

Day 4: I'm back to doing the day-one workout, and it is a little easier than it was last time. 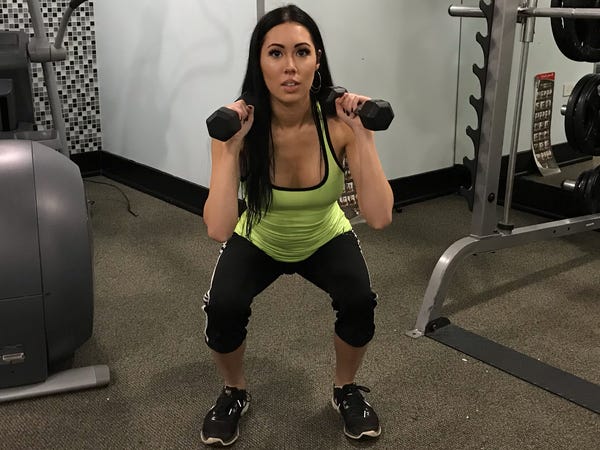 Now that I know just how hard this week is going to be, I have no complaints about repeating the first day’s workout. Instead, I’m already mentally bracing myself for how hard tomorrow is going to be.

Again, I grab 10-pound dumbbells as I power through 15 reps of wide dumbbell squats, forward lunges, side lunges with a twist, and the squat and press, ending with the 12 leg curls on the stability ball.

Since I’m not looking forward to the rest of the workout, I put on a good playlist and do two more sets of these. I’m feeling pretty accomplished at this point.

After taking a quick break, I grab two 5-pound weights (for a total of 10 pounds) as I do 10 the dumbbell rows, dumbbell bicep curls, and close-grip bicep curls, followed by the cable-lat pulldowns.

To be honest, it’s really not as bad as I remember the second time around, although I run on the treadmill for 15 minutes in between to give my burning arms a break.

Two sets later, I finish off with 15 crunches and reverse crunches followed by 30 seconds of high knees.

Again, I’m really tempted to skip the cardio portion of the workout (definitely sensing a pattern here), but I compromise by going on the stationary bike for 10 minutes and putting the resistance levels up.

I feel tired but satisfied after my workout.

Day 5: The shoulder, chest, and abdominal moves are just as tough as I remembered. 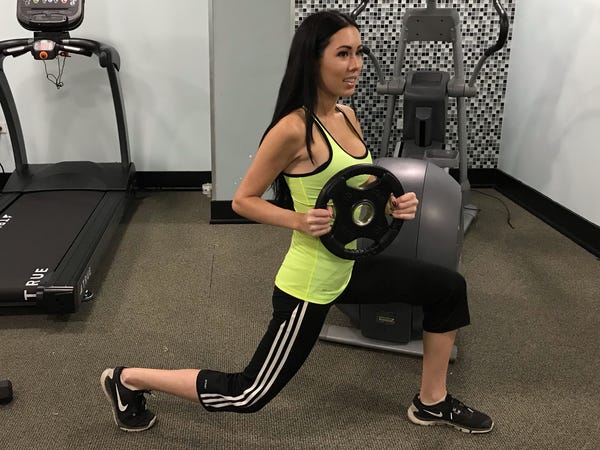 On day five, I wake up and lay in bed dreading this workout.

There’s almost nothing more frustrating than realizing that you don’t physically have the strength to do a certain workout, so I’m not feeling very confident as I head through the gym.

Already, I know which exercises are my personal weaknesses (the medicine-ball push-ups, the lateral dumbbell raises, and overhead shoulder press) so I try to not be so hard on myself when I can only do two of them.

I get through only a few reps of the dumbbell flys, the dumbbell chest press, dumbbell curls, and triceps extensions, trying to focus more on form and performing them correctly than on how many I can do.

Again, I finish off the routine with the ab-focused part of the workout and a 60-second plank.

Muscles that I didn’t know existed under my armpits and on my back are on fire and my arms are visibly trembling at this point, but I feel a little less defeated than I did earlier this week.

Day 6: I try my first-ever boxing class and quickly realize it's one of the hardest full-body workouts I've ever attempted. 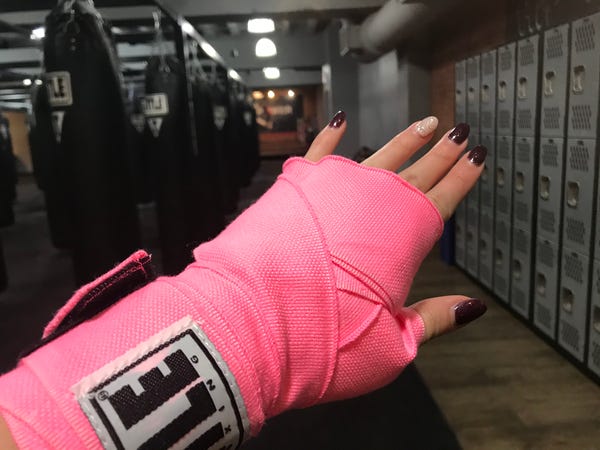 Since Jolie is so well-known for her action-based film roles, I knew working out like her for a week wouldn’t be complete without some kind of combat training.

To prepare for some of her movie roles, Jolie supposedly learned a combination of Muay Thai (a type of combat sport) and Krav Maga (a military-style fighting system) and practiced them for hours a few times per week.

I’m not quite ready for either of those, so I try something more accessible, yet still combat-related: a boxing class.

Before I start, the trainer teaches me a couple of the different punches as well as the correct stance, showing me how I’ll be working my core and my legs by twisting with each hook.

I find out that attendees can burn a total of 800 calories during the hour-long class, which features a mix of high-intensity interval training, punching, and ab and core workouts.

I’m a little intimidated when I see how intensely some of my classmates are warming up, but I try to calm my nerves and do some light stretching before we start.

I quickly realize that not only does boxing take physical strength, but also it takes some mental acumen to remember the different combinations and how to move your whole body correctly with each punch.

I struggle during some of the high-intensity interval sections, such as the dreaded push-ups with the medicine ball, but I feel exhausted at the end of the class in a good way and my whole body is completely burning.

I also didn’t realize what a great stress reliever it would be to punch a bag, and I’m feeling pretty badass with my boxing gloves on.

Day 7: I already feel like I'm getting the hang of everything. 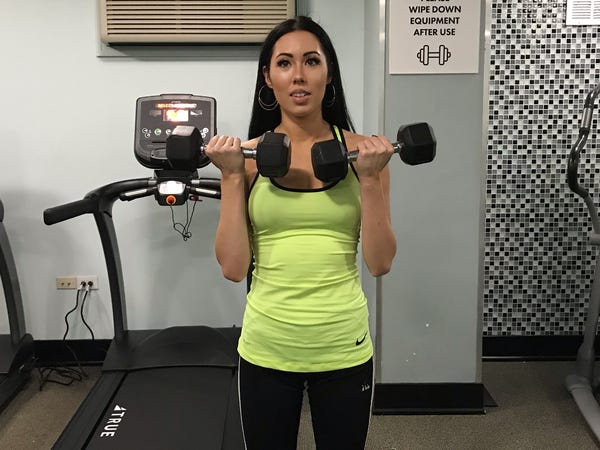 I’m feeling sore but excited to have another day of boxing.

Although I was timid with my punches at first, I realize that I’m starting to feel a lot more confident and am not overthinking the routines as much as before.

Instead, I try to focus more on the correct form, and I feel my legs and butt burning as I go from the boxing rounds to exercises I’m familiar with, like jump squats, jumping jacks, and side lunges with a twist.

I’m surprised at how quickly an hour goes by and just how much of a full-body workout I got in.

Again, there’s also just something about wearing the gloves that makes me feel strong and like I can do anything, and I have to admit I’m pretty hooked on this kind of workout.

Ultimately, I'm definitely going to use some of Jolie's moves in my future workout routines. 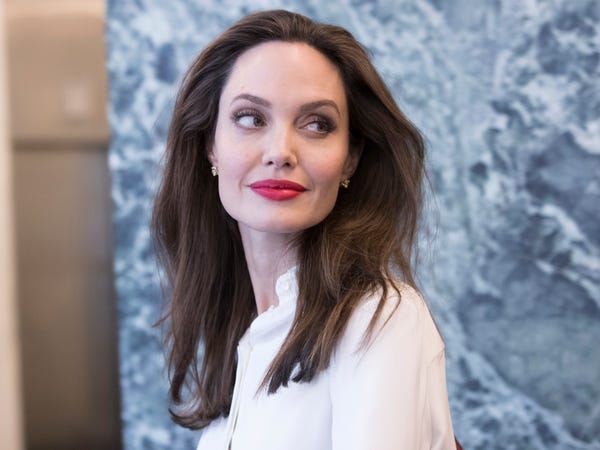 Overall, Jolie’s workout left me feeling empowered and strong — and I definitely plan to incorporate some of Jolie’s moves into my daily routine.

Combat training is something that I’ve never considered before, but I was surprised how much of a workout I got while building upper body strength and getting cardio in at the same time.

I was surprised by how quickly the boxing class flew by — and how toned and strong my upper body felt after just a few days.

In the past, boxing intimidated me because of its reputation as a male-dominated workout but I was inspired to see other women in my class killing it and putting their all into the class, just like I was.

Plus, there was something about adding a combat section to my routine that felt empowering on its own.

Of course, I still had my fair share of struggles with Jolie’s routine, but it was one of my favorite celebrity workout routines I’ve done thus far because it felt like it was challenging but also sustainable.