If the secret of good comedy is timing, our watches must have stopped! Co-creator of I’m Sorry I Haven’t A Clue shares its most gloriously groan-worthy gags

Anyone who told us in 1972 that I’m Sorry I Haven’t A Clue would one day be voted the funniest radio series of all time, beating greats such as Just A Minute, Hancock’s Half Hour and Farming Today, would have been roundly jeered.

Back then, we didn’t expect to last another week. I dreamed up the format as a vehicle for ad libs and improvisations — because, after ten years of helping to write a radio series called I’m Sorry I’ll Read That Again, I suddenly realised we might not need a script at all. That ought to save some trouble, I thought.

We kept the same cast: me and my fellow Goodies, Tim Brooke-Taylor and Bill Oddie, plus John Cleese. The jazz musician Humphrey Lyttelton was invited to chair proceedings, since he was a genius at improvisation on the trumpet and we didn’t see how comedy could be any different.

John didn’t enjoy the chaos of it, though, and nor did Bill, so both left — but the addition of Barry Cryer, a veteran of the stand-up circuit even then, and later the sublimely daft Willie Rushton, helped to rescue us.

Colin Sell joined us at the piano, yet gradually we became cult listening, with an ever-changing roster of different rounds. We called it ‘the antidote to panel games’ but it proved to be infectious and, 48 years later, we’re still here. 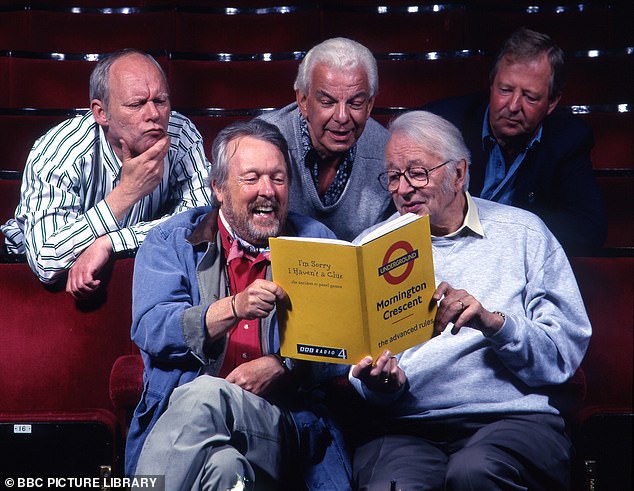 I’m Sorry I Haven’t A Clue has been voted the funniest radio series of all time after a rip-roaring 48 years. Clockwise from top left: Graeme Garden, Barry Cryer, Tim Brooke-Taylor, Humphrey Lyttelton and Willie Rushton

The Uxbridge English Dictionary round was added to the show about 20 years ago, when Jeremy Hardy came up with the first alternative definition: Dictator: a humorously shaped root vegetable.

Monogamy: Celebrating New Year in Scotland by yourself.

Hello and welcome to another edition of I’m Sorry I Haven’t A Clue — the show where games and laughter go together like boiled beef and parrots. This week we can promise you a nail-biting contest… followed by a nose-picking contest…

Hello and welcome to the show with jokes to suit all ages, from the late Neolithic to the early Bronze.

Hello and welcome once again to the programme that’s been compared to the Irish stunt man who tried to jump 15 motorbikes in a double-decker bus. Well, if the secret of good comedy is timing, here’s four players whose watches must have stopped . ..

Condominium: A birth control device made from metal.

Telepathy: When you can’t be bothered to turn over the TV.

Perversion: The cat’s side of the story.

Eyeliner: A big ship made by Apple.

Gelatine: A device for cutting the heads off jelly babies.

The Sound Charades round — work out the title of this film, acted out by our resident Scottish curmudgeons:

GRAEME: Hamish! You’ll have had your tea.

B: Indeed I have. But tell me now, what’s that peeping out of your sporran?

B: You’d tell your grandchildren about a thing like this. I’ve never seen a Ning before. Get it out and give us a proper look.

G: Well, your Ning isn’t much of a one for company.

B: You mean he’s easily embarrassed?

G: Oh very, very. Keeps himself to himself, you know. Look! Look, you can see him going a funny colour.

B: Oh I see. You mean he’s not comfortable with strangers?

(And the answer is… The Shining) 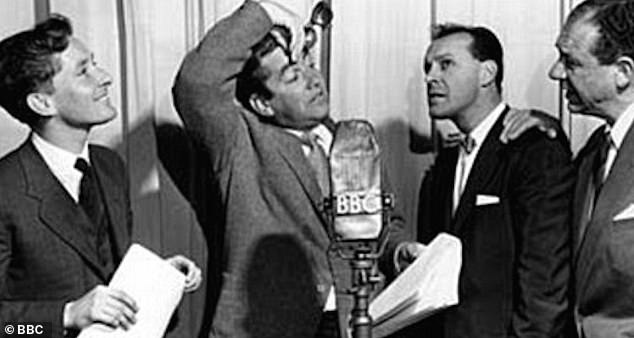 The radio series saw off competition from greats such as Just A Minute, Hancock’s Half Hour (pictured) and Farming Today

The most popular member of the cast is our imaginary assistant Samantha, who keeps the scores while chalking up a few of her own. She used to get Humph quite hot and bothered:

And what builders mean:

And what estate agents mean:

Going around the desk, players take it in turns to add lines to a limerick:

Ben Kingsley, while dressed up as Gandhi,

Went in to a bar for a shandy.

To wipe up the froth, He used his loin cloth

A weakness of Vlad the Impaler

Was to shout out at men: ‘Hello, Sailor!’

In far Transylvania, He’d indulge in his mania,

And dress up as Elizabeth Taylor.

While playing a game of bezique

I was jumped on by Zorba the Greek.

He grabbed my bouzouki, Cried: ‘How’s this for nookie?’

And I couldn’t sit down for a week.

Every radio show has its fans, and our most devoted listener is a Mrs Trellis of North Wales. Last Christmas she sent us a card with this cheery little rhyme:

‘Did you see the little robin,

With his red breast plump and perky?

He flew in my kitchen window

And got roasted with the turkey.’

We often end the show with a round of late arrivals at grand events. Arriving at the Astronomer’s Ball:

WYWH: Will you want Horlicks?

MYOB: Make your own Bovril.

OAP: On a promise.

TBC: To be cremated.

Mr and Mrs Azer, and their nudist daughter, Stark Azer, sometimes known as the Great Bare

From Ireland, Mr and Mrs O’Centauri, and their son, Alf

From Wales, Mr and Mrs Leebody, and their son, Evan

At the BBC Ball:

Mr and Mrs Questions, and their daughter, Annie

Mr and Mrs Clocknews, and their daughter, Nina

At the Nudists’ Ball:

Mr and Mrs Gleebits and their son, Dan

Mr and Mrs Talia and their daughter, Jenny

Mr and Mrs Jarse and their son, Hugh

Well, a quick glance at the time tells me that it’s fast coming up to eighty-one hundred hours, which means, of course, that I’ve put my digital watch on upside-down again…

Ladies and gentlemen, one glance at my diver’s watch tells me that he’s probably drowned…

Well, all good things must come to an end, and so must this programme…

And a final thought from Chairman Humph: As we journey through life, discarding baggage along the way, we should keep an iron grip, to the very end, on the capacity for silliness. It preserves the soul from desiccation.