Before his life was “saved” by new girlfriend Olivia Munn and the baby they have on the way, the Saturday Night Live alum was supposedly happily married. His estranged wife Anna Marie Tendler certainly seemed to think so, as her only official statement on the divorce announcement expressed how “heartbroken” she was he had ended the marriage.

Her devastation — apparently expressed through her latest artwork — is all the more understandable as he consistently said he never wanted kids while they were married. Ouch.

Obviously it’s no surprise a great many have taken her side and chosen not to celebrate Mulaney’s impending new family. But some members of Team Anna Marie have actually gone a step further and started poking holes in the story the standup told on Late Night With Seth Meyers, noting it was inneresting indeed how tight a timeline he seemed to be detailing, mentioning dates and whatnot. Almost like he was trying to get hold of the narrative so no one would think he had cheated with Olivia. And of course he couldn’t have picked a more friendly venue for telling his own version of the truth than with his BFF Seth Meyers.

At least one source who knew Olivia said even the story about them meeting in church was B.S. Apart from the wedding she’d mentioned becoming obsessed with him at, this Page Six insider said she hung out with the same SNL crew for years, and there was even video of them hanging out as far back as 2017. Definitely makes you think…

But here’s the thing… it wouldn’t even be the first time he was accused of cheating.

Back in May, long before the Olivia news was even out, we heard a pretty unsavory rumor courtesy of an exotic dancer working out of NYC.

It had actually come out months beforehand, even before the rehab stint, only as a blind item. A woman wrote into the Instagram gossip account DeuxMoi describing a comedian/late night comedy show writer who came to her strip club and frequently paid for sex with the dancers. While the blind never revealed who the comic was, many believed it to be about Mulaney because of how perfectly it fit.

“I was so excited when I was told he was coming in the first time, I thought just to get lap dances but he slept with one of the dancers and my boss told me he sleeps with dancers whenever he’s around.” 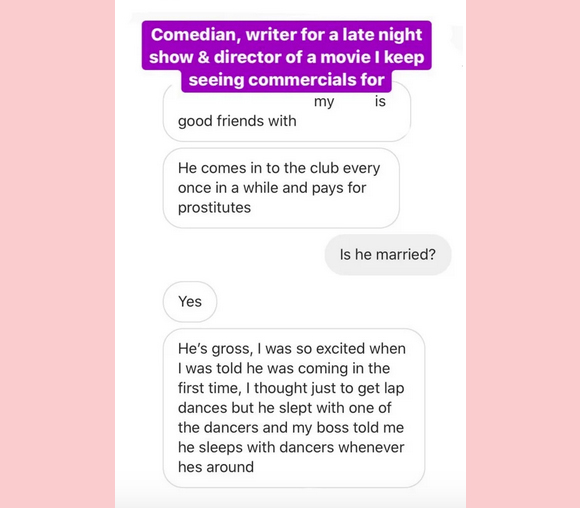 The “director of a movie” part didn’t match up, but Mulaney had posted on his IG that he had directed pal Pete Davidson‘s film The King Of Staten Island. It’s possible the poster saw that (now deleted) post and didn’t realize he was kidding.

All that is just speculation, right? This was a blind item after all.

But in May a woman claiming to be a dancer from NYC specifically commented directly on a Reddit thread about the couple’s divorce, claiming they had personally slept with the Broadway vet. She wrote:

“I worked at a strip club in Manhattan for several years and met and hooked up with Mulaney on more than one occasion. He went by ‘Jack’. I’ve got no proof but I had to comment when I saw this thread lol”

The anonymous commenter made it clear this was not a #MeToo situation and that he was very nice. Just, you know, also married as hell at the time:

“He’s actually really cool and normal. Took me a while to even realize it was him bc he wasn’t acting like ‘somebody’ and kind of just blended in with the friends he was with. It was a rly high end club so we didn’t have to deal with many sleazy ppl and he’s one of the coolest ppl I met. Wicked sarcastic but rly friendly too. Exactly what you’d think he’d be like.”

She claims he didn’t advertise the fact he was married as he openly cheated — oh yeah, and was off the wagon even then:

“That being said, he was definitely drinking and definitely never mentioned a wife. Did not hesitate to give me his number to meet outside of the club. He was always respectful to me so I could never call him a predator or anything, but I felt so awful once I found out he was married.”

After her comment was quoted in a Page Six article, the poster claimed she had actually been vetted by the outlet first:

“Someone DMed me to make sure I had his real phone number before this came out so I guess they decided I’m legit.”

Obviously we can’t verify any of that. But it’s an awful lot of smoke, huh?

And a source close to Anna Marie did tell Page Six his then-wife “knew he was doing things with other women before he went to rehab in December.” Oof.

So… did Mulaney cheat with Olivia Munn before officially leaving his wife? Was his new savior the impetus for his divorce??

These are the questions that have been trending around social media. While outsiders may never know the entire story, it certainly has everyone examining their own views on relationship morality.

Chrissy Teigen SAVAGELY Claps Back At Critic Accusing Her Of Photoshopping Her Butt!