Jennifer Hudson hits all the right notes as the mighty Queen of Soul, from survivor to diva: KATE MUIR reviews Respect

Her voice is uncannily like Franklin’s and deepens the film with every powerful, emotional note.

While Hudson brings an electric presence to the screen as she belts out (You Make Me Feel Like) A Natural Woman in a white silk dress with marabou feathers, the surrounding narrative in this long film often feels stiff and unconvincing. 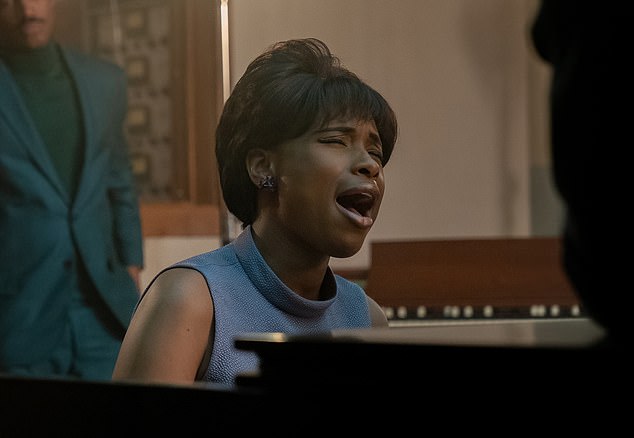 Still, Franklin’s rise from childhood gospel singer in her father’s church in Detroit to international diva is a story of extraordinary resilience, alongside extraordinary events. The title song, Respect, is both a cry for help and a statement of intent.

Franklin was born in 1942 and grew up amid the Black Civil Rights Movement. She sang at Martin Luther King Jr’s funeral — one of the many overwhelming moments in a film where music speaks more effectively than words.

Franklin’s pastor father Clarence, played by Forest Whitaker, is a disturbingly ambiguous figure. One minute he is warm; the next, icily controlling of his daughter and cutting record deals in her name.

In the Fifties, after Franklin’s mother had died, her father took his young daughter on his ‘gospel caravan’ tours to sing in churches. Somehow she got pregnant at the age of 12, and again at 14. The two children were raised mostly by their grandmother.

The sexual abuse is well-known but almost unmentioned in the film, even as this trauma plays out in Franklin’s addiction and suffering in later life. As with so many musical biopics, the rights to the songs come with a carefully sanitised version of the truth.

Watching Franklin emerge as a musician on her own terms, shaking off her controlling father and equally controlling (and violent) husband Ted White (Marlon Wayans), is uplifting.

There is a moment when Franklin arrives at the famous Muscle Shoals recording studio in Alabama, and suddenly brings the musicians together in a creative crescendo.

‘Follow me!’ she says, and you can see the beginnings of her reign as the Queen of Soul. 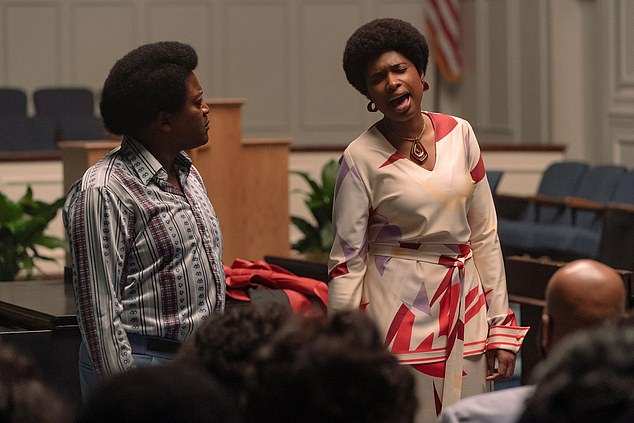 Franklin’s rise from childhood gospel singer in her father’s church in Detroit to international diva is a story of extraordinary resilience, alongside extraordinary events

There are other joys to Respect alongside the music — no expense has been spared on the costumes, and everything looks box-fresh.

Also, sit tight for the finale, when the real Aretha appears.

Herself puts Grand Designs firmly in its place, as Clare Dunne plays Sandra, a working mother escaping from a violent marriage — by building her own house.

This is no vanity project but a move born of desperation, as Sandra is forced to live in one room at an airport hotel with her two young daughters for more than a year. She is 652nd on the housing list in Dublin, with little hope of change.

The drama, directed by Mamma Mia’s Phyllida Lloyd, is ultimately uplifting in every sense, as a crew of friends raise the roof beams on the tiny wooden house and Sandra finds the strength to rebuild her life.

But the story begins with a brutal scene of domestic violence, as Sandra’s husband Gary (Ian Lloyd Anderson) smashes her face and crushes her hand, and her terrified children run outside.

The incident leaves Sandra with PTSD and a brace on her hand, as she works as a cleaner for Peggy (a crisp but empathetic Harriet Walter), a retired doctor recovering from a hip operation.

Sandra googles ‘self-build Ireland cheap’ and discovers that for 35,000 euros she can build what is basically a well-insulated shed.

Peggy offers a loan and some land at the end of her garden and, somewhat unconvincingly, the community pulls together with unlikely speed to start building.

Dunne gives a superb performance, especially when she has to hand over her children to their father each weekend, and the kids are great: really natural performances from Molly McCann and Ruby Rose O’Hara. 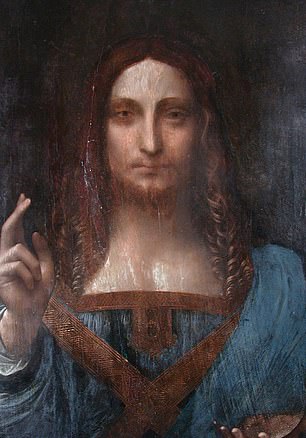 This fascinating documentary follows the remarkable story of a painting of Christ known as the Salvator Mundi (in Latin, saviour of the world), which in 2017 sold at auction in New York for almost half a billion dollars

This fascinating documentary follows the remarkable story of a painting of Christ known as the Salvator Mundi (in Latin, saviour of the world), which in 2017 sold at auction in New York for almost half a billion dollars.

Eventually, it emerged that the buyer was a Saudi prince.

But the much bigger mystery, explored in detail in Andreas Koefoed’s excellent film, is whether the painting for which he paid such a staggering sum is by the hand of Leonardo da Vinci or was merely created in his workshop. Whether this is his own work remains the $450 million question.

The story begins with a so-called ‘sleeper hunter’, the name given to sharp-eyed men and women who scour the world for misattributed works of art. One, Alexander Parish, spotted the Salvator Mundi in New Orleans in 2005 and bought it for a trifling $1,175.

Less than seven years later, the National Gallery included it in its Leonardo exhibition. In 2013 it was sold for $83 million.

Koefoed looks at both sides of the story, interviewing those convinced the painting is genuine and some just as certain it isn’t.

Along the way, his film tells us plenty about snobbery, greed and the murky politics of the art world. That the image at the heart of it all should be one of Christ is an irony that seems to escape everyone.

Timothee wows the girls — but will Olivia charm the judges?

By Brian Viner at the Venice Film Festival

The Power Of The Dog

While it is entirely possible that Olivia Colman will not repeat her 2018 triumph (for The Favourite) by winning the Volpi Cup for Best Actress when the 78th Venice Film festival dishes out its silverware this weekend, I truly can’t think of anyone, male or female, who has given a better performance.

In The Lost Daughter, actress Maggie Gyllenhaal’s hugely impressive directorial debut, Colman is simply superb in the lead role as Leda, a middle-aged academic from Leeds holidaying alone on a Greek island.

It is an adaptation of Elena Ferrante’s novel of the same name, which I confess I haven’t read. But I will, in the hope that it’s as good as the film.

Leda is enjoying the tranquillity when it is shattered by an obstreperous family of Greek-Americans, one of whom (Dakota Johnson) loses her young child on the beach.

It is Leda who finds her. But the episode triggers traumatic memories of her own life as a young mother and, bit by bit, we learn that Leda has brought a whole trunk of emotional baggage to her Greek idyll.

A top-notch supporting cast also features Jessie Buckley as the younger Leda, Ed Harris and the director’s husband Peter Sarsgaard. It opens in the UK in January.

I also greatly admired The Power Of The Dog, Jane Campion’s powerful drama set in Montana in 1925, in which Benedict Cumberbatch excels as a wealthy but dysfunctional rancher who seems to loathe everyone and everything, starting with himself. It is due out in November.

Of the films not in competition, I loved Edgar Wright’s Last Night In Soho (October), a riveting psychological horror film which flits between the 1960s and now, and gives us the valedictory performance of the late, great Diana Rigg.

I also really liked Old Henry (October), an old-fashioned western of the kind they don’t make any more — except evidently they do. Tim Blake Nelson is splendid as a farmer with a shady past.

The biggest event of the festival was the world premiere of Dune (October), Denis Villeneuve’s eagerly-awaited sci-fi epic starring Timothee Chalamet (who by the way was welcomed to the Lido by a vast crowd of semi-hysterical girls, the ‘Chalamaniacs’). It’s very long and very loud but also, happily, very good.

Anyone who remembers the 1970s will more than likely be whisked back there by the opening titles and theme tune of Copshop (★★✩✩✩, 15, 108 mins), so retro I half-expected to see a wisecracking Jim Rockford.

The plot might have played well in the 1970s, too. A scam artist (Frank Grillo) gets himself arrested by hitting a female cop (Alexis Louder) —but only because he thinks the hitman (Gerard Butler, pictured right) chasing him won’t be able to get at him if he’s behind bars in a police station. Wrong. Butler’s character pretends to be a drunk driver and gets himself banged up as well. From there the story lurches along pretty implausibly, with occasional deviations into a corrupt-cop narrative that was another 1970s standard.

While it’s not a terrible film, it’s decidedly forgettable.

The Collini Case (★★★✩✩, 15, 123 mins) is more interesting: a German-language legal drama adapted from a bestselling novel by former lawyer Ferdinand von Schirach (whose grandfather, by the way, ran the Hitler Youth movement), which was in turn inspired by a true story.

The Collini of the title is an elderly Italian (Franco Nero) who, after decades of living quietly and irreproachably near Frankfurt, one day murders a rich industrialist by shooting him three times in the head. A newly qualified young lawyer accepts the challenge of defending the murderer, even though he knew the victim — indeed, was practically an adopted grandson. It becomes his job to find out what made Collini carry out this inexplicably brutal killing.

Page Six: Duchess Meghan plans to have a home birth & a maternity leave