Kim Kardashian is never one to shy away from a glam red carpet moment and is known for her head-turning ensembles. The “Keeping Up With the Kardashians” star has made many appearances at the Met Gala over the years and is no stranger to making headlines for her show-stopping fashion choices.

According to The Sun, Kim had everyone talking on social media after she wore a tight “wet dress” to the 2019 event. The theme for the year was “Camp: Notes on Fashion,” something the business mogul nailed. The attire was designed by Thierry Mugler, whose vision was to have Kim look like she had just stepped out of the ocean. As reported by W magazine, the garment took eight months to complete. “He envisioned me as this California girl stepping out of the ocean, wet, dripping,” Kim explained to Vogue at the gala.

Due to the coronavirus pandemic, the Met Gala did not take place in 2020. With that being said, the charity event went ahead this year, meaning Kim knew she had to step up her game. As always, she had everyone talking about her choice of fashion. This time, she made a bigger statement than ever before. Keep reading to find out more. 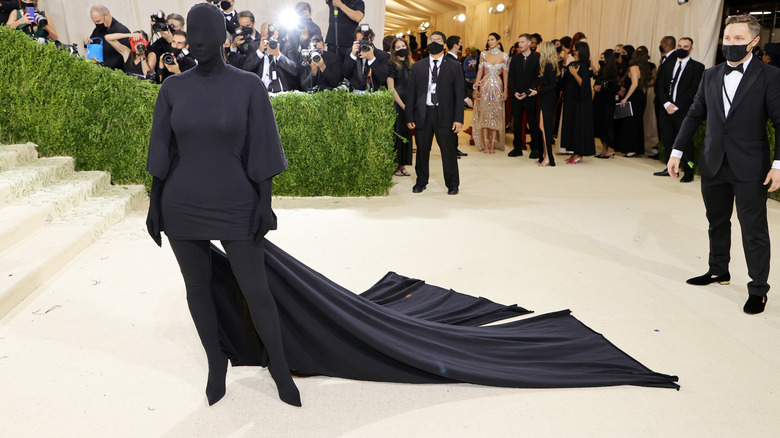 For this year’s Met Gala event, Kim Kardashian turned up in an all-black ensemble. The makeup guru not only had her whole entire body covered, but also her face. According to TMZ, Kim was styled by designer Balenciaga and was inspired by her estranged husband, rapper Kanye West. The head-turning look consisted of a T-shirt under a T-shirt dress with an incorporated bodysuit. Kim teamed the ensemble with boots and had a long train that fell behind her.

Unsurprisingly, she created a lot of buzz on social media and became a trending topic after many compared her look to various different things. “Very niche of Kim Kardashian to go as my sleep paralysis demon,” one user wrote. “#KimKardashian wore a trash bag and called it fashion,” another person shared. “Kim K showing up in my Sims backyard after I took the ladder out of the pool,” a third user tweeted. “Not at Kim Kardashian looking exactly like shadow criminal-kun from Detective Conan,” a fourth fan joked.

As noted by TMZ, this was not the first time Kim was seen in public this past week wearing attire that covered her whole entire face and body. While in New York, she rocked a head-to-toe black leather getup.