Love is in the air at the American Music Awards! Megan Fox & MGK hooked up in quarantine, but now they’re out together for the first time at a huge Hollywood event!

It’s a big night for the couple! Megan Fox, 34, was announced as a late addition presenter for the American Music Awards early on Sunday, Nov 22nd, hours before the big show. Machine Gun Kelly, 30, was already set to take to the stage and make his AMAs debut with a big performance. So, why not make the evening extra special and show up together! 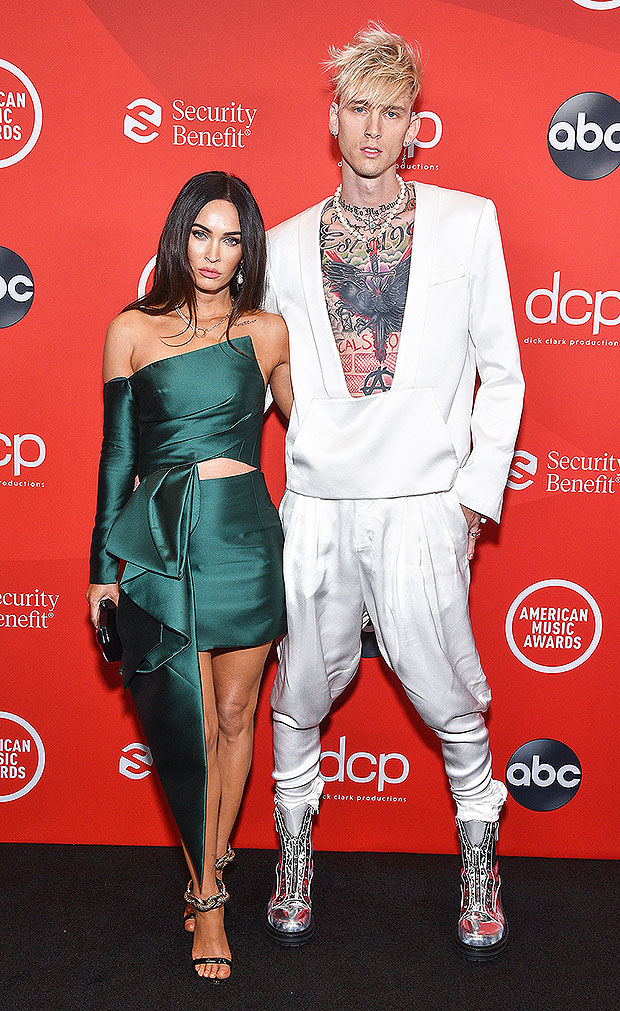 Megan rocked a dark green, strapless asymmetrical gown, which featured one long sleeve and a ruffled, skirt overlay on one side of her body. The dress featured a cut out, exposing her midsection, and was complete with a figure-hugging mini skirt underneath. The raven-haired beauty accessorized with a simple silver necklace, a black clutch, and black stiletto pumps complete with chain detailing around her ankles. Her new beau looked equally polished in a white suit jacket featuring a large pocket design around his midsection and matching, baggy white pants. He also rocked a pearl necklace and red and silver combat boots. Talk about a stylish duo!

The show marks the couple’s first awards show and first major appearance together since they began dating this summer. Megan and MGK have been gushing over each other for months, having found love after a difficult time for them both. Pandemic aside, after filming the upcoming movie Midnight in the Switchgrass, Megan’s then husband Brian Austin Green confirmed in May that he had separated from her late last year after 10 years of marriage. Once that news was out, the pair were free to let their fling flourish into something more.

Something much more, in fact. Whenever interviewed, MGK and Megan gush over how much in love they are and how they’ve found true happiness with each other. However, Megan took things even further earlier this month, when she MGK a ‘once in a lifetime romance’ to Nylon.  “Loving him is like being in love with a tsunami or a forest fire,” Megan added. “The intensity of merging with him is just overwhelming, and the threat it poses is so powerful but so beautiful that you have no choice to surrender with reverence and with gratitude.”

Sounds like we’ll be seeing much more of this couple as time goes on and Hollywood opens it’s doors a bit more. Happy they’re happy.