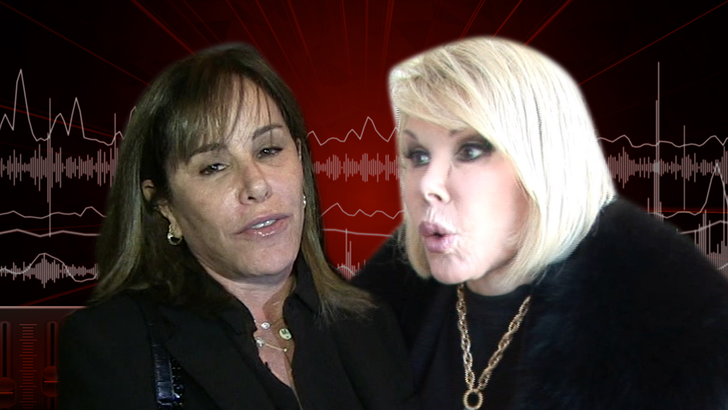 Melissa Rivers says she feels violated and hurt the folks behind “The Marvelous Mrs. Maisel” won’t cop to the fact her legendary mom is the inspiration for the Amazon Prime series.

Melissa hopped on the “Behind the Velvet Rope with David Yontef” podcast and said to this day she has not watched a single episode of the critically acclaimed comedy series because she says the show never acknowledged Joan Rivers‘ influence on the standup comedian main character.

She told Yontef … “I wish I had gotten a note saying, ‘Your mother was one of the inspirations for this and we hope you enjoy it. Here’s a t-shirt. Here’s a link to the first episode, to the pilot.’ You know?”

Fans of the series have taken note of the vast similarities between Joan and Rachel Brosnahan‘s character, Mrs. Maisel — both born in New York to Jewish parents who were skeptical of their careers in comedy. Both also attended prestigious schools … but it’s their comedic rhythm delivery coupled with being self-deprecating and vulgar that immediately drew comparisons.

Melissa says she didn’t need ‘Mrs. Maisel’ showrunners to straight-up come out and say ‘Mrs. Maisel’ is completely her late mother but at least SOMETHING. What’s more … she says she “felt so violated” because “one of the writers [on the show] and I had the same agent, you know, so my whole thing is, reach out.”

The only person, Melissa says, who acknowledged her late mother is Jane Lynch, who portrays the comedian Sophie Lennon. Melissa said the nod to her mother left her in tears … and moved her to the point of sending Jane flowers the next day.

Melissa does admit maybe the show feared a possible lawsuit if it came out and said Joan was the inspiration, but she’s adamant — all she ever wanted was a “thank you.”