Wondering how Prince William and Kate Middleton’s relationship is doing amid all this royal drama? Apparently they’re closer than ever, which, cool-cool-cool, good to know. According to a source who chatted with Us Weekly, “The Cambridges are busier than ever since Harry and Meghan left the U.K. You’d think their hectic schedule would put strain on the marriage, but it’s actually brought them closer together. Working as a team and supporting each other is essential at a time like this, and that’s exactly what they’re doing.”

The vibes were certainly cute during the royal couple’s engagement in Wales, where they had a rare PDA moment. And by that I mean Kate touched William’s arm (lol), which definitely counts as PDA for the royal family, who are typically ultra reserved in public. 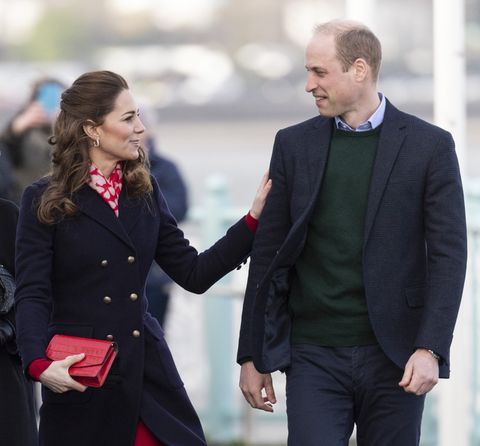 FYI that during the same outing William was overheard being low-key cute about Kate, telling a fan who complimented Princess Charlotte that “Yes, she is lovely—just like my wife.”

This is all kinds of sweet, but keep in mind that William and Kate’s increased affection comes after a bunch of speculation about their relationship a few months ago, when Kate shrugged off her husband after he touched her shoulder during a Christmas TV special.

Kate shaking off William’s hand on her shoulder during #ABerryRoyalChristmas pic.twitter.com/NyzjdKC3rk

Glad to see things are back! on! track!