After stepping away from the ‘Jersey Shore’ to face his ‘issues head on,’ Ronnie Ortiz-Magro announced that he’s quit drinking and is coming back to the show that made him a household name.

“I feel great, bro. I feel great, four months sober. I quit drinking,” Ronnie Ortiz-Magro told TMZ on Thursday. While chatting with the outlet in front of the Abra in Beverly Hills, Ronnie, 35, reflected on his recent engagement to girlfriend Saffire Matos, becoming a “full-time father” to his and ex Jenn Harley’s daughter, Ariana Sky Magro, and, after sorting out his life, he’s “living a good life.” Ronnie also had some good news for fans of The Jersey Shore. After stepping away from the show “to deal with my mental health, to be a father to my child, to be a fiancé to my woman,” Ronnie said he’s coming back.

“I’ll be back,” he said. “All the fans love me, and I love them too. So, I’m going to give them what they want, and I’ll see them soon.” Ronnie said he’s stayed in touch with the show’s producers and that he hopes to be back at the end of the fifth season. He also added that, despite any personal clashes in the past, everyone on the Shore cast will be invited to his and Saffire’s wedding. “We’re family, at the end of the day. We grew up together – twelve years strong. Family forever.”

Well – not everyone. Ronnie did say that he and Jen Harley don’t talk anymore. “I’ve moved on. She lives her life, I live my life.” When the photog brought up possibly inviting Jen to the wedding, Ronnie laughed and joked, “What do you mean? She’s going to marry us. She’s the priest!” 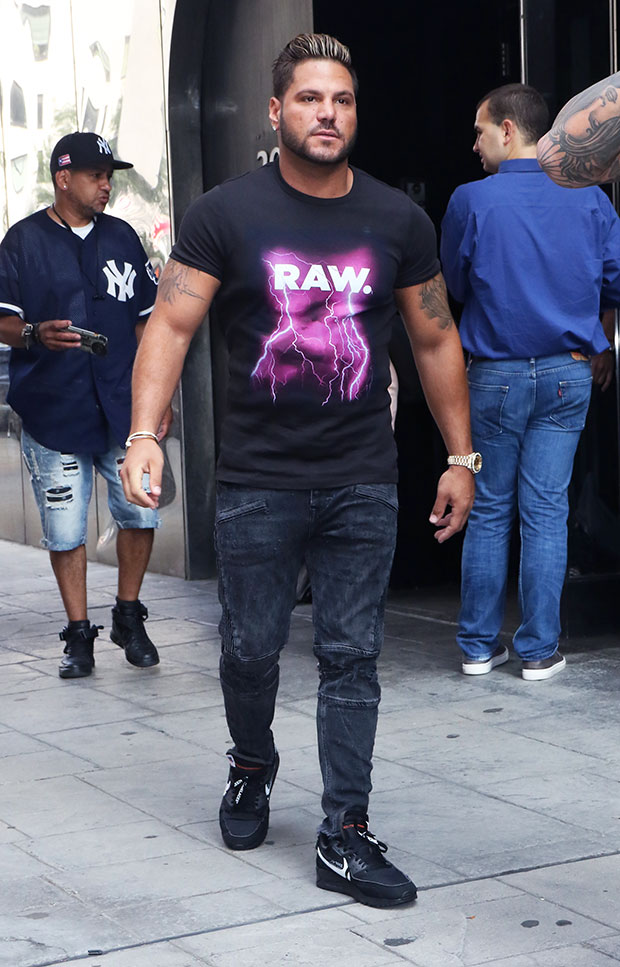 Ronnie announced in May that he was stepping back from MTV’s Jersey Shore: Family Vacation following his arrest on “suspicion of intimate partner violence” in late April. “After talking to the team at MTV, we have mutually agreed that I will step away from the show while I seek medical treatment for mental health issues that I’ve ignored for far too long,” he said in a statement. Ronnie added that his “one goal now is facing my issues head on,” and that getting healthy was his “number one priority.”

On the same day that Ronnie said he was taking a break from Jersey Shore, the domestic violence charges against him were dropped, and his lawyers issued a statement about how he was undergoing “medical treatment for psychological issues that he has ignored for a long time.”