Has the Duchess of York’s welcome back into the Firm gone to her head — or rather her feet?

Flying from London to the United Arab Emirates this week, Prince Andrew’s ex-wife boarded her Etihad Airways flight in navy loafers with eye-catching gold crowns on the front, teamed with a black skirt and blue pashmina.

The 59-year-old, en route to Dubai for a charity gala, posted the picture herself thanking the airline for giving her such royal treatment.

Fergie has been accepted back into the Windsor fold after her daughter, Princess Eugenie, wed tequila salesman Jack Brooksbank in October. 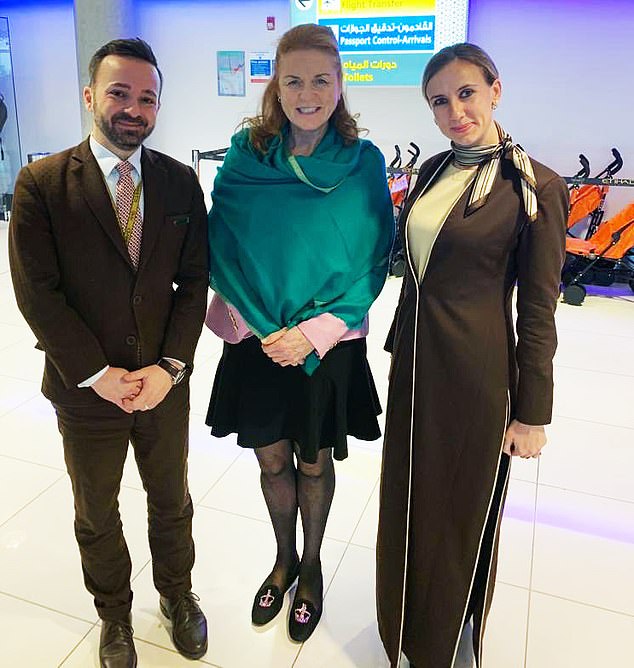 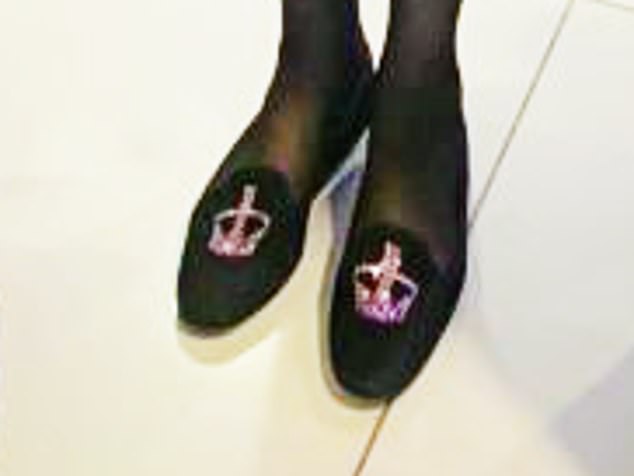 She was spotted wearing navy loafers with eye-catching gold crowns on the front, teamed with a black skirt and blue pashmina

More slimming down at Clarence House. Control of the three private companies belonging to the Duke and Duchess of Cambridge and Prince Harry has fallen to little-known staffer Clara Pearce.

Her elevation follows the departures in recent months of private secretaries for three of the young royals: Miguel Head, Rebecca Deacon and Edward Lane Fox, who were all shareholders in the companies.

The Duchess of Cambridge’s company is called CE Strathearn, while Prince William named his APL Anglesey and Harry named his company Tsessebe — after an antelope.

MAMA MIA! LILY’S IN A FLAP

Never work with children or animals goes the old showbiz adage — as Mamma Mia! star Lily James discovered this week when the denim-clad 29-year-old went to feed the wild parakeets in Kensington Gardens.

It didn’t go as smoothly as she’d hoped, judging by the alarmed look in her eyes in the picture she posted online after being ambushed by a large white cockatoo.

‘The Birds’ she captions it, alluding to Hitchcock’s famous horror film.

Seventies chart-topper Steve Harley denies he is selling out after the makers of Viagra used his hit Make Me Smile (Come Up And See Me) in their latest TV advert for the drug.

‘Male impotence was the last thing on my mind when I wrote the song,’ says the 67-year-old Cockney Rebel singer.

‘I used to wonder if I was selling out when I allowed the song to be used in the odd TV ad, but Bryan Adams put my mind at ease when he told me: ‘Hell no, man — it’s the song doing its job.’ ‘

Vicky Pattison’s moving tribute to fiance Ercan: ‘He’s the one – I want his baby’