‘My favourite interview in 4 years on GMB’: Seething Piers Morgan confronts PETA activist who wants to ban animal owners from using the word ‘pet’ and replace it with ‘companion’

Piers Morgan has hailed his ‘favourite interview in four years on Good Morning Britain’ after the seething presenter blasted a PETA activist who wanted to ban the word ‘pet’.

On today’s show he raged at the animal charity’s senior media officer Jennifer White as she suggested using the word ‘companion’ instead.

The journalist, 54, launched a tirade then tweeted afterwards: ‘This was my favourite interview in 4.5yrs on @GMB. #PETA… They’re. Literally. Called. PETa.’

His row with White was so heated that co-host Susanna Reid forced to interject as things got heated. 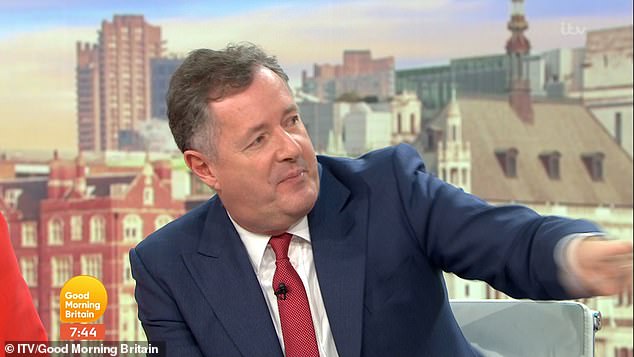 Fuming: Piers Morgan was left raging as he locked horns with a PETA’s Senior Media Officer, Jennifer White about the use of the word ‘pet’ on Good Morning Britain on Tuesday

Their exchange took a turn for the worst with the group, when Piers insisted the PETA activist should answer his question as it was ‘his show’.

Piers appeared to take particular issue with the fact that PETA has the word ‘pet’ included in its name despite the calls to end its usage.

During the argument, Piers said: ‘No you can answer my question, it’s my show!’ before Susanna said: ‘Am I not allowed to take part in this conversation?!’

Following the row, Twitter erupted with praise for the star as many insisted that White’s position was ‘ludicrous’.

As he noted the inclusion of the word Pet in PETA, as he said: ‘It’s called PETA, how am I missing the point, you want to ban word pet, but continue organisation called PETA? I am offended by your use of the word pet.’ 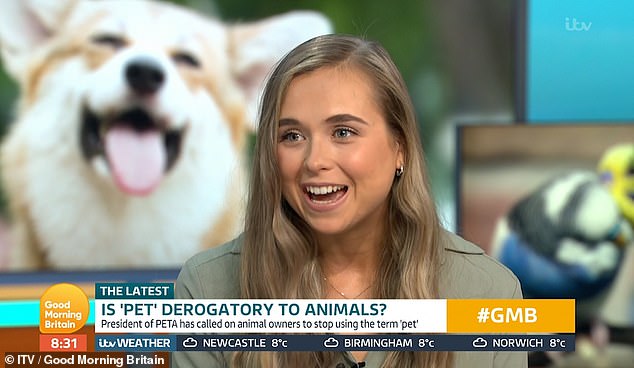 Lashing out: He was accused of not letting Jennifer speak on the show 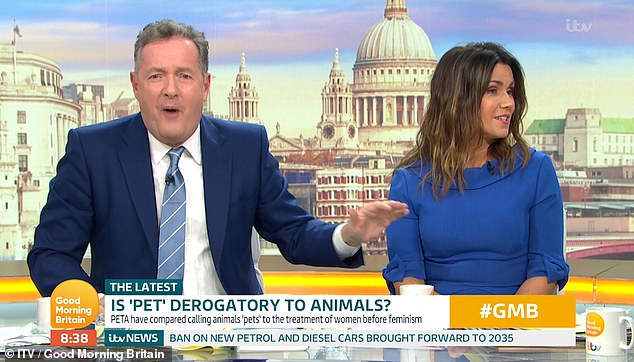 Hitting out: Susanna grumbling when she was cut off 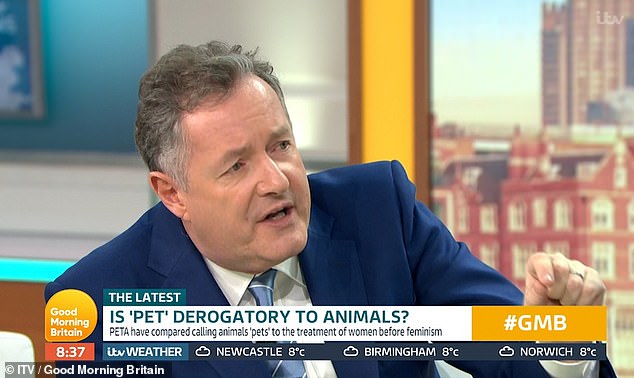 Furious: He was left raging during the seemingly losing row

Jennifer  said: ‘No we are not, we are suggesting people use the word companion’. Piers said: ‘So what are you changing the name of your organisation to?’

Hitting back while laughing, Jennifer said: ‘It’s an acronym. We’re not planning on changing it’, yet Piers was quick to hit back: ‘It’s got pet in it. It’s literally called PETA.’

Piers then insisted Jennifer’s frequent laughs were due to the fact she herself knew how ridiculous she was being and lashed out at the star. 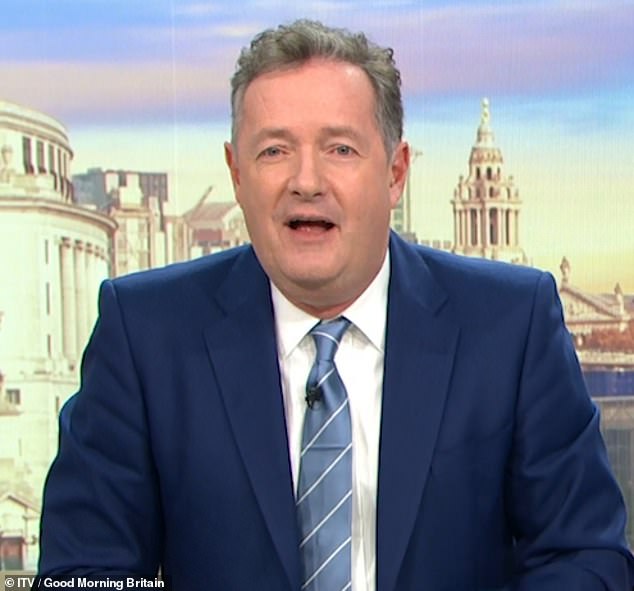 Lashing out: Piers then insisted Jennifer’s frequent laughs were due to the fact she herself knew how ridiculous she was being and lashed out at the star 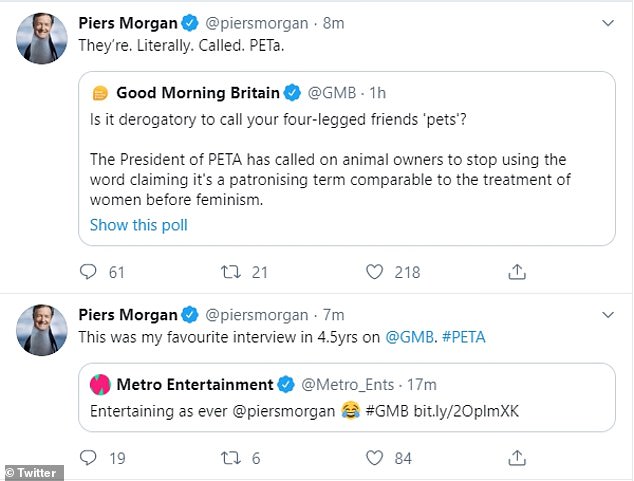 Overjoyed: Taking to Twitter after the argument, Piers celebrated the row and insisted he had thoroughly enjoyed the moment. He penned: ‘This was my favourite interview in 4.5yrs on @GMB. #PETA… They’re. Literally. Called. PETa’

Throwing their support behind Piers, fans swarmed Twitter to pen: ‘I have always hated calling my animals pets because it disregards the emotion I have for them… but its not incorrect and peta being a bit loopy… Good [email protected]…

‘If PETA cared about pets they wouldn’t kill thousands of adoptable dogs and cats every year… So nothing to do with ‘PET’… Wow, this is your argument?…

‘I mean I think having pets that are cared for and loved is totally fine. But your argument here is juvenile and embarrassing.’ 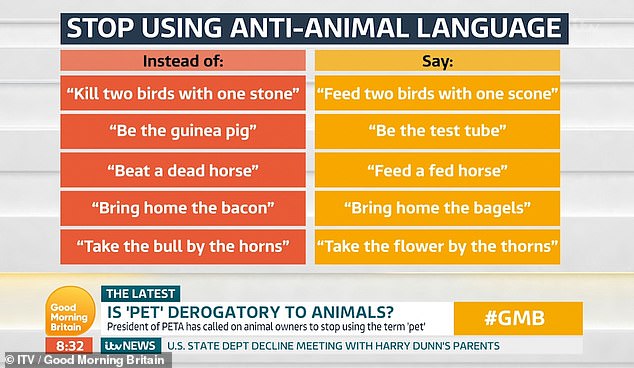 Hitting back: A guide flashed up on how to address ‘anti-animal language’ 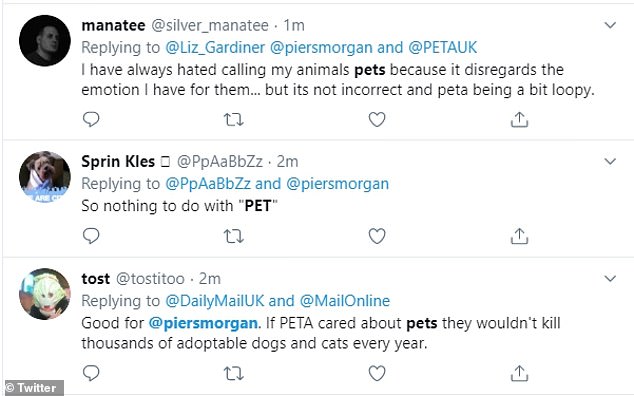 Backing him up: Throwing their support behind the star, fans swarmed Twitter