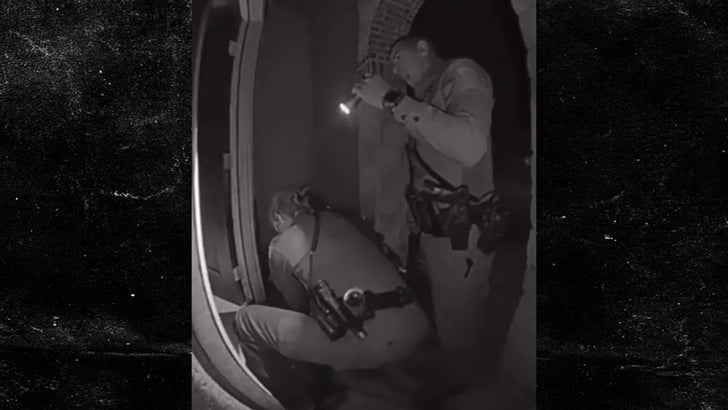 A man in Texas screamed for his father during a violent arrest that went down on his parents’ front door … and it was all recorded on their doorbell security camera.

The video starts with the driver, Zekee Rayford, pulling into a driveway. You can hear cops telling him to get down on the ground, but he runs to the front door. Officers gave chase, and Rayford started yelling for his dad before cops took him down by kneeing him and tasing him.

The arrest went down late Monday night in Schertz, a San Antonio suburb, and cops tell TMZ … they attempted to stop Rayford for running a traffic light. Instead, they say he kept driving until he got to the home owned by his parents.

Schertz PD claim Rayford fled when they tried to apprehend him, and as we see in the video … that’s when the struggle began, and the Taser was deployed. Cops did not mention any other use of force, although you can clearly see them tussling and kneeing Rayford. In the video, you also hear one of the officers threaten to tase the man who eventually opened the front door and questioned cops’ use of force.

We’re told Rayford was charged with felony evading in a motor vehicle, resisting arrest, and possession of marijuana. Schertz PD says it’s launched an internal investigation to ensure policies and procedures were followed.

Civil rights lawyer Ben Crump — who reps Breonna Taylor‘s family — weighed in on the video, saying, Zekee “was allegedly being pulled over nearby but drove home to have his dad present … EXTREME force was NOT necessary. We need police reform.”