In episode 5 of Loki, we journeyed to the temporal island of misfit easter eggs—a space somehow both on the timeline and not on the timeline, accessible by time transport in only one direction but not the other, and housing so many troublesome deviations that it was somehow easier to banish them here instead of just, like, exterminate them in the first place. Whatever the realm, this non-space space featured some trolling easter eggs including a Thanos Copter, a yellow helicopter marooned in a bog with the name “Thanos” written across the back.

This timeline junkyard doesn’t just contain variants; it contains the seeds of entirely different MCU outcomes. The Thanos Copter suggests one in which Thanos—maybe not “lives,” but at least doesn’t die by the hands of the Avengers. It makes the return of Thanos theoretically possible. But then again, everything is theoretically possible.

Before we get into Thanos Copter, a quick word about the implications of this timeline junkyard…

At this point, it seems as though we’ve concluded that the TVA is evil, that the pruning of timelines is a moral ill, and that our heroes must defeat the TVA so that all timelines can branch and exist in total unchecked freedom. This end has become the story’s central goal. Does this goal make any sense? Not in the least.

It’s been a basic moral maxim of the MCU franchise that freedom is good, and all forms of tyranny must be defeated. Temporal freedom, however, is not so clear. And if we really do want to say something like “the TVA must be defeated,” we need to understand the consequence of that goal: the infinite branching of infinite timelines.

Which timelines? Every timeline. One can imagine literally anything. One can imagine a timeline in which Thanos wins and does in fact wipe out half the human race. Or one in which entire races of people are enslaved by aliens. Or a timeline in which every human is born and lives in unbearable pain—and is unable to commit suicide. The point is that not every timeline is desirable, and the freedom for multiple timelines to occur is not always a welcome freedom. Which is all to say that the TVA is not necessarily tyrannical. Nor does its being overthrown make a lot of sense. It could very well be that the timeline the TVA claims to protect is, in fact—as analytic philosophers might say—the best of all possible worlds. This is the timeline in which the Avengers fight to save humanity, in which humanity is saved, and in which we get to look at a man like Michael B. Jordan. (Let us pause to imagine him….) Allowing this timeline to branch maybe isn’t freedom. Maybe it is doom.

Anyway. There’s a helicopter with Thanos written on it. What’s that all about?

What is the Thanos Copter?

Assuming this timeline junkyard houses all possible branches of all possible timelines, we can assume the Thanos Copter comes from one such aborted branch. That timeline is likely an allusion to the comics. The Thanos Copter first appeared in Spidey Super Stories #39 in 1979. Thanos uses the copter while attempting to take the comic’s equivalent of the tesseract. 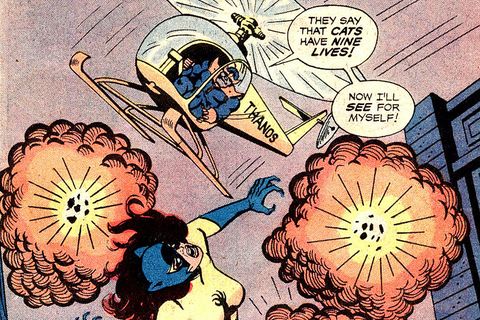