Margulies chatted a lot about why she chose to have a child after 40 — and she seems to have no regrets. (Margulies and husband Keith Lieberthal have one child, son Kieran.) “I was 41 when I got married and had a baby,” she explained. “I didn’t have a great example of marriage. My parents divorced when I was a year old and I didn’t have the most stable upbringing. I had a lot of love, but I never felt I had a good example of marriage, so why would I?”

She continued, “It took me a long time for me to get rid of my narrative of what marriage was and picking the wrong people. When I met my husband, it was six months into us dating when I thought, ‘Wow.’ … I just knew… life was so easy with him. … It felt good. He’s six years younger than I am.” The actor wasn’t sure if she could have kids, or even if she wanted them. When she shared this with her husband, he said, “I think it’s more important to find the person you’re going to spend the rest of your life with and the rest will follow.” And it definitely did: “We got pregnant totally by accident, without knowing,” Margulies said. “It was a happy coincidence.”

It’s no secret Margulies loves her family, but she’s dealt with some struggles as a working mom. Keep reading for more details. 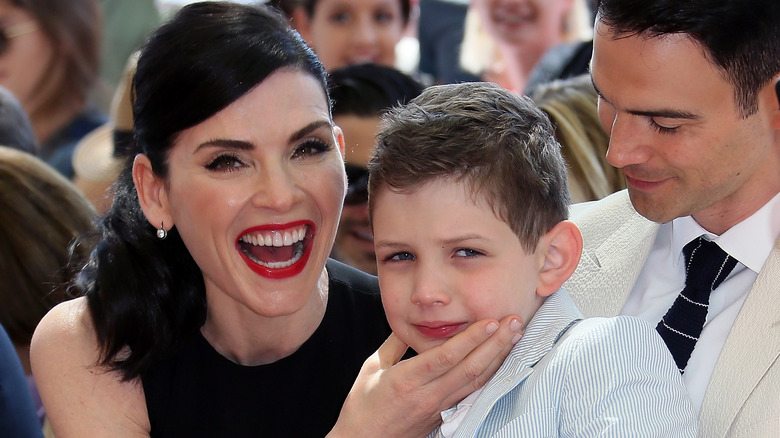 Working mom guilt affects all moms, even if you’re a celebrity like Julianna Margulies.

The actor put in long hours on the set of “The Good Wife,” but always made time to bond with her son Kieran, even if that meant reading to him while he was already sleeping. “I feel like if you can spend an hour a day with your kid, if you can’t have all day with your kid, but you could have one hour of quality time, it should be spent reading and interacting with them verbally because it gives them such confidence,” she told PopSugar in February 2013. As for that working mom guilt, it definitely comes and goes. ​​”If my kid is up all night because he’s sick, I still have to show up at work the next day, and that’s no one’s fault,” she said.

She added, “I just am a wreck when I get to work, and that’s something I have to deal with all the time. That’s okay. You wouldn’t want either the child or the job to go away so you just keep marching forward. And every now and then, you fall asleep standing up or have a horrific moment, hopefully alone in your bathroom, and sob your eyes out and say ‘I can’t do it all!'” Despite the challenges that come with being an actor and a mom, it’s clear Margulies found a way to make it work.