“You know what Mitch’s [McConnell] biggest thing is in the whole world? His judges,” president tells the Watergate reporter 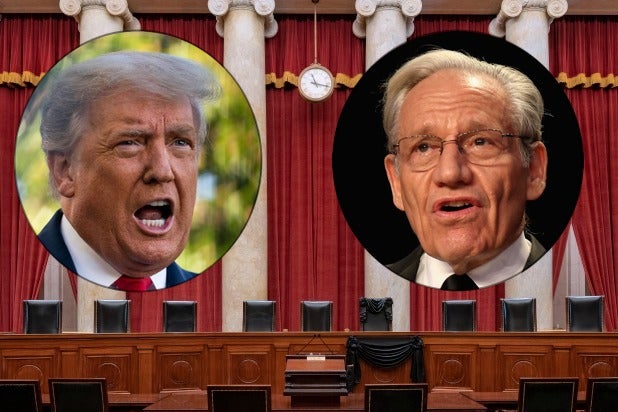 Bob Woodward released new audio tapes Sunday from his 18 interviews with Donald Trump in which he mentioned, among many things, judicial appointments four times and bragged about how he has reshaped the judiciary.

Release of the new tapes comes two days after the death of Supreme Court Justice Ruth Bader Ginsburg, whose seat Trump and Senate Majority Leader Mitch McConnell promised would be filled before the end of the year. In the recordings obtained by The Washington Post, Trump brags about his appointment of 187 federal judges, many of which were made possible by McConnell’s obstruction of Barack Obama’s appointees upon the GOP taking control of the Senate in 2014.

According to the Washington Post, Woodward noted that when he interviewed the president in the oval office, a list of judicial appointment orders was displayed on the Resolute Desk, “kind of like he was cherishing it.”

“You know what Mitch’s biggest thing is in the whole world? His judges,” Trump said, explaining that faced with a choice between pushing 10 ambassadors or a single judge through the Senate, “he will absolutely ask me, ‘Please, let’s get the judge approved instead of 10 ambassadors.’ ”

Remaking the bench with conservative judges was, indeed, one of his — and McConnell’s — goals and accomplishments. During his term, Trump installed 216 judges to the federal bench and two to the Supreme Court. The slow rate in filling seats the eight years prior was McConnell’s deliberate effort to block the confirmation of judges during Obama’s administration.

“The only one that has a better percentage is George Washington because he appointed 100 percent,” Trump told Woodward. “But my percentage is, you know, like, ridiculous.”

Woodward joked, saying maybe they should put a statue of Trump outside the Supreme Court, a suggestion that the president quickly responded to. “Oh, what a good idea. I think I’ll have it erected tomorrow. What a great idea. I’ll think I’ll use it,” Trump said, adding, “I won’t say it came from me.”

The day after Justice Ginsburg’s death, Trump said he expected to announce a nominee to fill the vacant seat and that he intends to pick a woman. McConnell called for a swift vote in the Senate, but Democrats – along with Sens. Lisa Murkowski (R-Alaska) and Susan Collins (R-Maine) — have said they will not support a vote before the election.

Woodward’s release of the Trump interview tapes earlier this month alongside his new book “Rage” sparked a new wave of criticism against Trump, as they revealed that the president knew about the dangers of the COVID-19 virus as early as Feb. 7, when he called the virus “deadly stuff” to the famed Watergate reporter. Three weeks later, Trump declared that the virus would disappear “like a miracle” in public comments.