When This Is Us Season 4 ended, the focus was squarely on Randall and Kevin’s fight. Over the extended break between seasons, most of the theories and gossip also centered on the two brothers. How and when would they make up? Could a rift this deep be mended, or would there always be a chasm between them? But in the background, both actor Chrissy Metz and showrunner Dan Fogelman reminded viewers not to forget about Kate, promising she had a big secret to spill in Season 5. Now that the season revealed Teenage Kate was pregnant, it seems that was the big bombshell they were hinting at.

Warning: Spoilers for This Is Us Season 5, Episode 4 follow. The good news is, Kate’s trip to see her potential baby’s birth mother Ellie get and ultrasound went well. Not only is the baby healthy, but also, Ellie isn’t having a change of heart about Kate and Toby as parents. Even after Kate surprised her with Chloe as a possible baby name, which Ellie disliked, she did not waver. Ellie was resolute that not only was she making the right choice, but these were the right people.

In telling Kate all this, Ellie admitted how she considered having an abortion before going the adoption route. She got as far as the clinic before realizing it wasn’t the right choice for her. Ellie’s gut said no, and she listened. That’s why she said she trusts those same instincts now, with Kate and Toby. 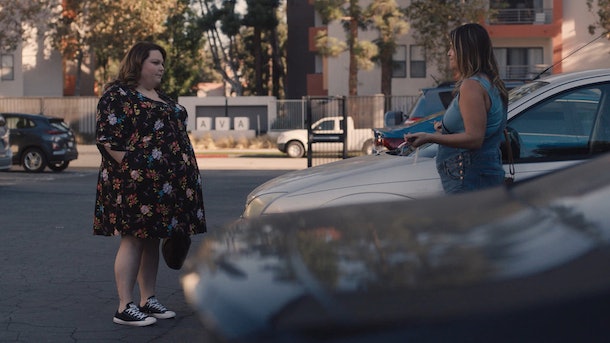 Surprisingly, Kate seemed rattled by Ellie’s almost-abortion story, though she insisted it’s not that she was judging Ellie for her choice. It wasn’t until Kate got home that day and sat down with Toby that she began to explain her reaction to what she learned. She admitted to Toby that there was something something she never told anyone — not her mother, not her brothers, no one. As the scene flashed back to the days just after Kate and Mark’s fateful trip to the cabin and Rebecca’s ride to the rescue, Kate was seen turning down a trip to New York to visit Kevin and Sophie. She insisted her friend would be coming over to watch Dawson’s Creek, but as Rebecca nodded and said goodbye, it was obvious this was a lie.

Instead, the scene jumps to Kate standing in her bathroom, holding a pregnancy test. Kate’s face clearly told the results of the test even before the stick was shown on screen: She was pregnant, with Mark’s child. And while the show does not spell it out, knowing the history of Kate’s teenage years does not include having a baby, viewers can infer that a young Kate had an abortion without any loved one to support her — and she never told a soul until now.

This Is Us continues Tuesdays at 9 p.m. ET on NBC.

Why a royal biographer thinks Prince Harry is pathetic