Fans of the true-crime anthology series “Dirty John” first saw Connie Britton and Eric Bana take on the roles of businesswoman Debra Newell and the titular John Meehan, a charismatic con artist, in 2018’s Season 1 on Bravo. The gripping story and star-stacked cast built a fanbase for the series, leading USA to debut Season 2 in 2020 and, per What’s on Netflix, release all episodes to U.S. Netflix this May.

Season 2, per Newsweek, told the riveting true story of Betty Broderick (portrayed by Amanda Peet) and her husband Daniel Broderick III (Christian Slater). With Betty suspecting Daniel and assistant Linda Kolkena of being extramaritally involved beginning in 1982, her husband ‘fessed up in 1985, and the pair divorced, with the court granting him sole custody of their four kids, Kim, Leek, Rhett, and Daniel Broderick IV. After Daniel remarried none other than Kolkena, Betty shot and killed them both in November 1989.

Sentenced to 32 years in prison, Betty was denied parole in 2010 and 2017, per The San Diego Union-Tribune, with Board of Prison Terms Commissioner Robert Doyle telling her in 2016, “Your heart is still bitter, and you are still angry,” adding that she was “still back 20 years ago in that same mode,” per the Chicago Tribune. With her next parole hearing not until 2032 (when she will be 84), “Dirty John’s” depiction of her tragic arc, naturally, doesn’t cover every base.

Here is what the kids are up to now.

Betty Broderick's children remain close with their mother, but their opinions are split 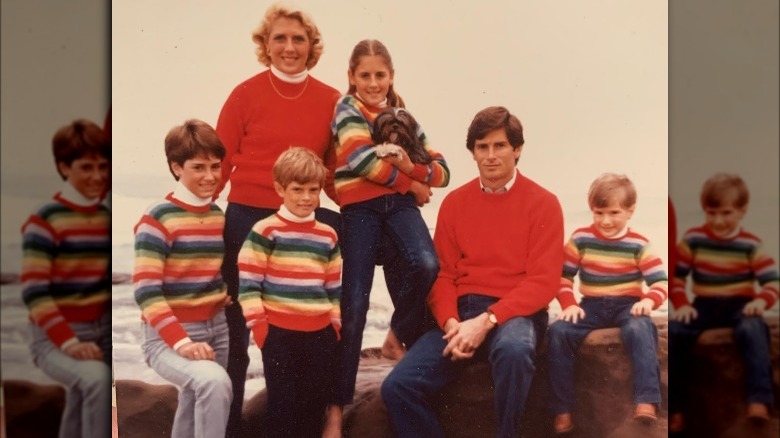 Betty Broderick wrote about her four children in her 2015 memoir, “They were my priority and I wanted so badly for them to have a happy childhood” (via Oprah Daily). It looks like Lee, Rhett, Kim, and Daniel have grown up relatively well-adjusted given their gruesome familial past. Kim and Rhett reside in Idaho with their own families, while Dan is in California with his own, per the outlet. The four siblings all visited Betty in prison growing up, with Betty showing L.A. Magazine a family portrait taken of her with her four children and her two granddaughters (a number that grew in subsequent years) in 2009.

Despite their closeness, Dan and Kim advocated against Betty’s release as recently as 2014. Dan told CBS News in 2010, “I know my mother is a good person. But along the way she got lost. Releasing a lost person into society could be a dangerous mistake.” Kim meanwhile, per NBC News, released a 2014 memoir in which she said her mother still lacked remorse. Rhett and Lee, however, were of the opposite mind, with Lee telling a 2010 parole board via The San Diego Union-Tribune, “She should be able to live her later life outside prison walls.” Rhett told Oprah Winfrey in a 1992 interview, “She’s not a danger to society—the only two people she was a danger to are dead.”

Talk about a complicated family relationship.