After meeting at a bar in South Delhi, India, in August 2019, Clémence Vidal de la Blache went to the nearby home of Rohan Venkataramakrishnan. He had invited her and some others to “finish conversations” they had started at the bar.

“He had an incredible collection of books on Delhi heritage as well as a collection of Marvel figurines,” said Ms. Vidal de la Blache, 34, the deputy country director in Delhi for Agence Francaise de Developement, a French bilateral development bank. (She graduated from the London School of Economics and Sciences Po, where she was class valedictorian, with a joint degree in international affairs and international relations.)

“I borrowed a few books from him as an excuse to stay in touch,” said Ms. Vidal de la Blache, a French citizen who was born and raised in Arzon, France.

“Rohan was actually traveling to Europe about a week after we met, so we moved pretty quickly and managed to squeeze in five dates in eight days,” she said, noting that she asked him out first, to see a Spider Man movie.

“The whole time he was gone,” she said, “we stayed in touch, furiously.”

By the time his return flight landed in Delhi, she knew almost everything there was to know about Mr. Venkataramakrishnan, 31, a deputy editor at Scroll.in, an independent news organization in India. (He gradated from the University of Southern California with a degree in journalism.)

“He was a little bit of a nerd who told bad jokes,” she said, laughing. “But he was very smart and very respectful, and so much fun to be around.”

He was also partial to sunrises, which she found out in February 2020, when they made a decision that rendered them virtually inseparable for the next three months by quarantining together in the early days of the coronavirus.

He moved “with all of his clothes and all of his books,” Ms. Vidal-de-la-Blache said, laughing again, “and of course, all of his Marvel figurines.”

They would quarantine together again in August 2020, when she took him to her brother’s wedding in Arzon, not far from the nearby tiny fishing village of Brittany, France, where her grandparents lived.

While there, Mr. Venkataramakrishnan had walked with Ms. Vidal de la Blache to her favorite spot at the entrance of the Gulf of Morbihan, at midnight on the anniversary of their first date.

He soon dropped to one knee in front of a statue of St. Anne carved into a menhir, pulled out a ring and proposed. She hugged him and gave him a kiss, but she did not supply an immediate answer.

Instead, she began walking away, leaving him briefly aghast. “You have to say something,” he said.

As it turned out, she had come prepared for the possibility of a proposal. She had brought a small tote bag, which carried a small bottle of champagne, macarons and a Mont Blanc pen, which she offered as a gift when she turned around and made a counterproposal.

They were married Feb. 8 in New Delhi, by a sub-divisional magistrate under India’s Special Marriage Act. Planning around Covid restrictions, the couple had 23 family members and friends at the ceremony, including the groom’s parents and the bride’s, Cecile and Olivier Vidal de la Blache. 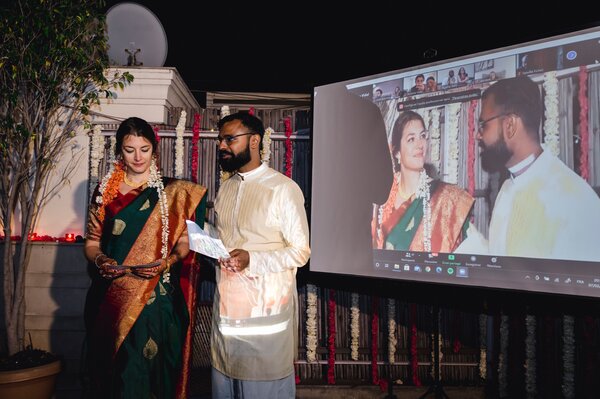 After the wedding, the bride and groom continued with the festivities at a nearby park, where 200 more virtual guests, mostly from India and France, watched on Zoom.

The couple had a digital pre-wedding ceremony, including a traditional Mangalorean Catholic custom called a roce, as well as a virtual sangeet with dances and speeches from the French and Indian families and friends.

“She’s someone who is tender, kind and extremely beautiful,” the groom said. “She is also someone who is curious about the world, and I intend to see a lot of it with her in the coming years.”