Kelsea Ballerini has been giving country music some serious fashion credibility in the last few years. In honor of her 28th birthday on Sept. 12, 2021, Wonderwall.com is taking a look back at the singer’s best sartorial moments, starting with her 2020 CMA Awards gown. Kelsea took our breath away in this strapless Dolce & Gabbana dress covered in rose embellishments and ruby-red jewels. She enhanced the look with a brighter red lip, silver cuff earrings and simple combed-back hair.

Kelsea Ballerini posed outside to show off the shimmery blue long-sleeved dress she wore to celebrate the 2021 CMT Music Awards amid the coronavirus pandemic. As the evening’s host, Kelsea wore many outfits, but this was the showstopper she chose to perform her song “I Quit Drinking.”

In 2017, Kelsea Ballerini was positively glowing at the Pre-Grammy Gala and Salute to Industry Icons honoring Debra Lee. The country singer looked like a million dollars in an effervescent champagne-colored gown, a shiny silver belt and her hair in a ballerina bun.

RELATED: Most memorable fashion of Grammys past

Ahead of the 2018 Super Bowl, Kelsea Ballerini opted for a simple but stunning short and shiny blue dress with elongated sleeves at the DIRECTV NOW Super Saturday Night Concert.

Kelsea Ballerini was white-hot and super-cool at the 2019 CMT Music Awards where she wore a sparkly one-shouldered gown. The dress featured two high slits and just enough ruffles. Her ultra-high ponytail kept the look feeling young and fun.

Kelsea Ballerini looked like an old pro at her first Grammys back in 2017. The best new artist nominee wore a flesh-toned Ines Di Santo dress with a lace overlay and blue embellishments. A total work of art!

Kelsea Ballerini showed her fashion range at the Michael Kors show during Fashion Week in February 2020. She went for an ’80s look in a calf-length dress with puffy shoulders, sheer black panty hose and a studded white belt plus white-tipped pumps.

Kelsea Ballerini walked the red carpet at the 2016 Academy of Country Music Awards in a princess-like purple gown. Kelsea made the look modern with turquoise earrings and a slicked-back hairstyle tucked behind her ears.

At the 2018 ACM Awards, Kelsea Ballerini expertly balanced an angelic look with sex appeal. She wore her hair in beachy waves, which went perfectly with her white dress featuring a thigh-high slit. The corseted bodice was partially obstructed by the halter-style neckline, striking a beautiful balance between bared and covered up.

At the CMA Awards in 2016, Kelsea Ballerini opted for a darker look but managed to make it just as flawless as her sunnier looks. She also added a deep berry lipstick to match her gown covered in maroon and orange splashes.

“It’s sparkly. It’s a one-of-a-kind dress from Australia. It’s my first CMA Awards, and I wanted to kind of show off and have a cool dress,” Kelsea Ballerini told The Boot in 2015 when she was just 22 and nominated for best new artist.

At the 2018 CMA Awards, Kelsea Ballerini looked mature in the best way possible in a Zac Posen gown. Her bright pink dress featured a corset-like bodice, a slim skirt with a small train and pointed shoulders that all combined to deliver a perfect amount of drama.

Kelsea Ballerini honored the King of Rock ‘n’ Roll at the Elvis ’68 All-Star Tribute Special in 2018 in a super-sparkly silver blazer that she wore as a dress over a white button-down shirt. Her slicked-back hair gave the look a masculine touch that was well-balanced against her equally sparkly booties.

Kelsea Ballerini’s blazer game is strong. At the 57th Annual ASCAP Country Music Awards in 2019, she opted for a bright yellow jacket-and-matching-shorts combo by Dundas. The color looked great on her and the embellishments on both pieces added some funkiness.

Showing off some skin in sparkles! At the American Music Awards in 2019, Kelsea Ballerini opted for a glitzy wide-open blazer paired with matching high-waisted trousers. She styled the look with one of her favorite hairstyles: sleek and straight.

Kelsea Ballerini leaned into a more princess-like feel in Jenny Packham at the 2019 Grammys. The singer skipped the bold colors she’s often worn in favor of a flesh-toned twinkling dress topped with a bright coral lip that kept her from looking washed out.

For the 2017 CMT Music Awards, Kelsea Ballerini left little to the imagination in a black-and-white cut-out dress by Haney. Her smoky eyes and parted and tucked-back hair made the look all the more alluring.

Kelsea Ballerini rang in 2019 on “Dick Clark’s New Year’s Rockin Eve with Ryan Seacrest” special in a gladiator-esque outfit. For her performance on the annual show, Kelsea wore a three-quarter sleeved blouse covered in a gold-and-black cheetah print with a contrasting gold-and-black miniskirt. Even her nails matched the theme!

Kelsea Ballerini’s 2018 CMT Music Awards outfit was made for her — literally. “I was in New York … and visited my friend Brandon Maxwell and he was like, ‘Can you try on those pants?’ And I was like, ‘Oh, the black sequin pants?'” she explained to “Entertainment Tonight” of how she ended up in the chic two-piece ensemble. “And I tried them on and he got the roll of fabric and made this top for me.”

Kelsea Ballerini has never shied away from showing off her abs, and the two-piece outfit she wore to the 2020 iHeartCountry Festival was the perfect way to do it. Her ’70s-inspired look featured sequined wide-legged pants and a flirty lace-up crop top with a ruffle embellishment and flowered straps. 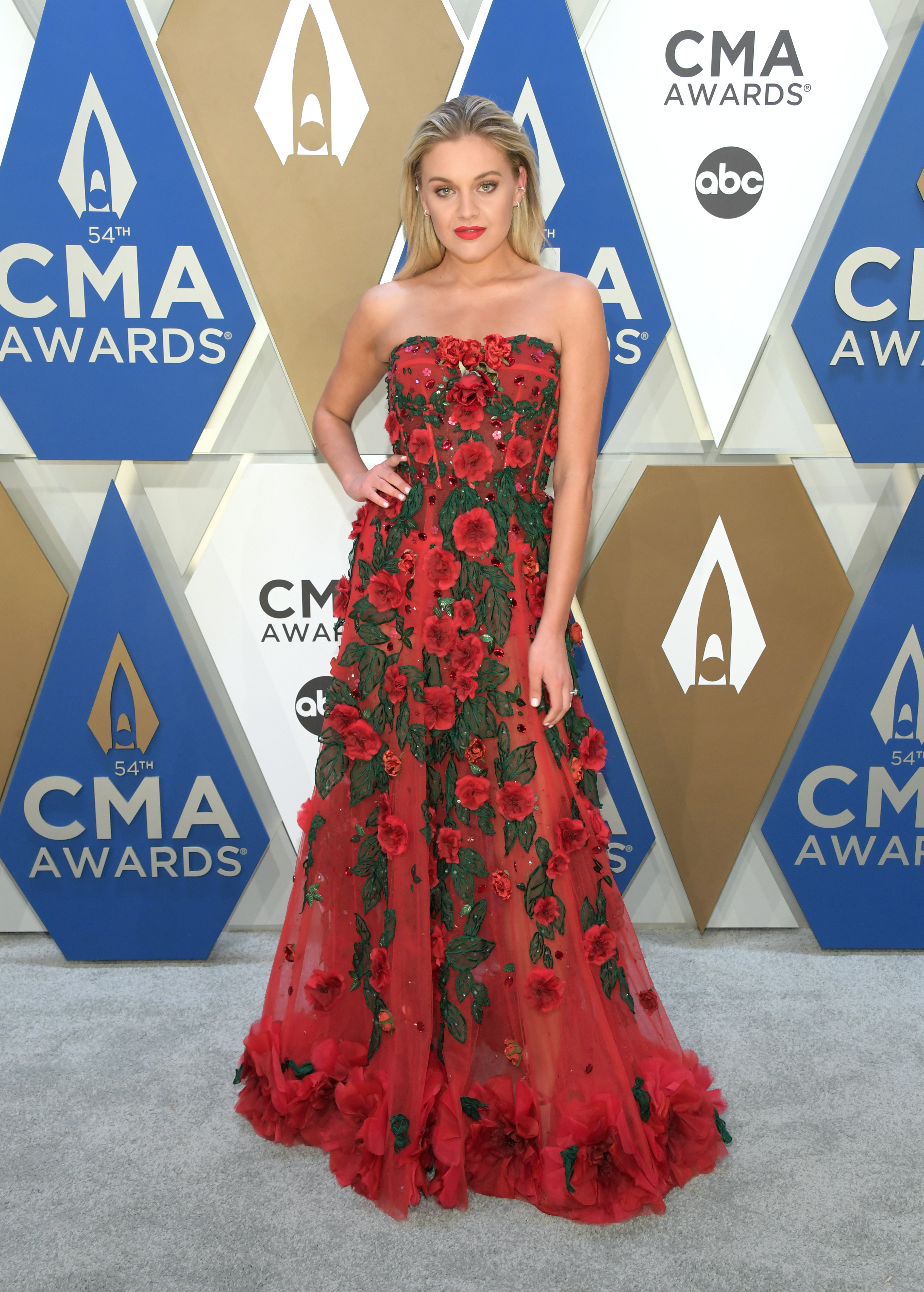 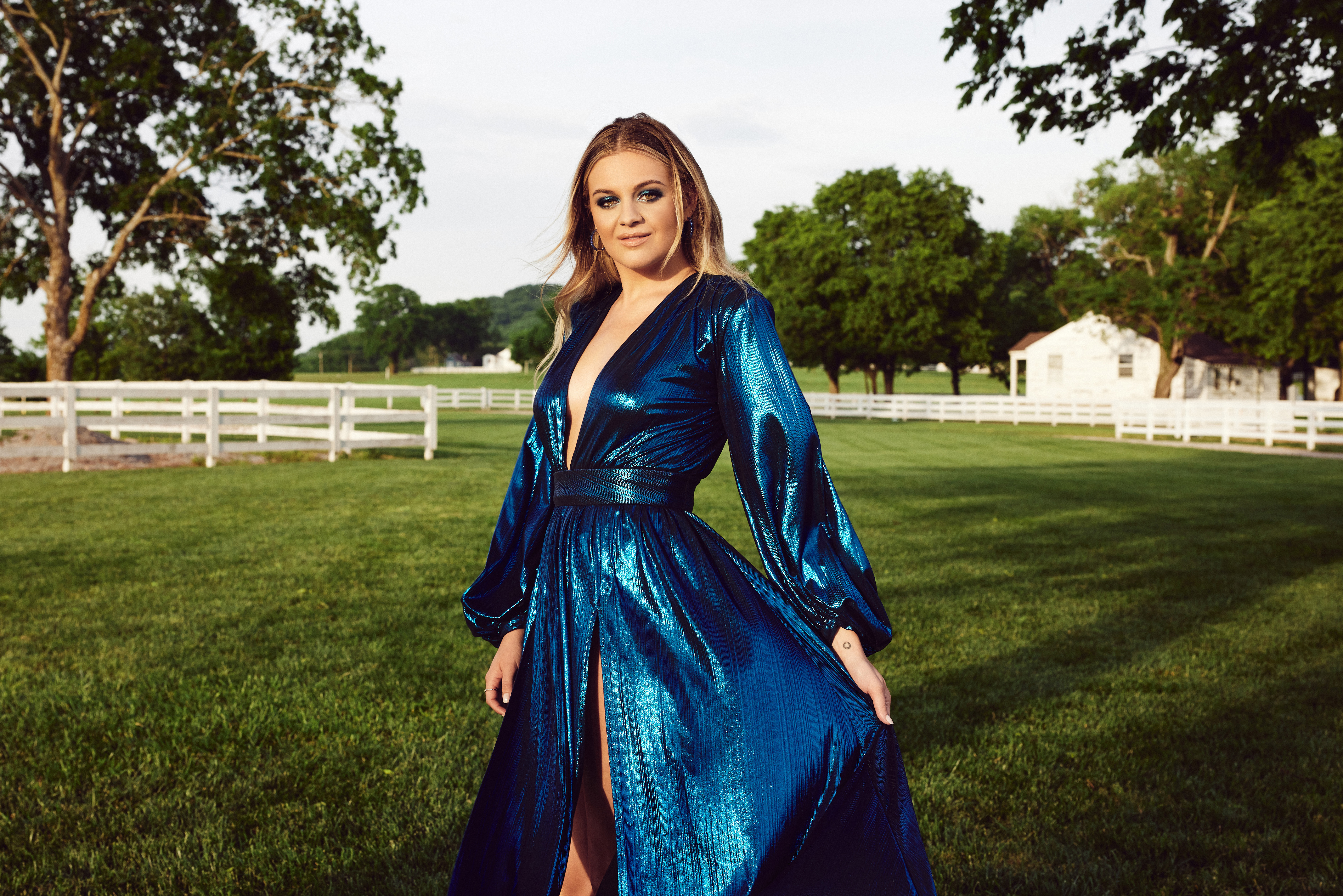 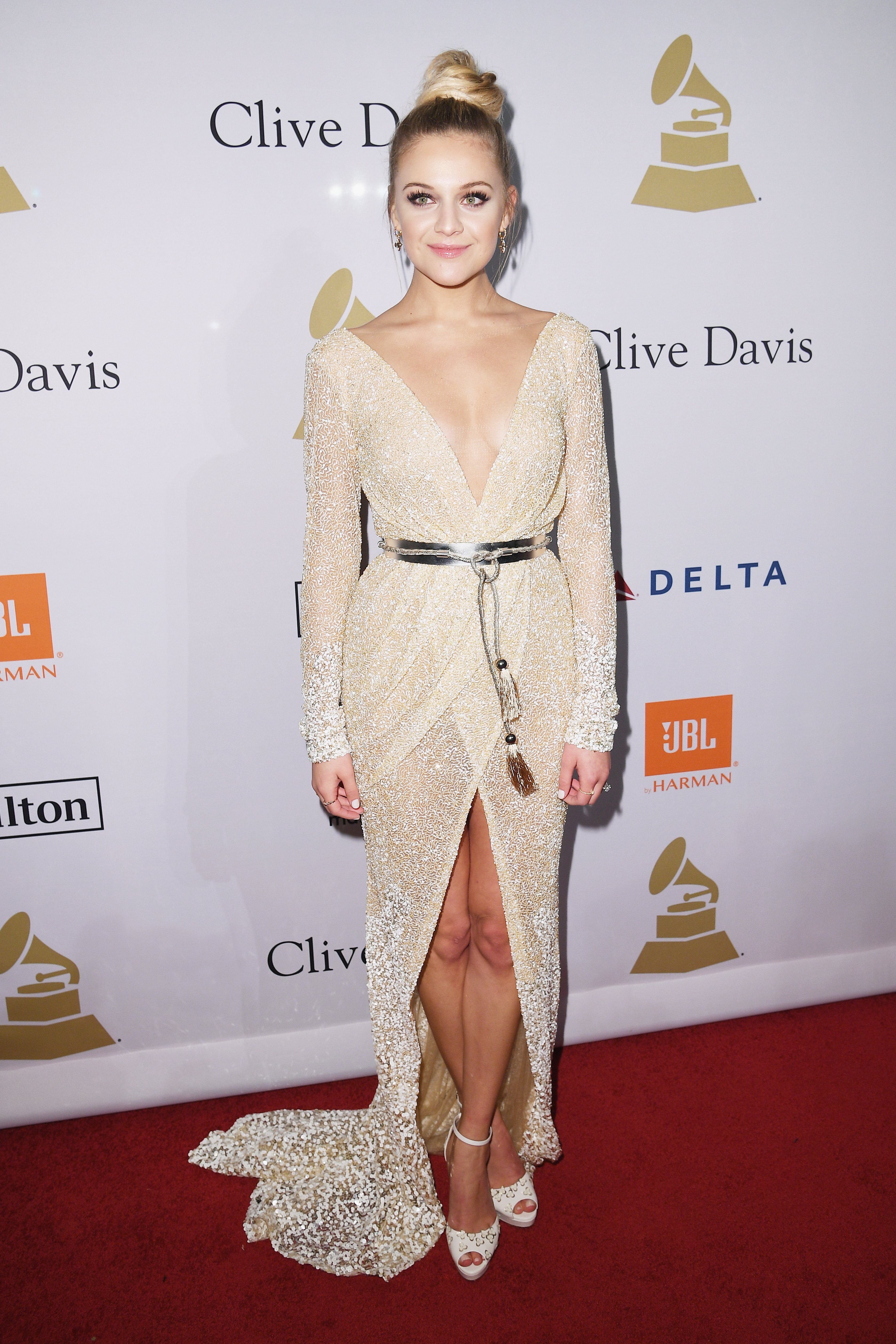 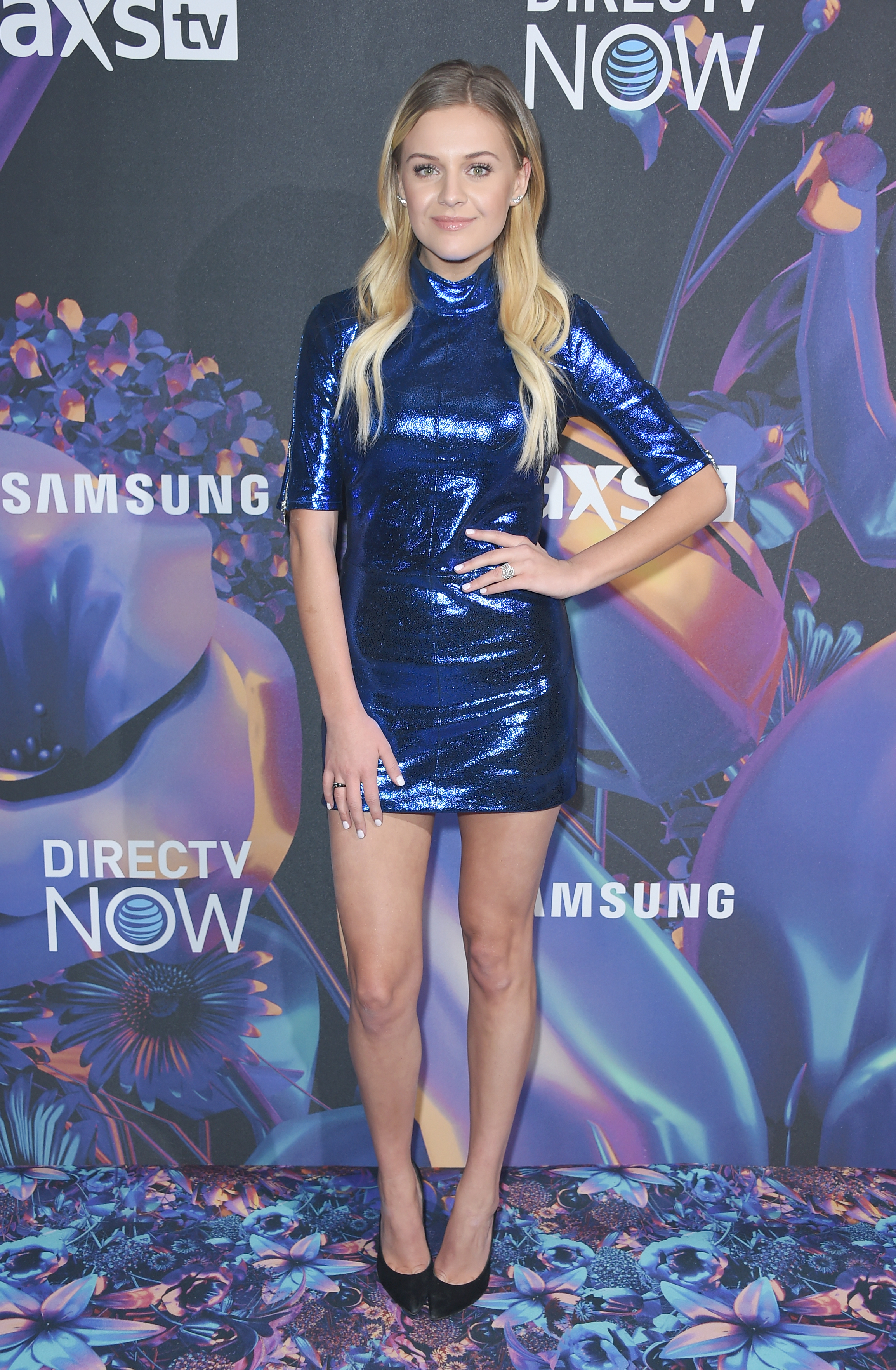 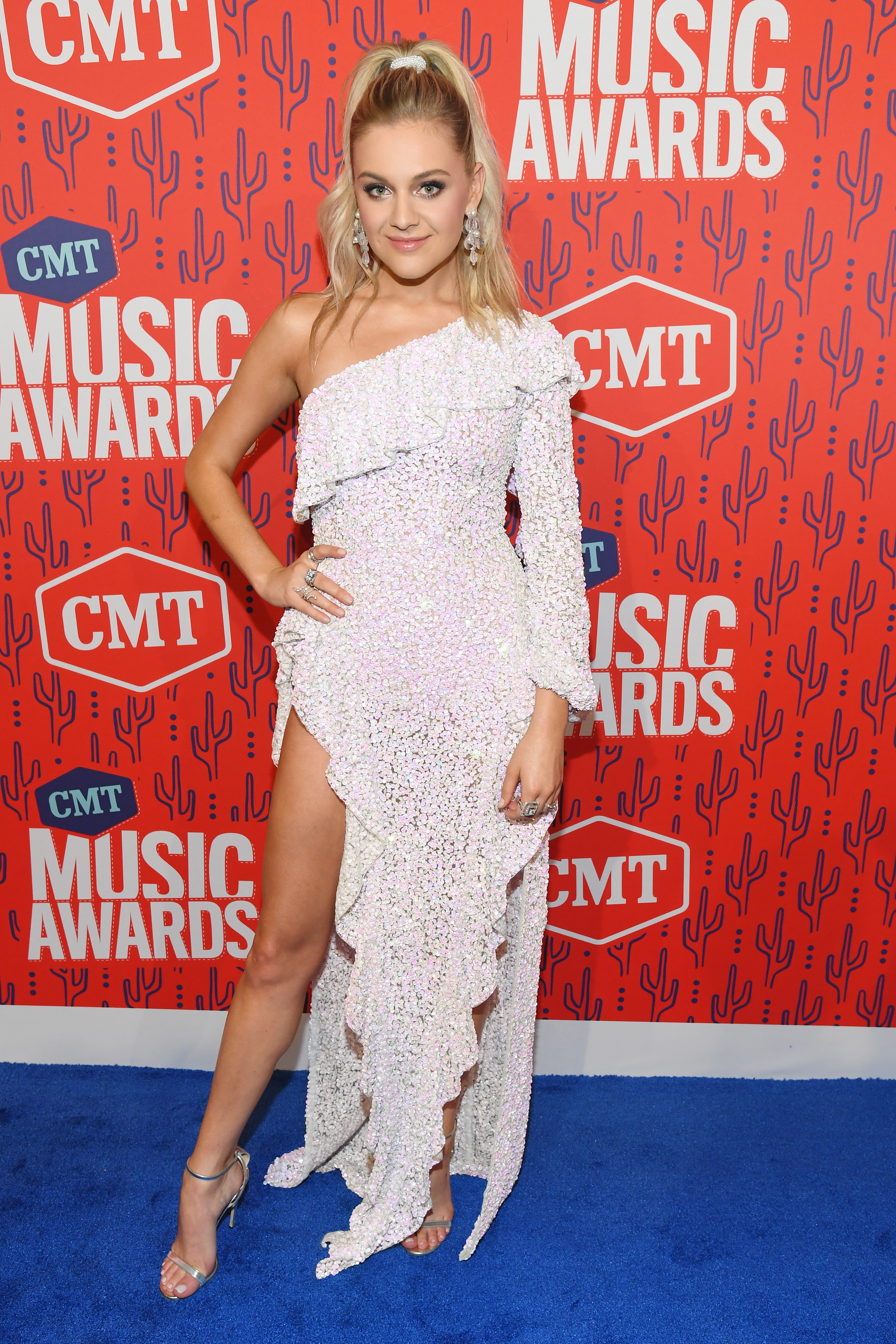 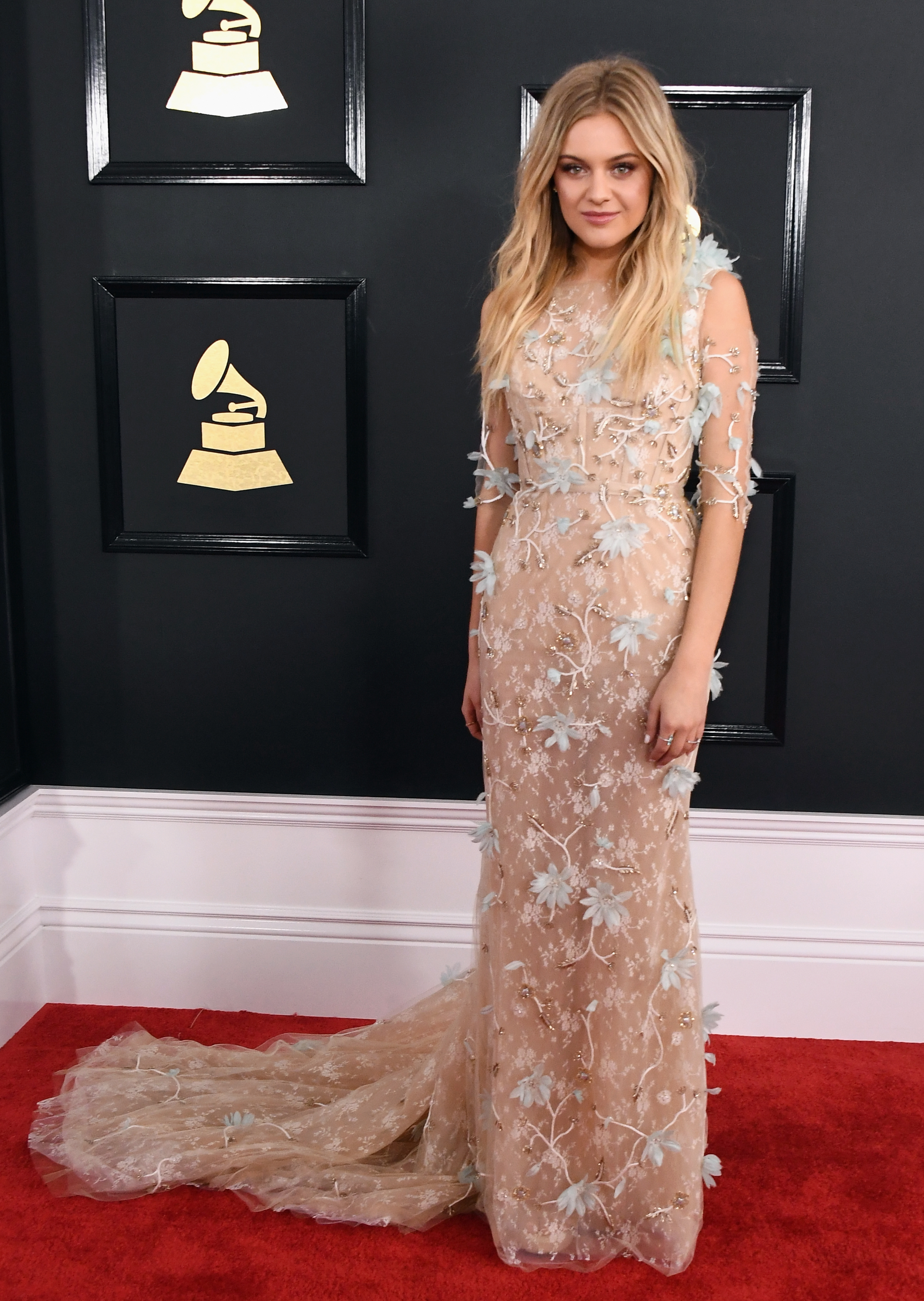 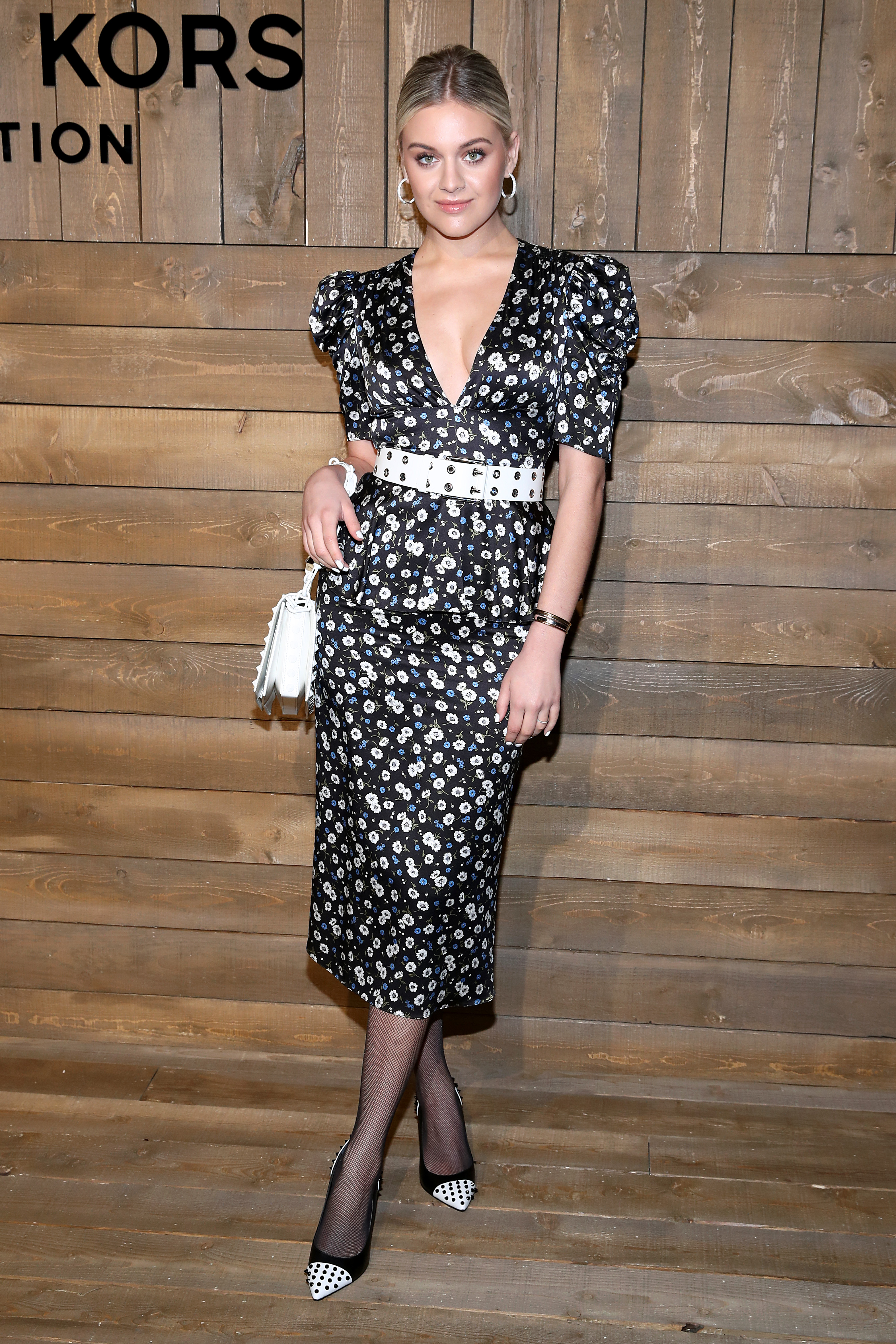 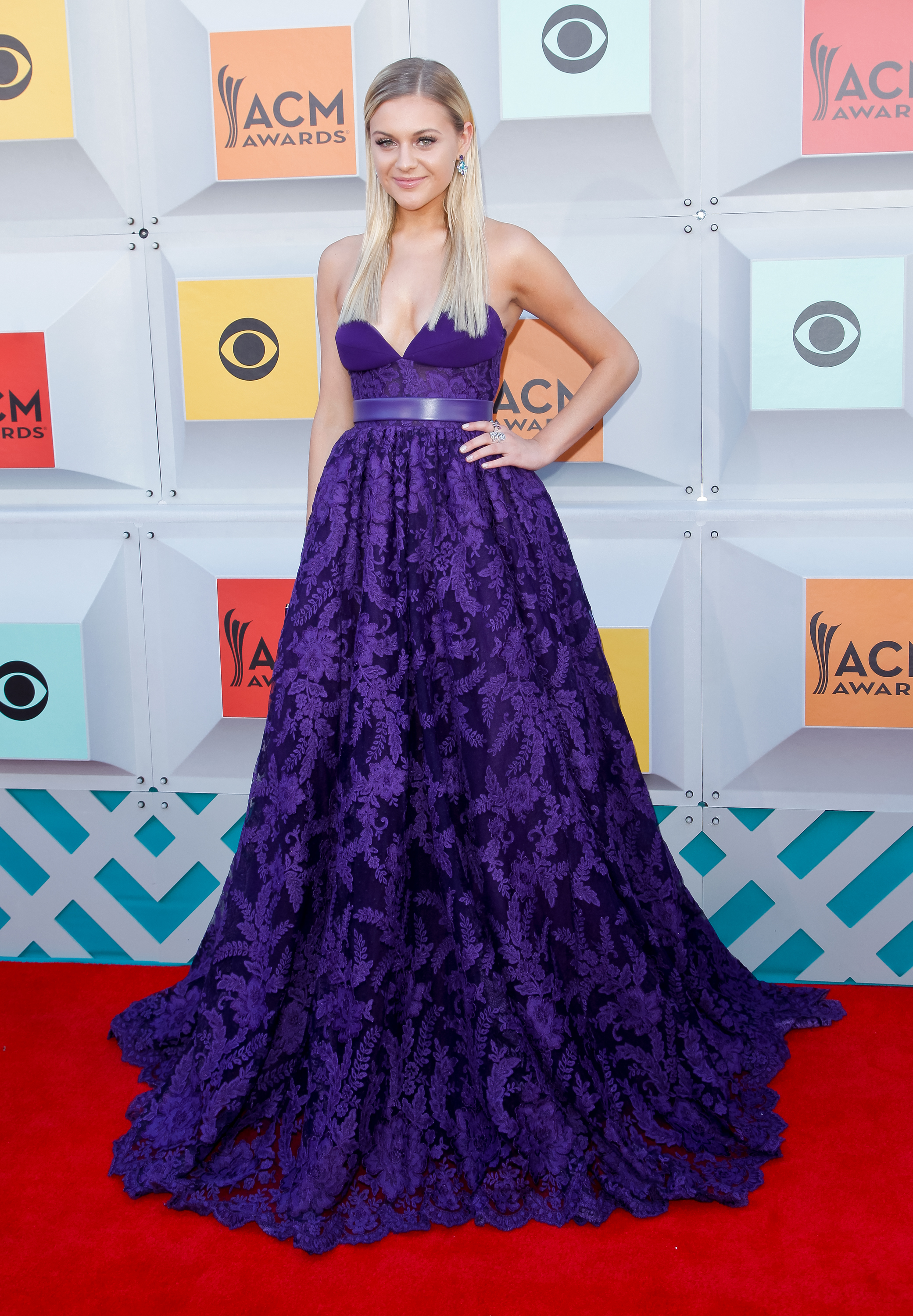 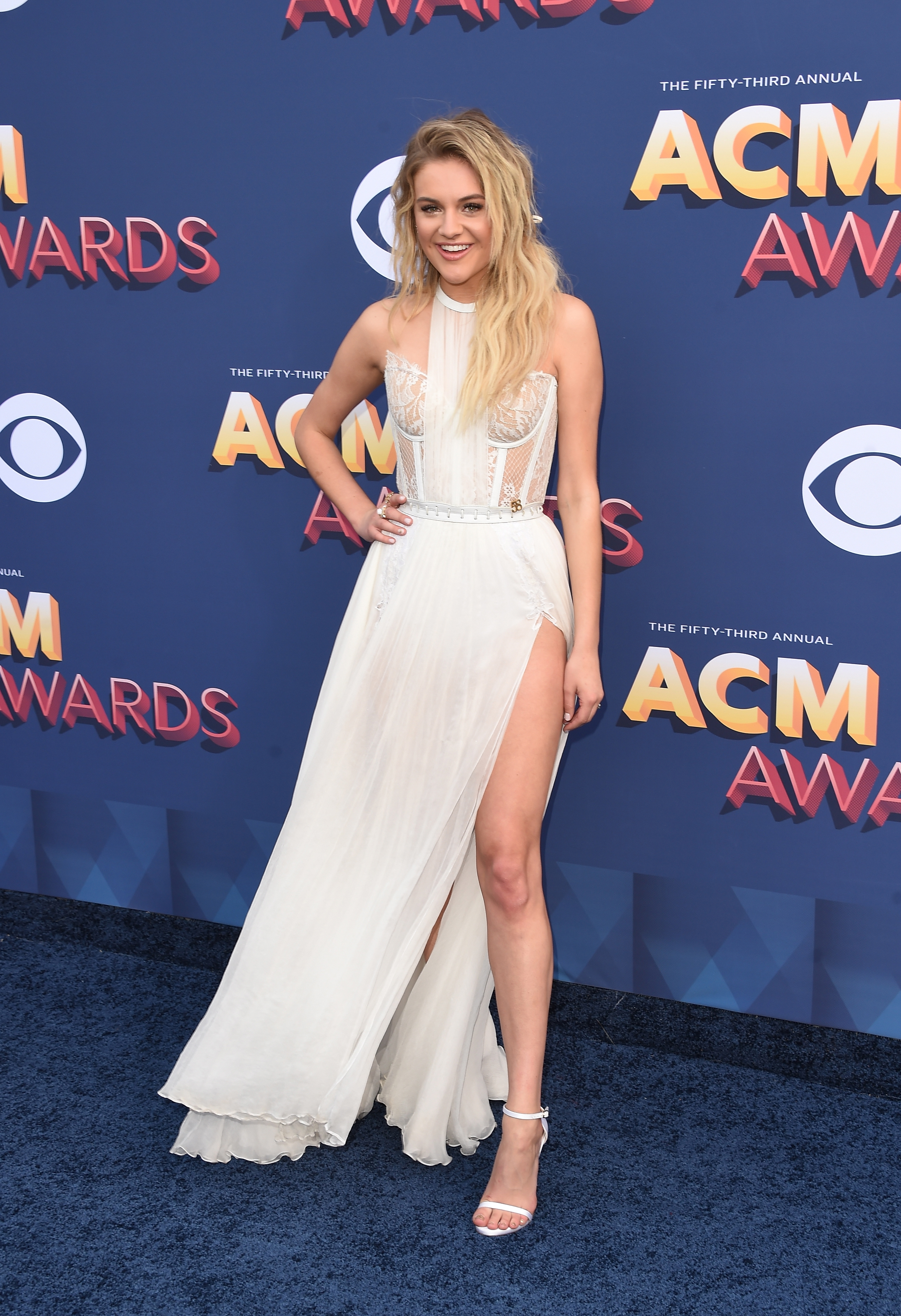 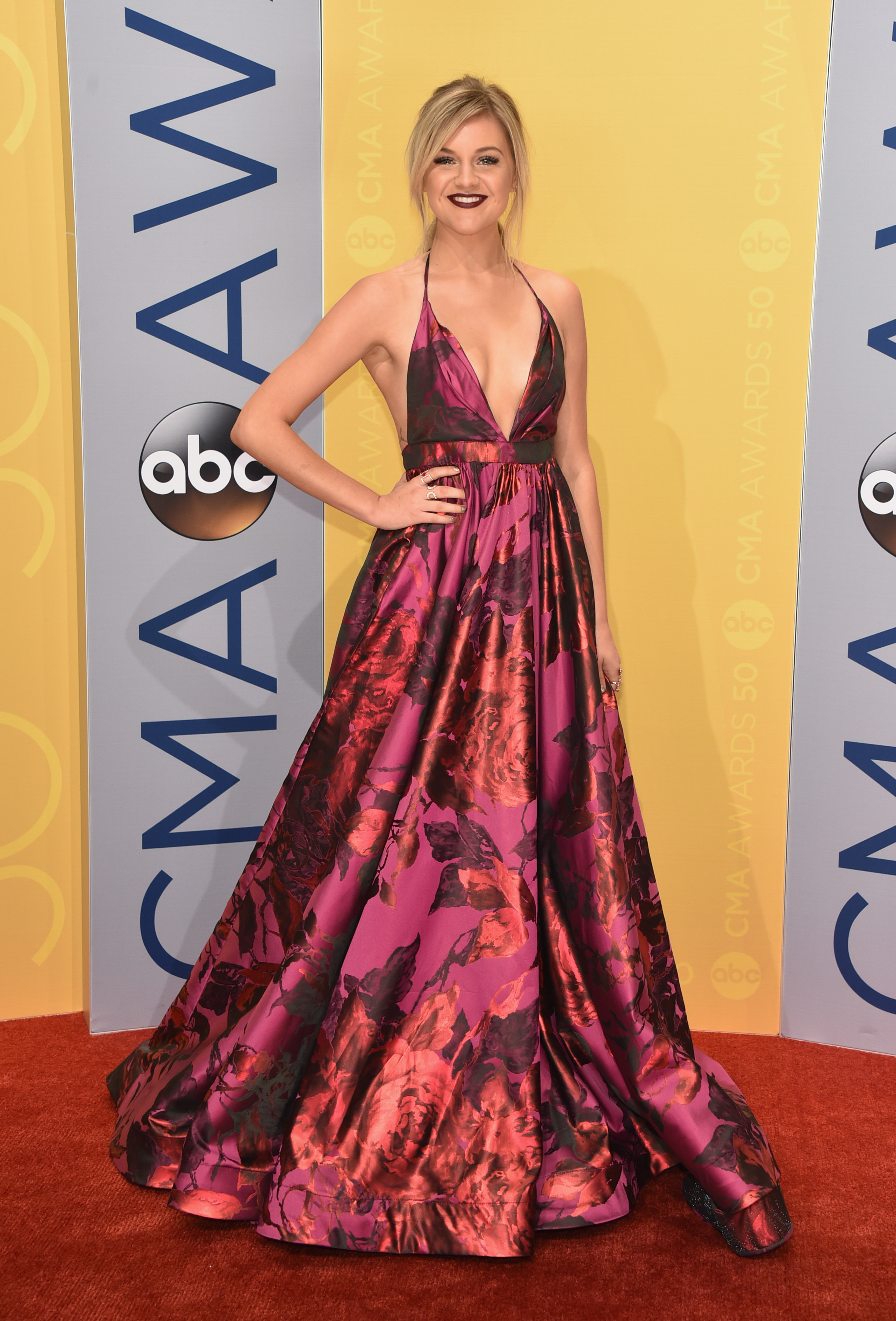 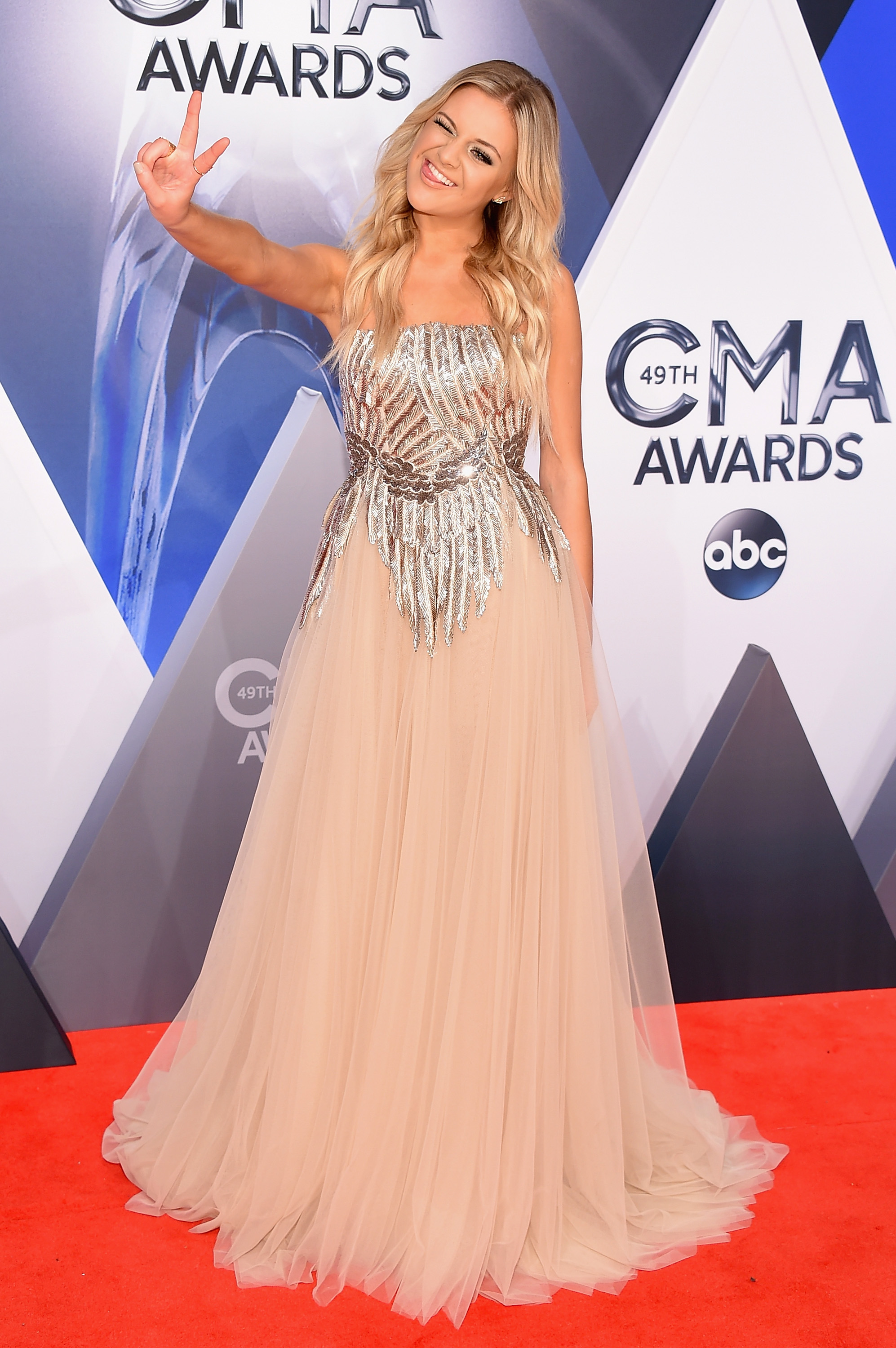 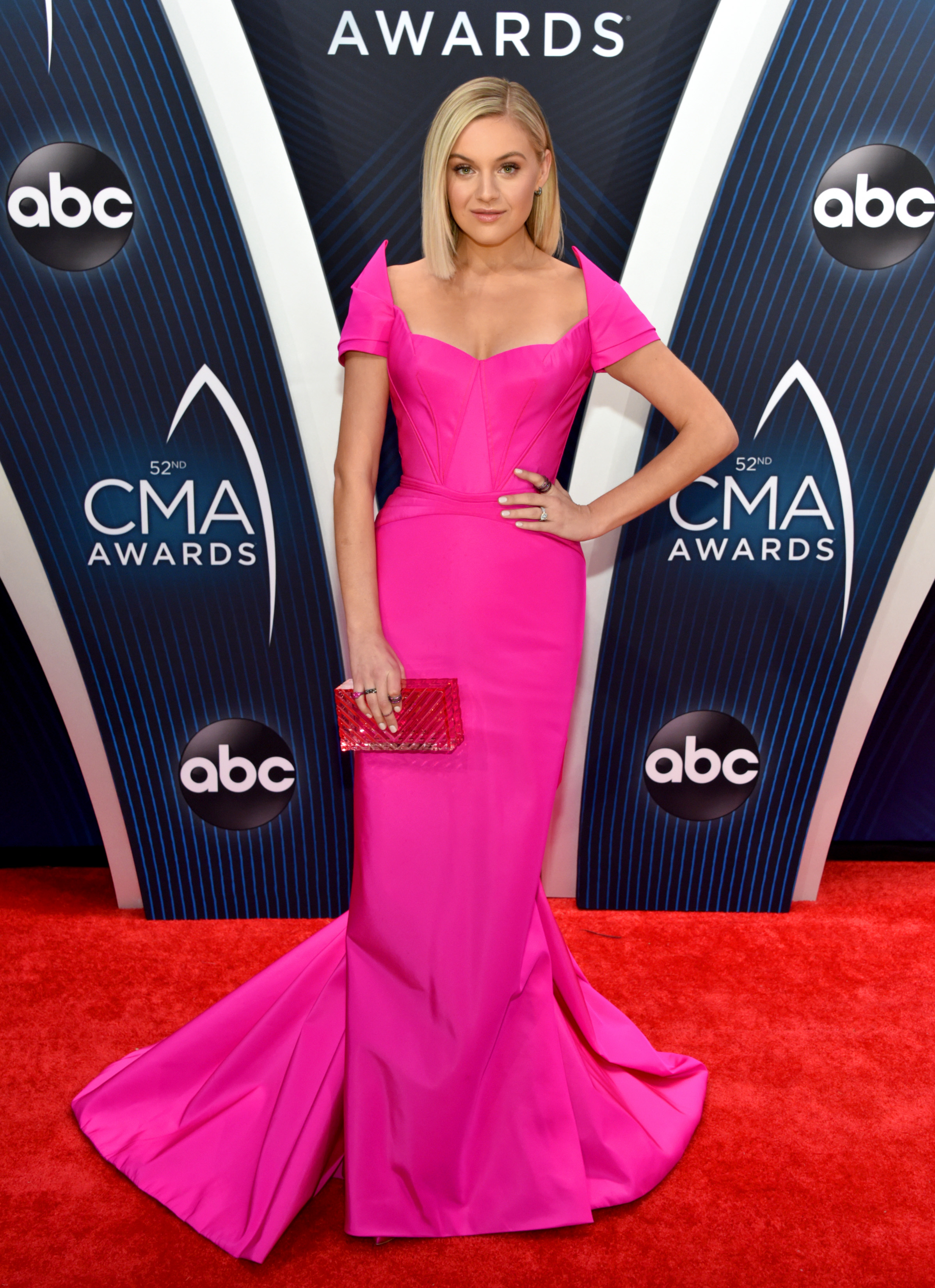 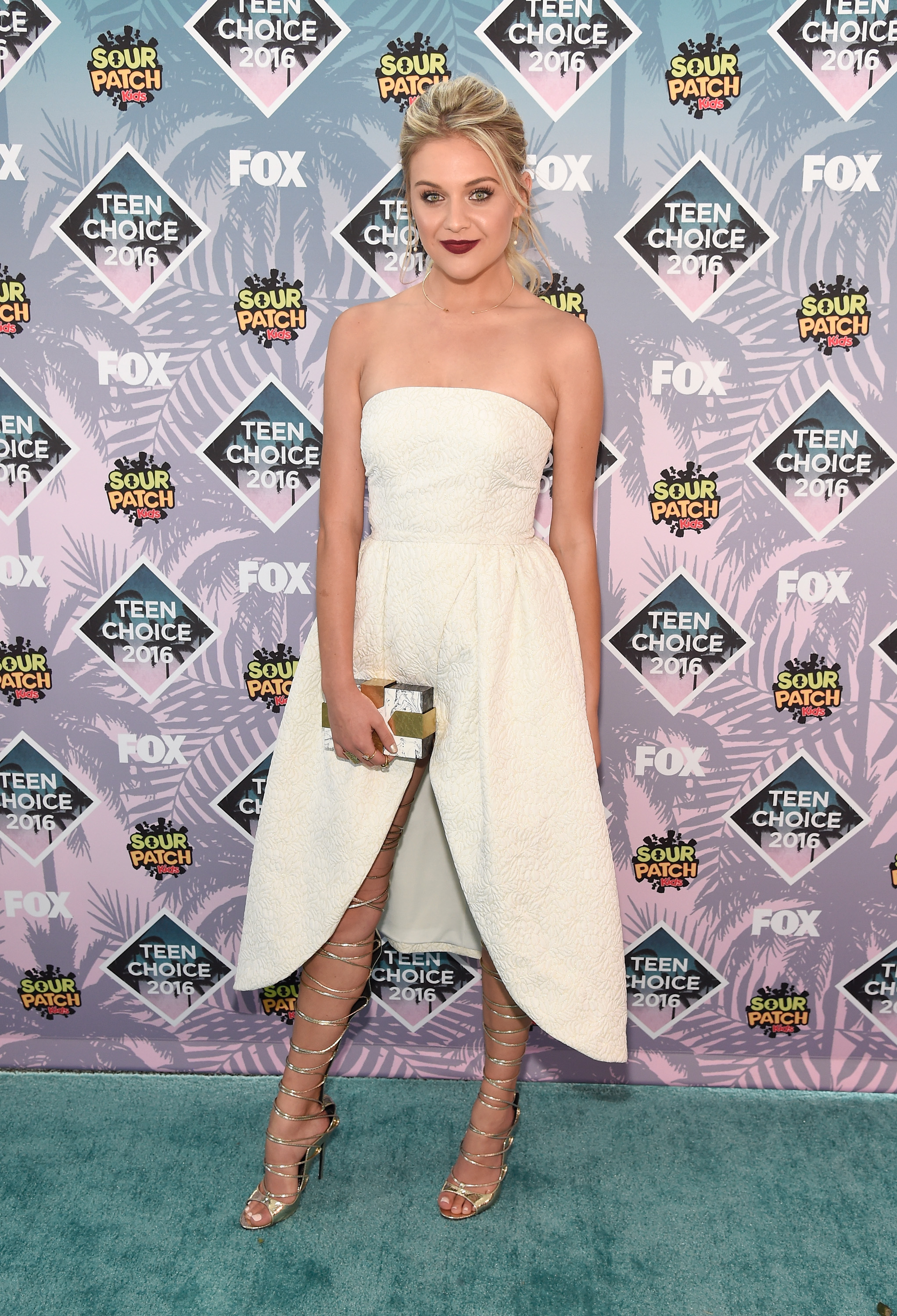 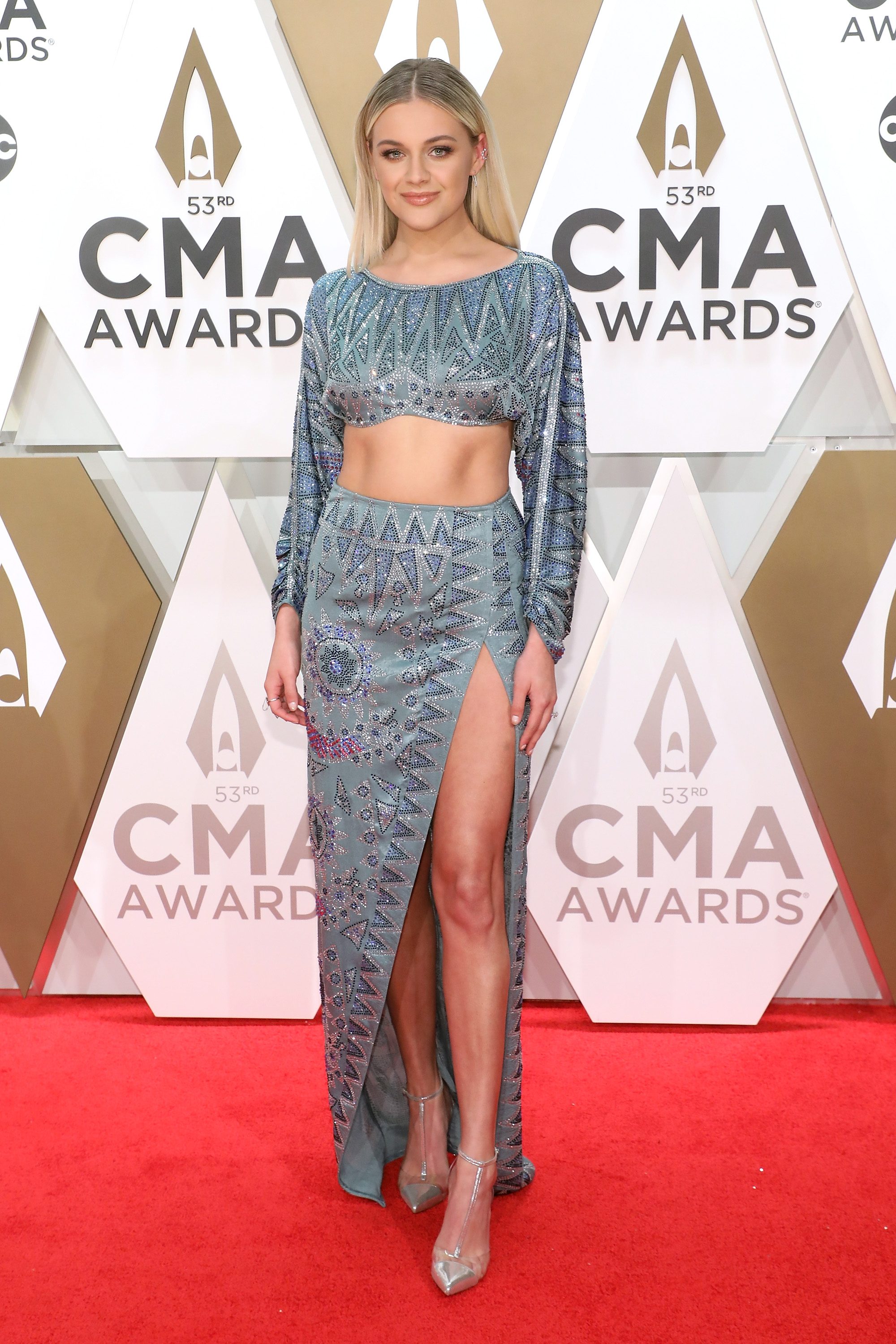 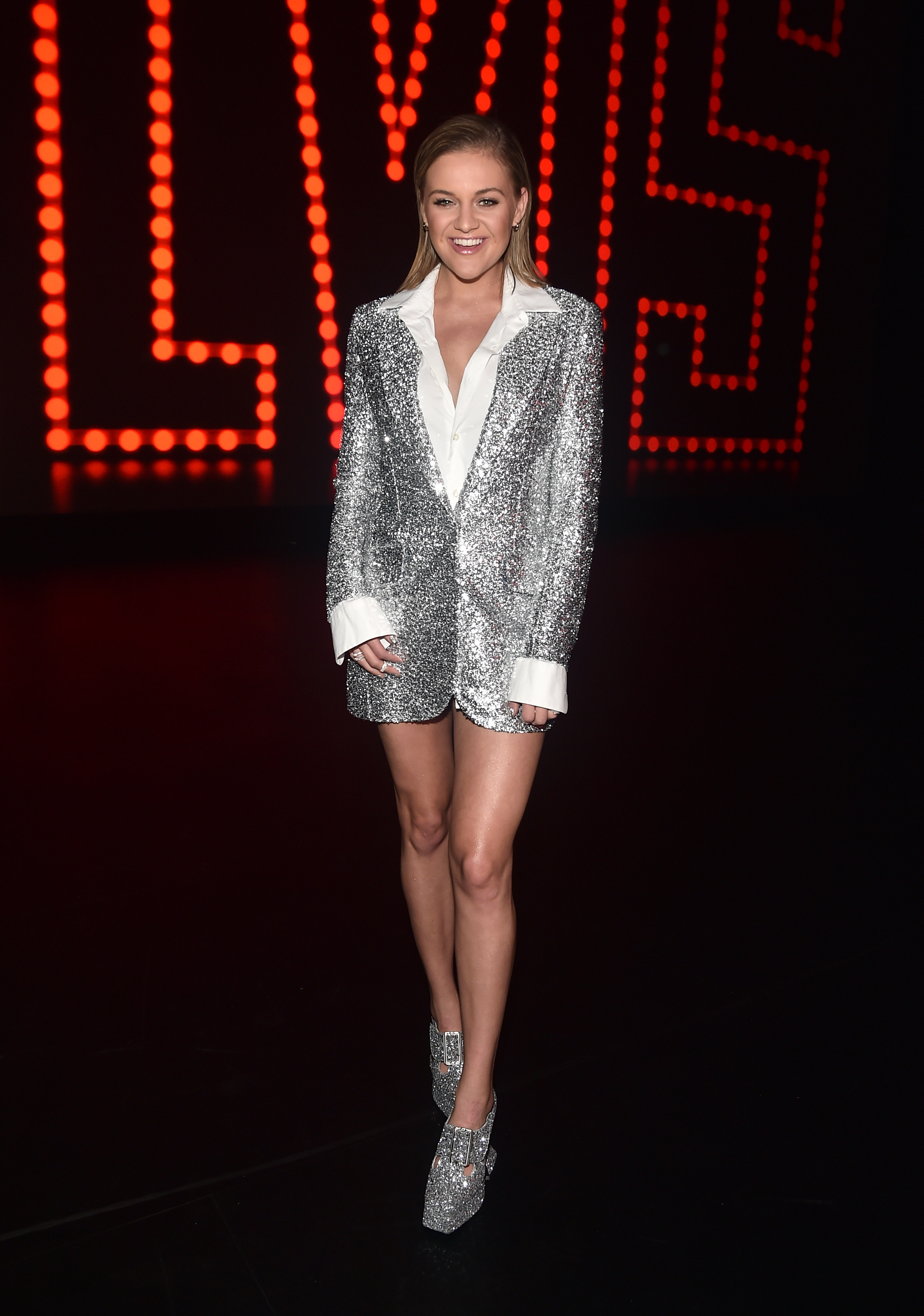 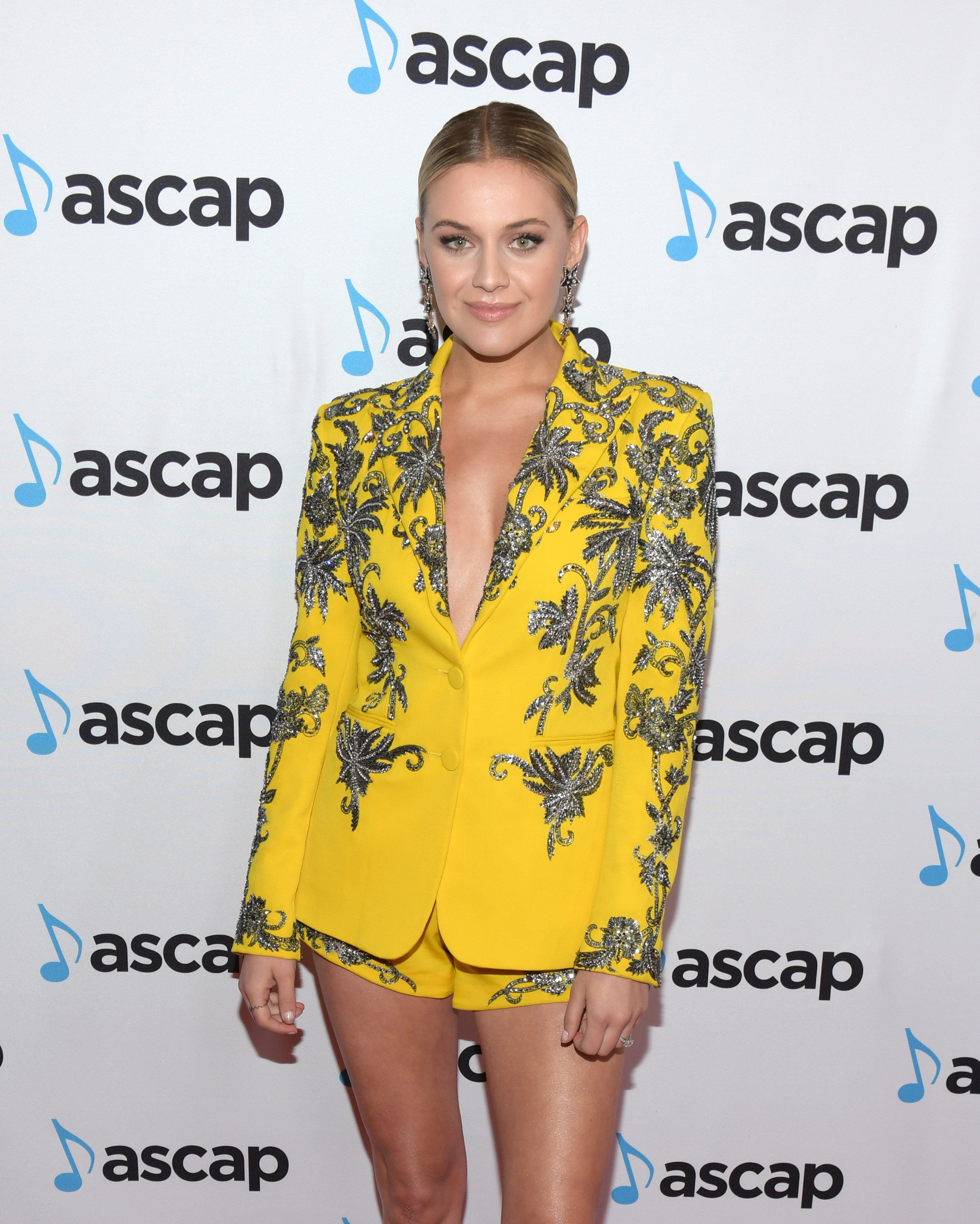 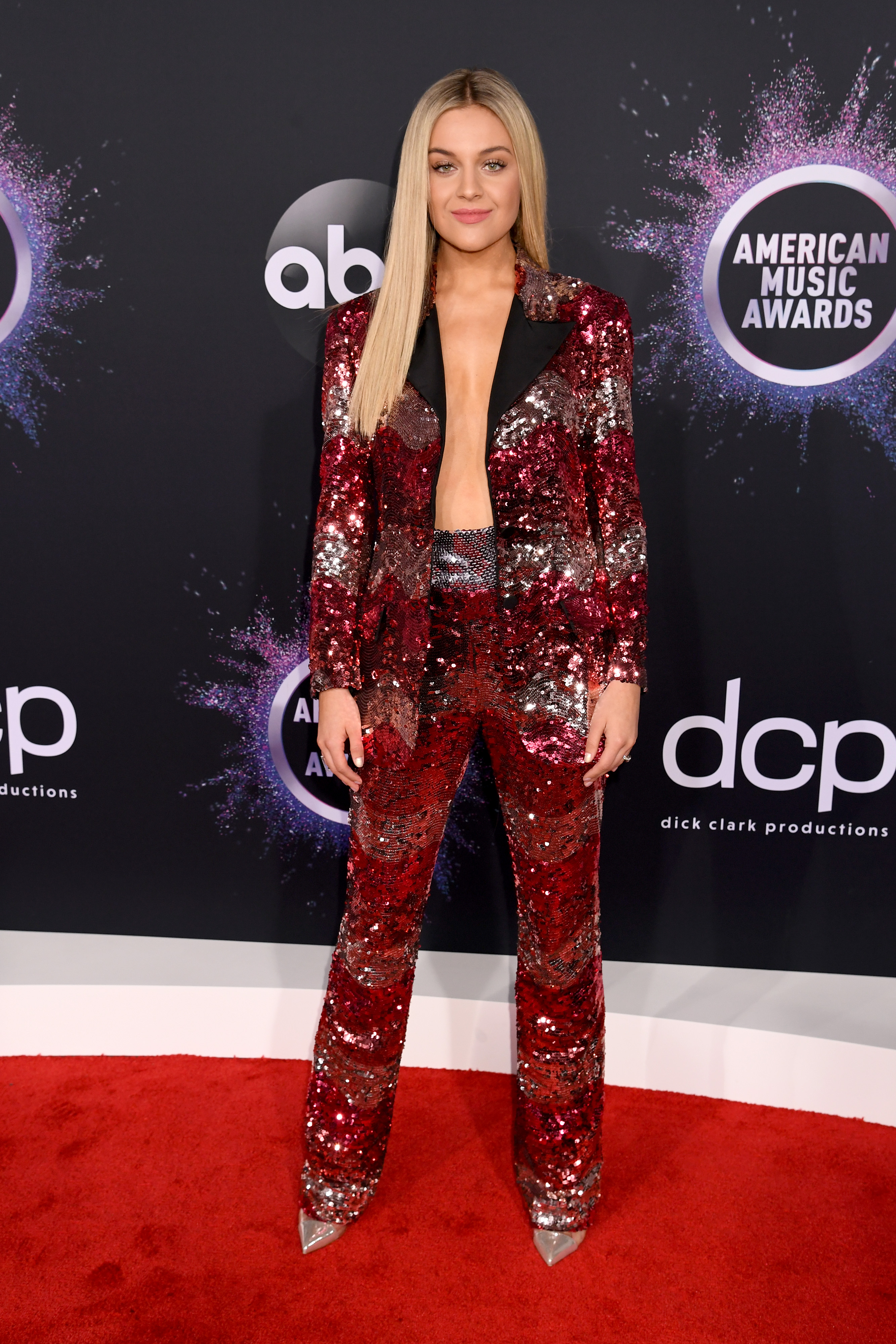 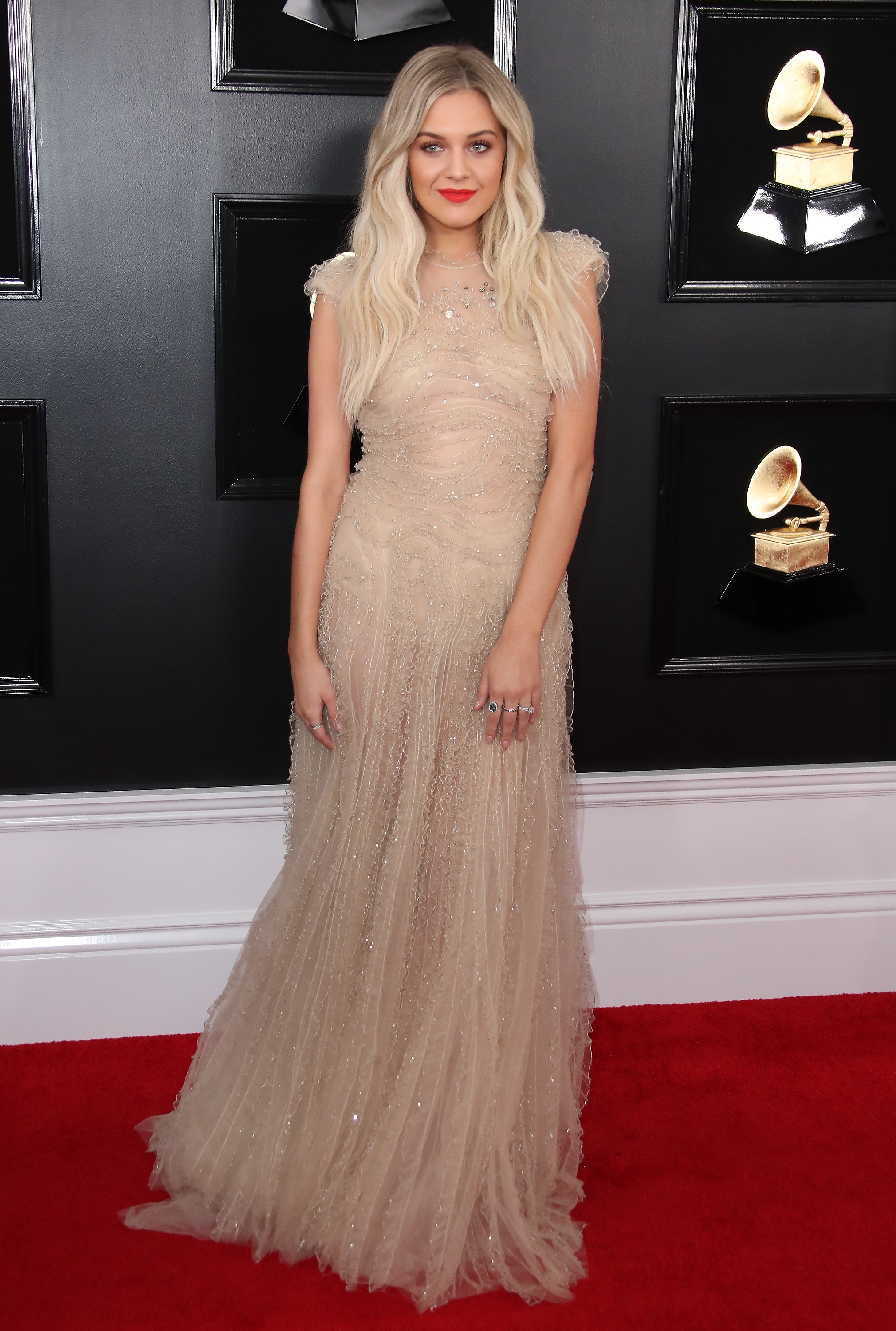 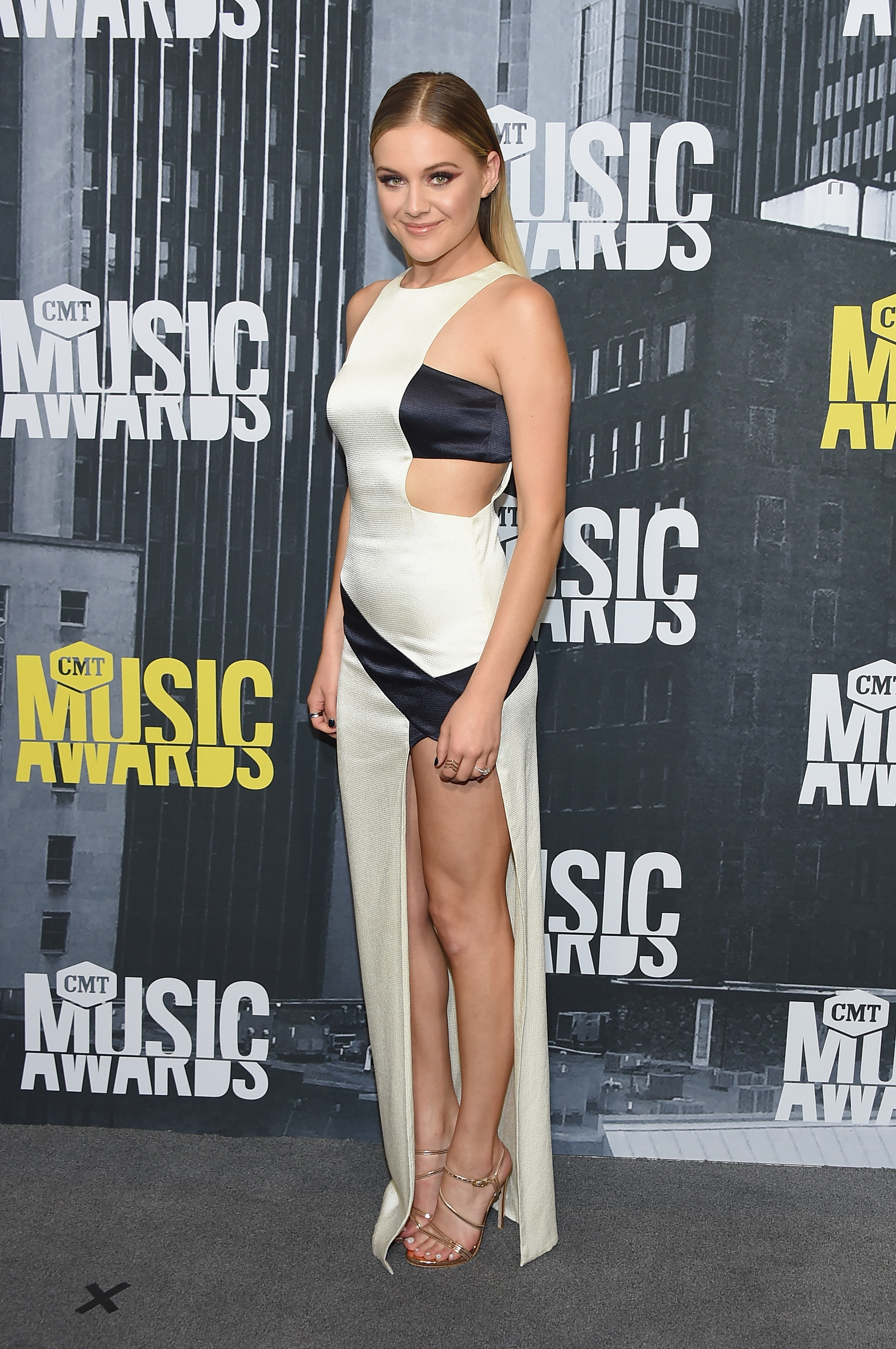 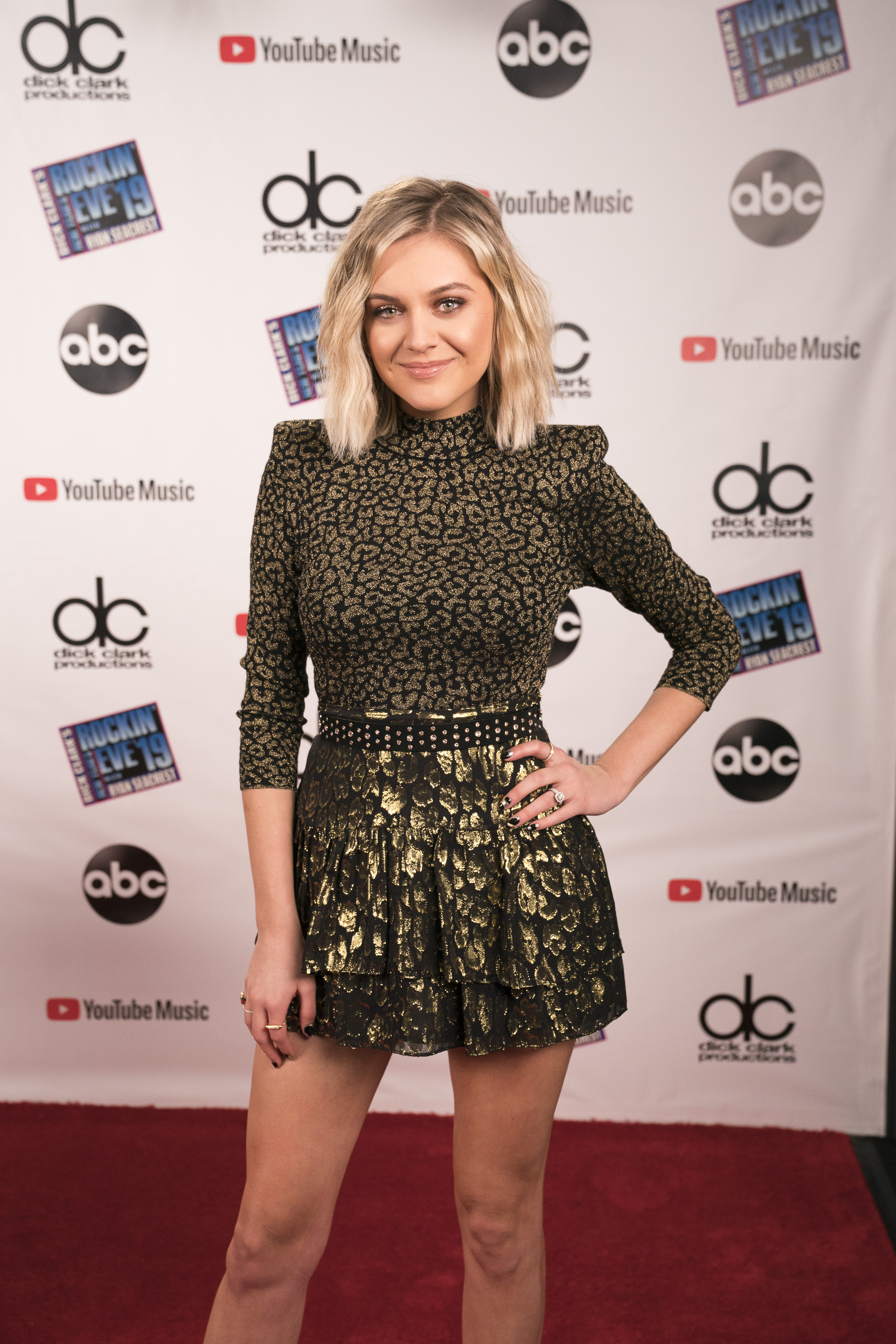 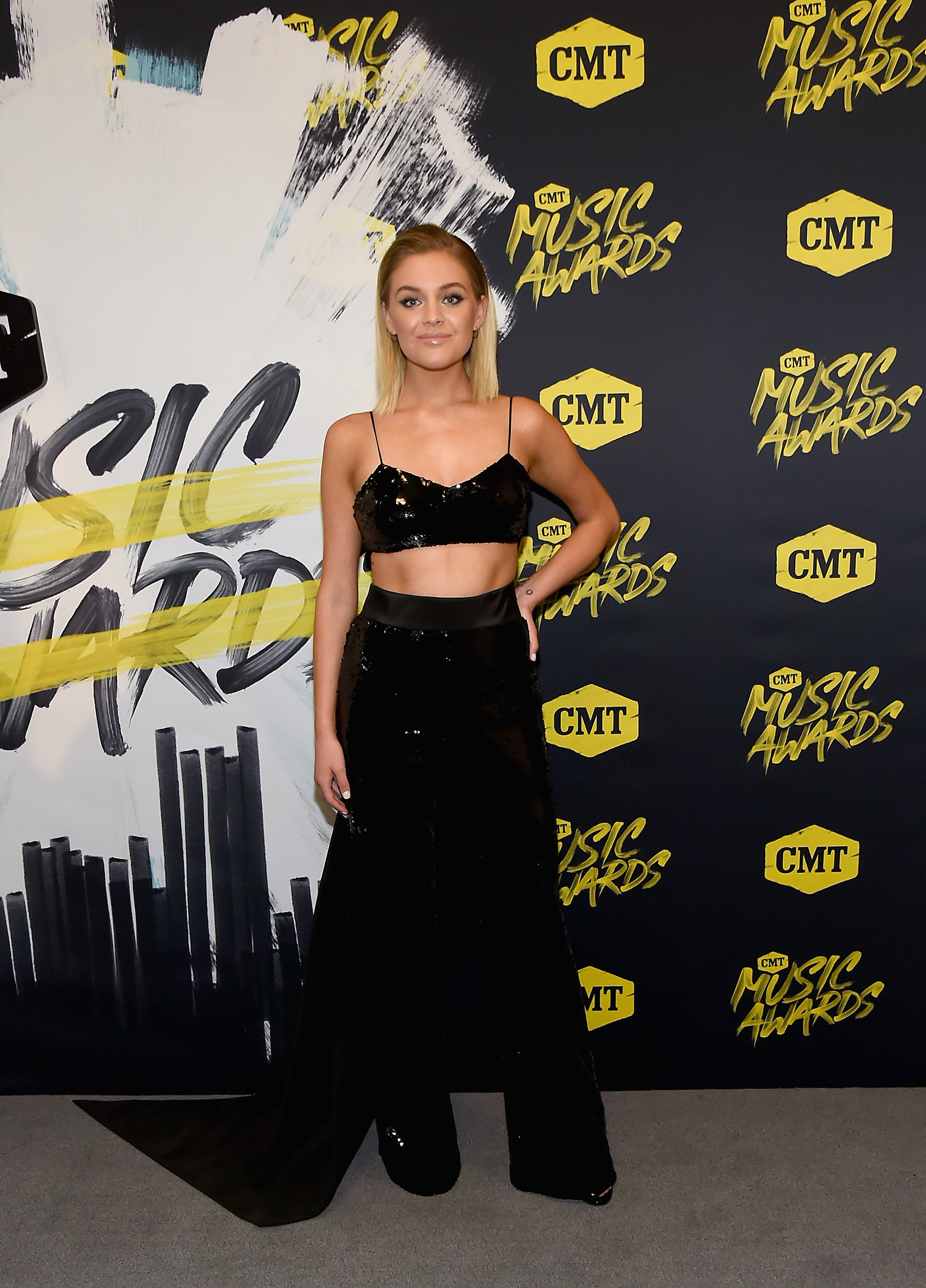 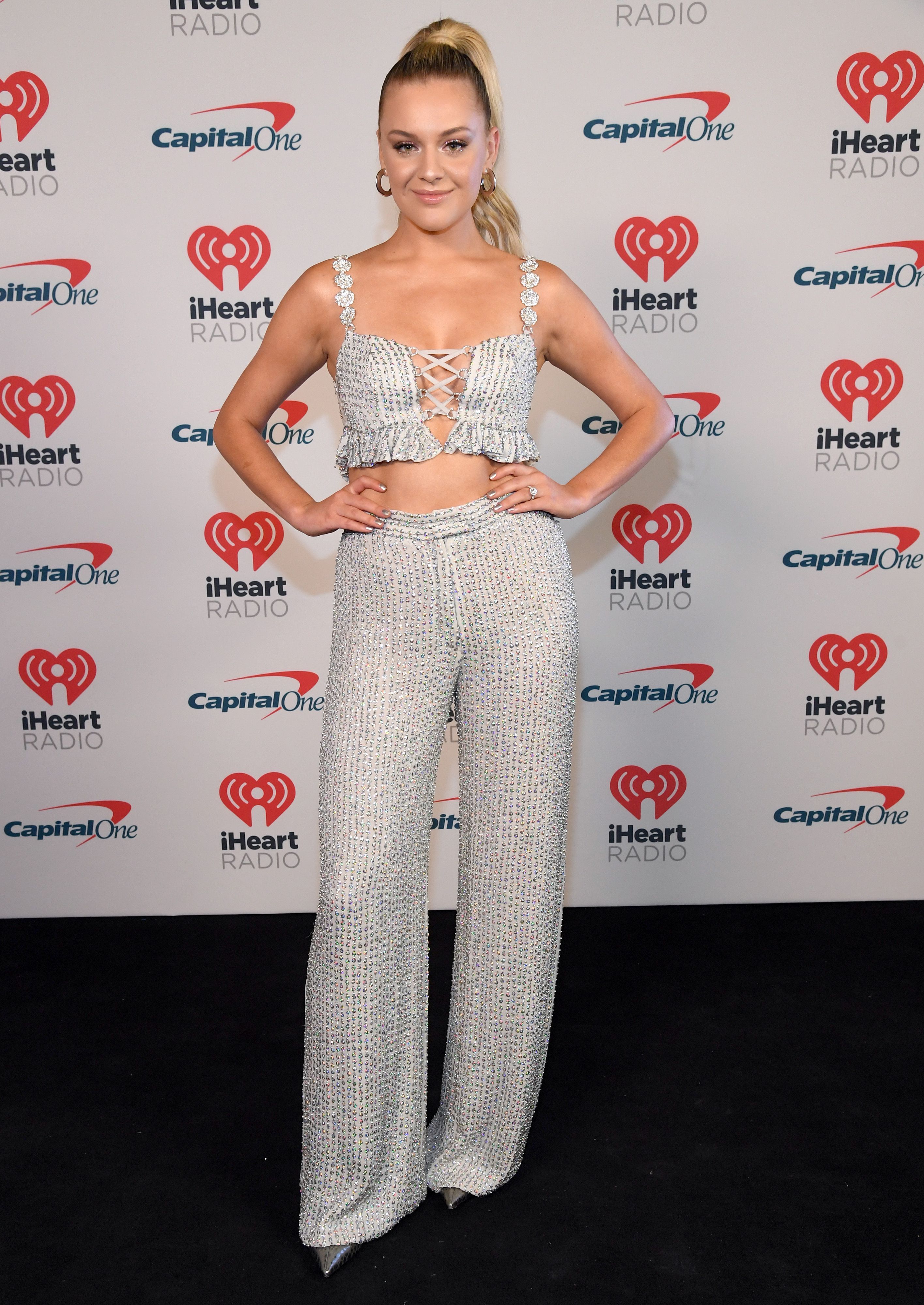 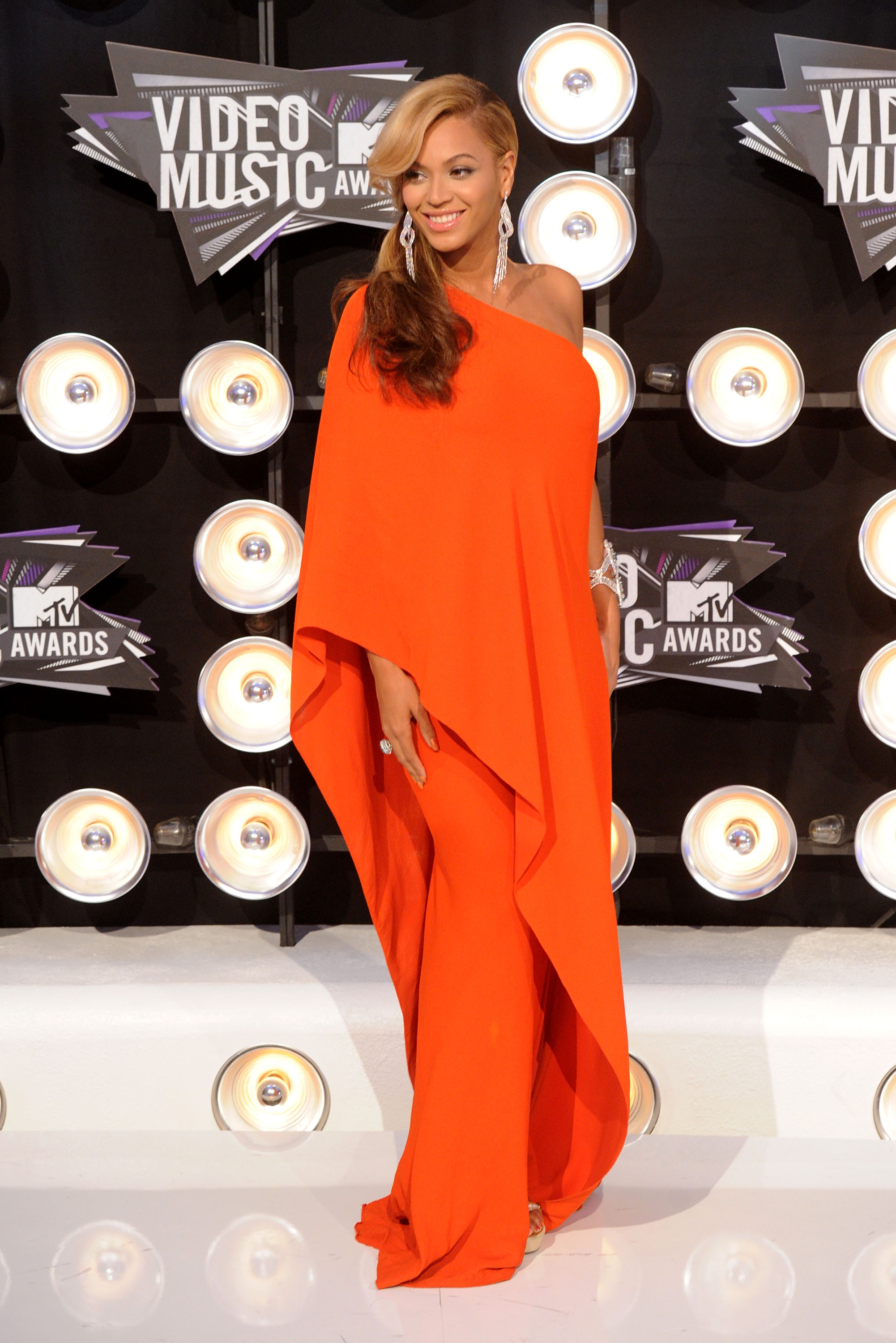