A MAN got more than he bargained for when he sent a seemingly innocent message to a woman on Hinge, only for it to completely backfire.

Posting screenshots to Twitter, a man revealed that he had sent the same message to two different women on the dating app. The issue? The women are housemates. 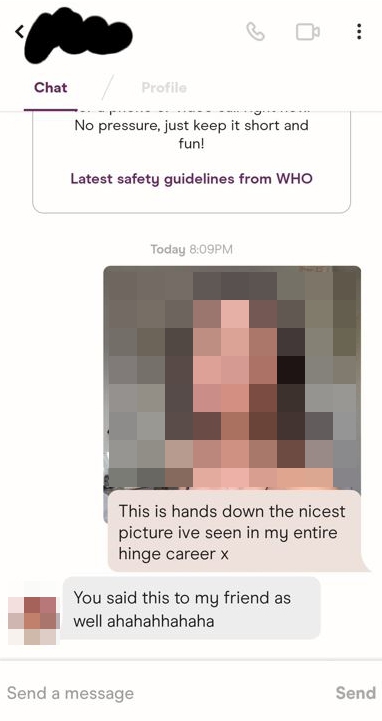 "Probably time I came up with a new opener….your boy's been absolutely rumbled," he said wrote alongside the screenshots.

In one of the photos, you can see that he's messaged the woman a pickup line.

"This is hands down the nicest photo I've seen in my entire Hinge career x," he wrote.

While the message might impress others, it didn't impress this woman as she revealed she had heard it before.

"You said this to my friend as well hahaha," she responded.

In an attempt to get himself out of the sticky situation, the man tried to play it cool, only to put his foot in his mouth even further.

"How did you know I said that to her!? Did it go to your group chat??" he asked.

She responded: "No we live together ahahaha."

The man didn't reveal whether they had exchanged any other messages but conceded that he needed to come up with some more chat up lines to use.

The post has been a hit on Twitter, as at the time of writing it had 40k likes and thousands of retweets.

Some people commenting on the post said they have been in similar situations themselves and others tagged their friends.

"I mean to be fair you can use the same line if every girl just gets nicer and nicer you’re not technically lying. It’s food for thought, I’ll leave it with you!" one person wrote.

"Agh men… Tbf he did say he has a career in Hinge, professionals know what works," said another.

"This has absolutely killed me," a third person commented.

A fourth added: "I've been in that exact situation."

Elsewhere in dating and relationships, girlfriend draws up 17-page ‘contract’ for man she’s been dating TWO WEEKS… including that he pays for everything.

Plus my 40-year-old boyfriend told me he was married with kids when I was six months pregnant… now we’re having a second baby.

And I lay out clean clothes for my man every night & make sure his dinner is always ready, I work full-time, he deserves it.