Ciara is back on the awards show scene after giving birth to son Win in July. The singer slayed in super sexy red gown as she presented at the AMAs.

Ciara came to play at her first major awards show appearance since welcoming son Win Wilson with husband Russell Wilson on July 24. The “Thinkin Bout You” singer had us thinking about her amazing look at the 2020 American Music Awards! The 35-year-old beauty looked radiant while wearing a red gown that featured a plunging top and high slit up the skirt that showed off her thighs and knee-high black boots. The frock featured billowing sleeves and a line of vertical black fabric down the front for a dramatic effect. 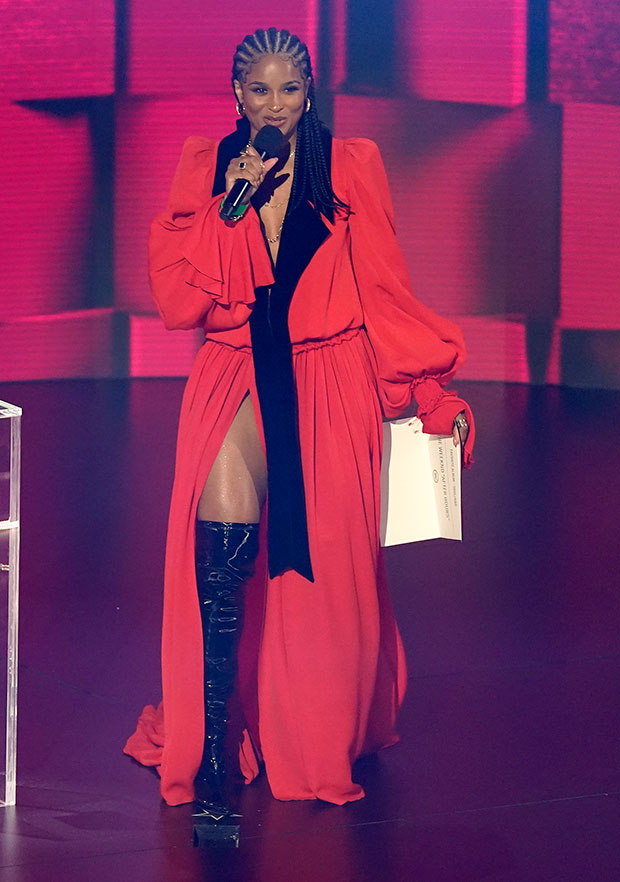 Ciara dyed her long brunette locks a pale blue color on Nov. 12, and had been loving the look via Instagram posts ever since. She still had the shade as of Nov. 18, and she did not stay with the color as she presented at the AMAs on Nov. 22, opting for wearing her locks in dark cornrows. The singer presented Favorite Album for the Soul/R&B category. The Weeknd won, beating out Doja Cat and Summer Walker.

CiCi’s post-baby body looked amazing, and she’s been working hard yet sensibly to drop the pounds. On her Oct. 25 birthday, she told fans she was “35 & 35 more lbs to go…and I feel good! Loving the process and progress!” By that point she had lost 13 pounds after giving birth, and has been letting fans in on her journey to get back to her pre-baby weight.

One month after Win’s arrival, Ciara revealed to fans in an Aug. 24 Instagram post that she was starting a program to lose almost 50 pounds of baby weight. “48lbs to go! Starting the game plan tomorrow!! P.s. don’t know how easy it’s going be considering 3 baby’s now! Going to work really hard at this! Let’s go Mamma’s,” she shared in the caption. In addition to Win, Ciara is the mom to Future Zahir Wilburn, 6, whom she shares with ex Future, and her daughter Sienna Princess Wilson, 3, with Russ.

While CiCi began working out after giving herself a month to recover after Win’s birth, she realized that raising three kids while trying to get her body back was a tough task. On Sept. 24 — two months to the day after Win arrived — the new mom announced that she had become a Weight Watchers ambassador.

“I’ve always appreciated being in shape — I’m ready to get back at it and lose the baby weight,” Ciara said in a statement with WW. “But I’m also very aware that my life is more eventful with three kids, so a restrictive lifestyle doesn’t work for me anymore.”

The “Freak Me” singer said that with her first two pregnancies, she’d been a bit of an “extremist” when it came to shedding the baby weight right away. But that this time around she was welcome to “learning how to make the best choices for a sustainable, healthy lifestyle.” With how great she looked as the AMAs, her mission is paying off!