PERCHED on a wooden bench in the corner of a photo studio in east London, Ashley Roberts is bundled up in a brown aviator jacket, contemplating turning 40. In exactly four months, the Pussycat-Doll-turned-radio-host will reach the milestone of midlife.

“Oh god, girl!” she exclaims. “It’s fine! It’s just… it’s strange. I feel like I’m supposed to feel like an adult, but I don’t know if I necessarily do.” 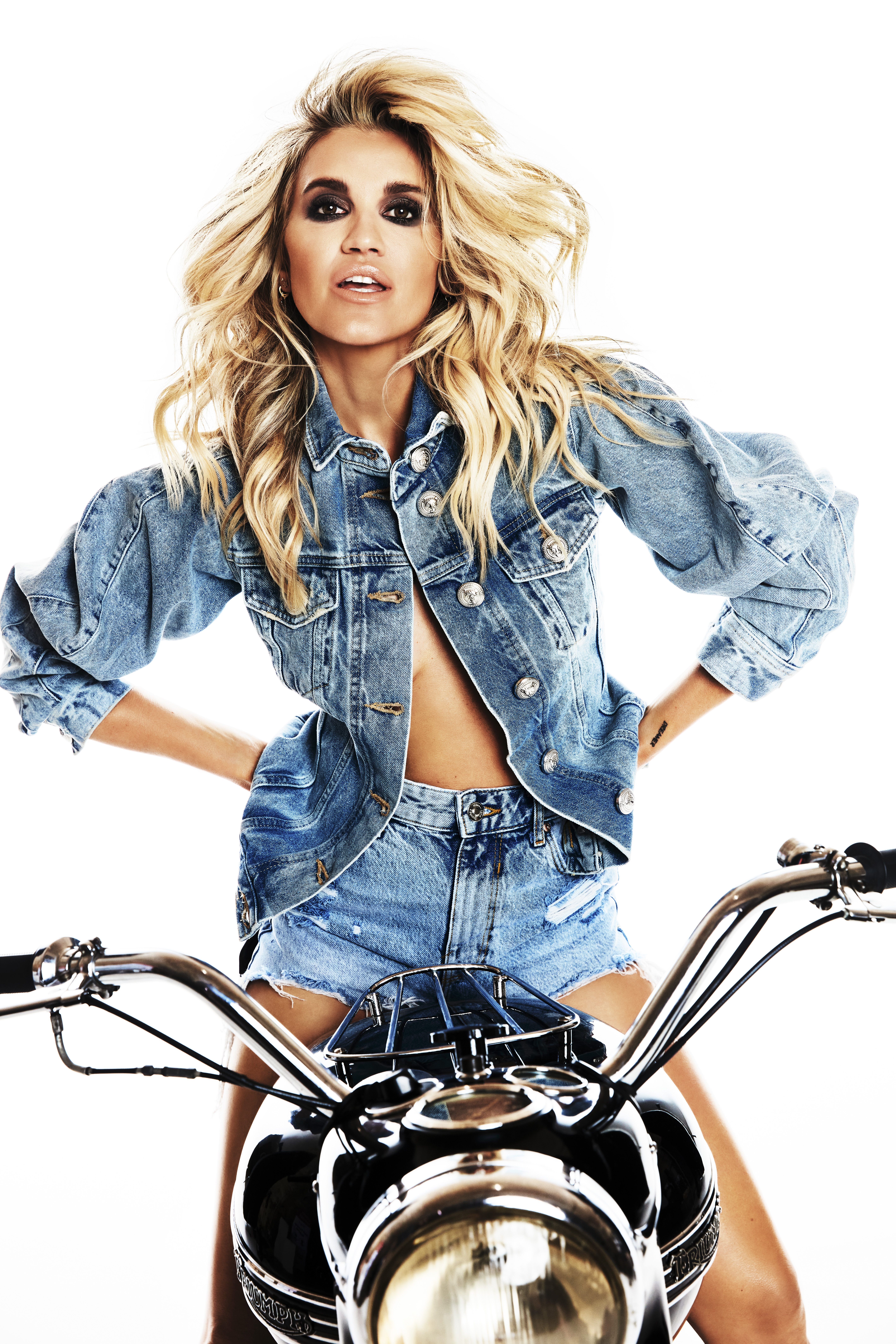 But as most 40-somethings will attest, these days it feels like the new 20.

Quite frankly, Ashley is goals herself. Today, in her racing-car-print white Fiorucci jeans and sky-high red patent heels (“I have trainers in my bag for when I’m done with all of this”), the Phoenix-born singer looks barely a day older than the girl who burst on to the music scene in 2005 with the Pussycat Dolls.

The former burlesque group’s single Don’t Cha was an instant UK No.1 and the girls, including lead singer Nicole Scherzinger and Ashley’s best friend Kimberly Wyatt (who she refers to as her “sister”) became global stars. They toured the world, supported by then up-and-coming musicians Lady Gaga and Rihanna, and their sexually confident brand of pop inspired a raft of future female artists.

Looking back, she says it’s hard to pinpoint her best decade.

“Ooh! You know what? They’ve all been memorable in different ways. In some good ways in some bad ways,” she says, adding that life has, at times, been “a bumpy ride”.

Three years ago, Ashley’s dad Pat, a former drummer in ’60s folk group The Mamas & The Papas, took his own life, aged 68. Meanwhile, her younger brother Jayce, 35, suffers from schizophrenia, diagnosed in his teens, and has had spells both in jail and secure units.

“I feel like I’ve been tested in certain ways of life and can handle it. I think we are more resilient than we realise as human beings,” she says. “I feel stronger, more aware of myself, my body, who I am, what I want, and I think that’s a glorious thing about age. It allows you  to figure that out.” 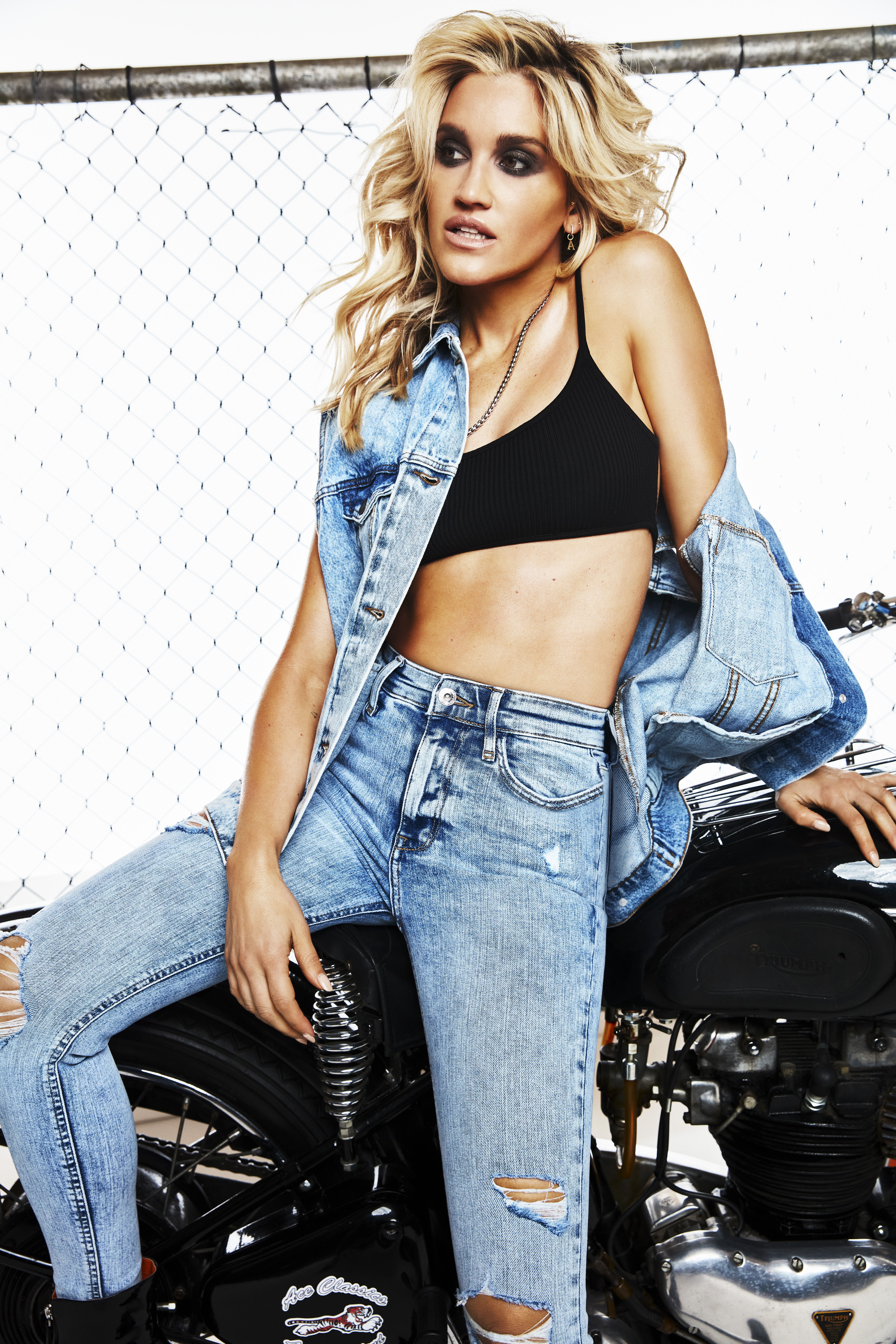 What about herself does she still need to learn?

“Ooh, she’s goin’ in!” whoops Ashley, repositioning herself on the bench and then momentarily searching the ceiling for an answer.

“I wouldn’t say it’s a learning thing. It’s just something new that would be nice to have,” she says. “I’ve been really good at being driven and taking care of myself, and I would like for someone to come in and support me. Not financially, and not that I need a man to take care of me, but I would like to share my life with someone whose company I enjoy and who supports me.

“But, then again, I’m really good on my own. So this is the thing, it’s finding someone to go on adventures with. I want to experience the world with someone that makes me laugh, but who also has the emotional intelligence to have an interesting conversation.”

And – presumably – someone who doesn’t stifle her independence?

“Amen,” she says, with a nod of her head. “That’s it! It’s about finding a man that is welcoming to that independence, because I value that.”

That’s it! It’s about finding a man that is welcoming to that independence, because I value that.

Over the years, Ashley has been linked to everyone from Prince Harry to Joey Essex – all speculation, she has previously insisted. What was very real, though, was her relationship with Strictly Come Dancing professional Giovanni Pernice, 30, who she began dating after the end of the 2018 series, which she competed in.

For a year, they seemed blissfully loved-up, but last January via social media, Giovanni announced they were over and pledged their intention to “remain friends”, although neither have spoken publicly about each other since.

“For me, I know what works and that’s really standing true in what I want, holding those boundaries and moving forward from there,” she says.

For a single girl looking for love, moving forward during a global pandemic sounds kind of tricky.

“Er, it’s been interesting!” she says. “My friend one day was like: ‘Have you checked your DMs?’ I don’t really do that normally, but it was interesting. There’s been a wide spectrum of characters popping in there and normally I wouldn’t even be open to something like that, but because we’re not able to go out and socialise, I was trying to be open to new ways but… Let’s just say I’m excited to meet people in real life! I enjoy that chemistry and that connection. You can’t beat that. I’m excited to get dressed up, feel cute, get out there.

“The globe is having a pandemic, but I would be lying if I didn’t say that I wanted to be out there in the world and meeting people and socialising and wishing it wasn’t this way.” 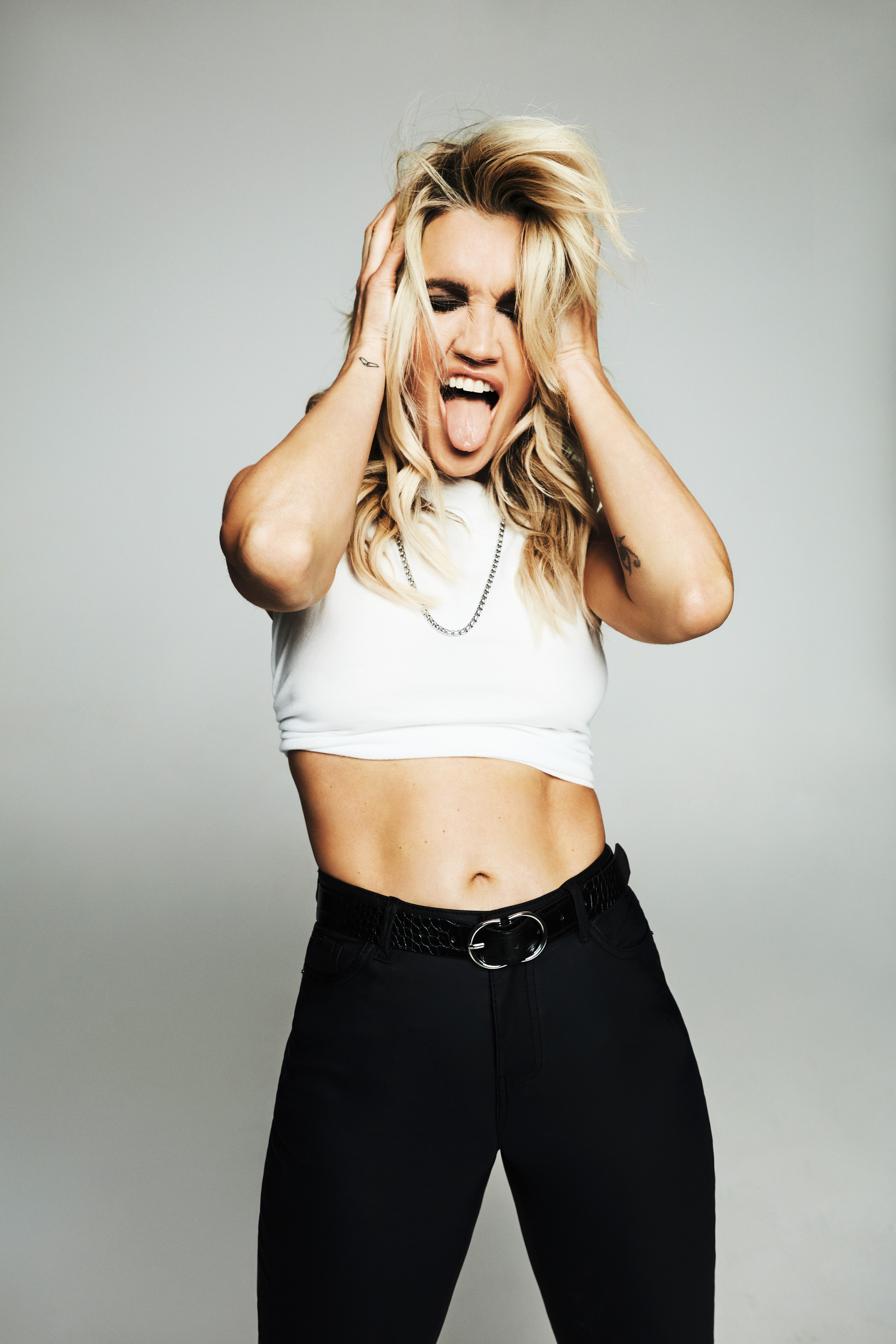 Last year, she spoke about a failed attempt to freeze her eggs a few years prior, in a bid to preserve her fertility, but there are no plans to repeat the process.

“I’m just gonna let nature take its course and whatever is meant to be, will be. If I do meet someone and I want to try, then we will, but I’m also open to other options and I think the ultimate goal is just to be happy.”

Living alone during the “rollercoaster ride” of lockdown was, she says, “challenging” at times, but seeing family members endure mental health struggles means she’s careful to look after herself. She credits her “tribe of people”, books, podcasts and – at the top of the list – exercise, for helping her stay on top of emotional wellbeing.

She bought a spin bike, practised yoga regularly and ran up and down her apartment building staircase “just to get some cardio”. More recently, since restrictions eased, she has taken up one-on-one boxing sessions.

“We’ve just added kicking. I don’t know what I really look like in real life, but in my head I feel like I’m a Power Ranger,” she says. “I love boxing. It’s so empowering. I’m in a more balanced state if I’m doing a bit of fitness.”

Since the PCDs disbanded in 2010, Ashley has scaled solo success with relative ease and is now settled in the UK, where broadcasting bosses adore her. 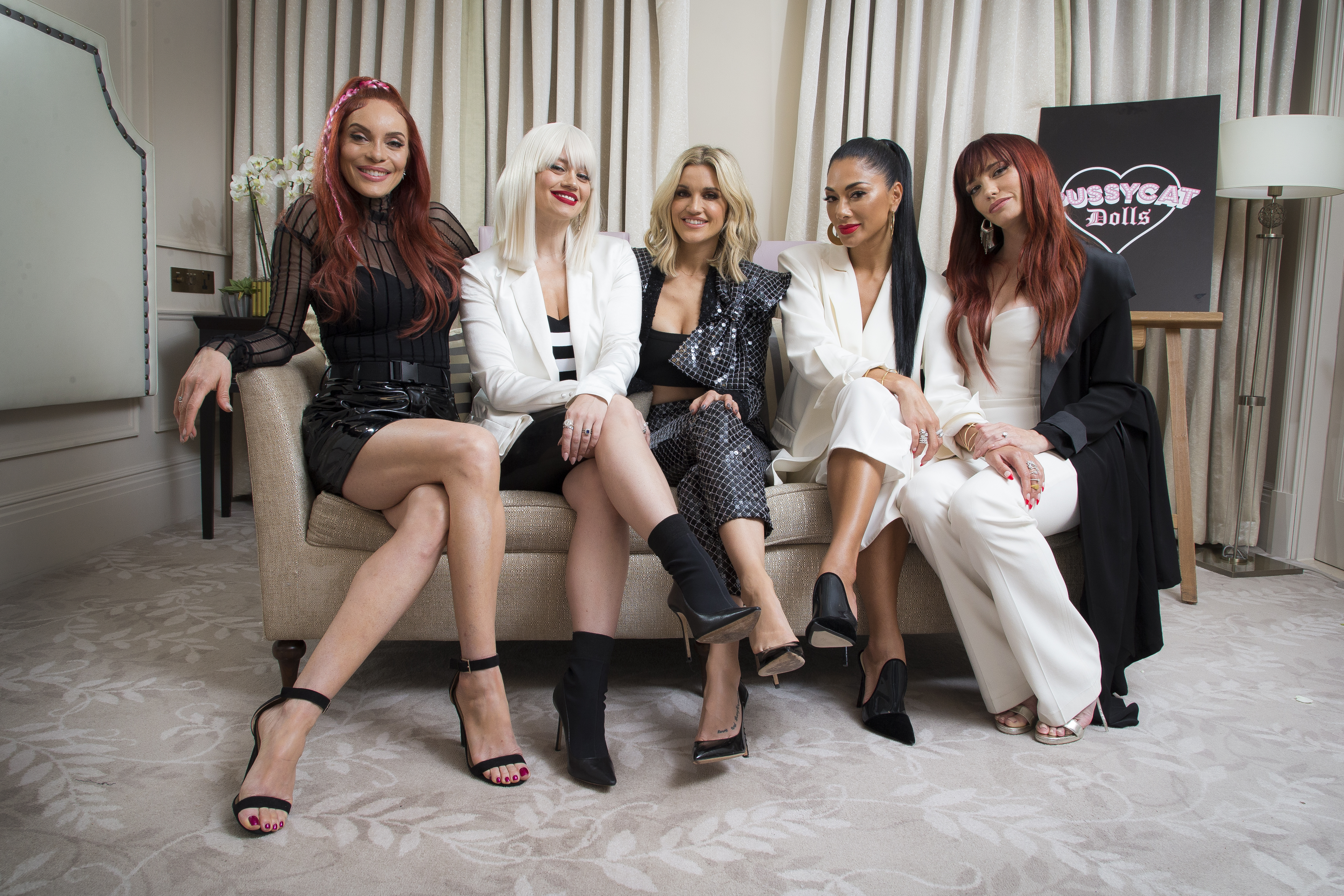 Nine years ago she finished second on I’m A Celebrity… Get Me Out Of Here!, which led to a co-hosting job on Ant & Dec’s Saturday Night Takeaway and a two-season-long judging stint on Dancing On Ice.

After competing on winter sports show The Jump, Ashley became one of the standout contestants on Strictly  three years later. She has since starred in a West End run of the Waitress musical and currently presents showbiz news on the Heart FM Breakfast show, alongside hosts Jamie Theakston and Amanda Holden, who she affectionately dubs her “Heart fam”.

The job at Heart has been another lockdown leveller and more than once Ashley describes Jamie and Amanda as being her “saving grace”, particularly with her beloved mum, former Pilates teacher Peggy Lorraine, 68, on the other side of the world.

“It’s been about a year and a half now, which is the longest we’ve ever gone [without seeing each other] and I miss her like crazy, but she’s been double-vaccinated, so hopefully by late summer we’ll be able to plan a trip. Travelling, for me, is what lights my soul up, to go places, to be in the sun.”

While Ashley enjoys a tight bond with Kimberly Wyatt, who also lives in the UK – the pair have recently teamed up to promote low-calorie drink Take Five Hard Seltzer – it’s not immediately obvious if she is similarly close to her other band mates Nicole, Carmit Bachar and Jessica Sutta. 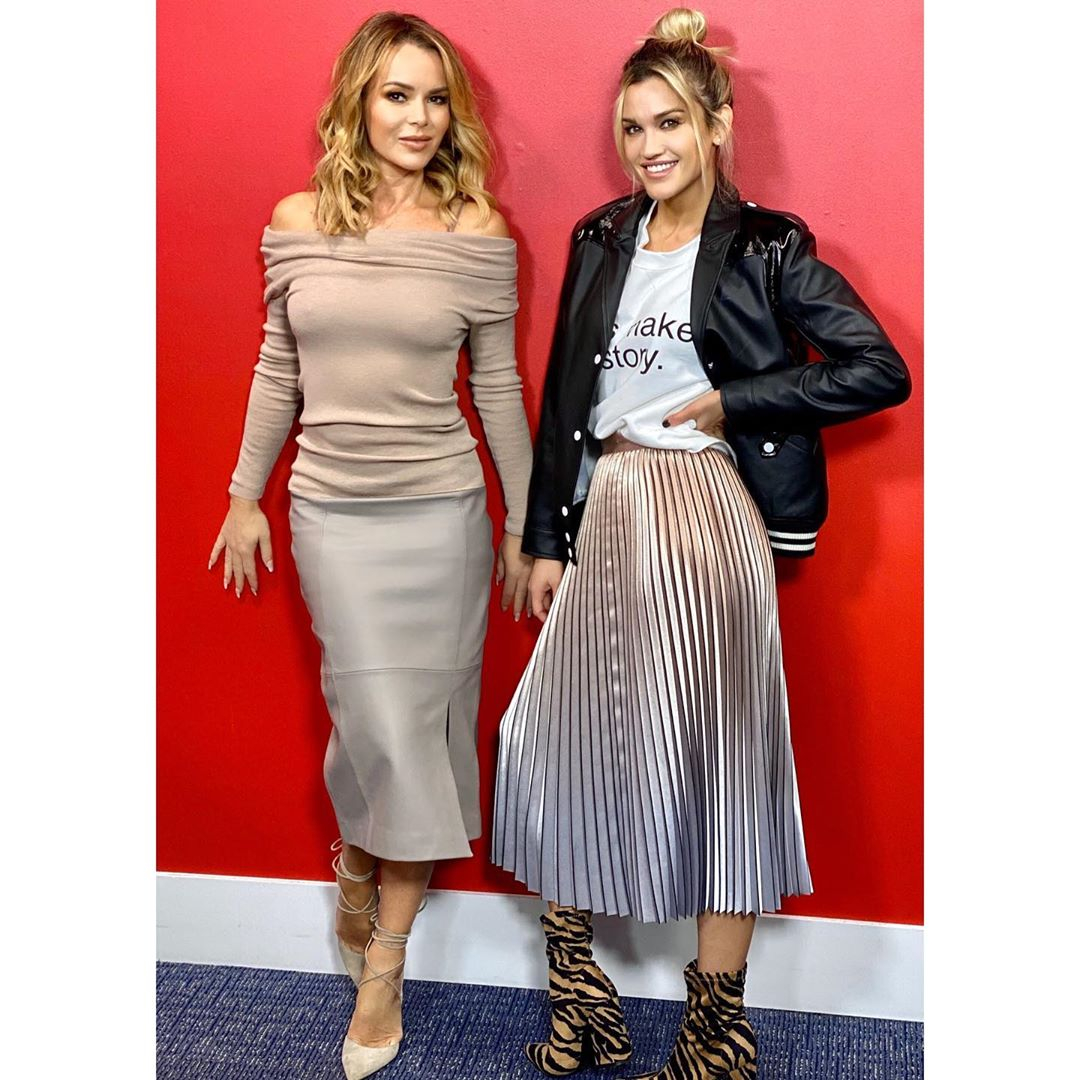 She says they “check in with each other” via WhatsApp, “depending on what’s going on in life”. With no assurances of when indoor mass gatherings will return, The Dolls’ eagerly awaited reunion tour – announced in November 2019, days before performing all together for the first time in a decade on The X Factor – still hangs in the balance.

When the group split, behind-the-scenes tension was no secret, but the reunion proves the healing power of time and, says Ashley, personal growth.

“It took 10 years to really get us back together because that’s what we all needed, you know? I think we’re all grown up now. We’re women. People have got kids now, they’re married, people have lost family members and have been recovering alcoholics. Life has gone on, so we’re different now.”

In light of this, will after-parties on the Dolls’ eventual tour be more of a cuppa and chocolate digestive situation, rather than a crazy all-night cocktail fest?

“Not for me, honey!” laughs Ashley. “Maybe for some of the other señoritas – but not for me!”

If the pandemic has taught us anything, it’s to embrace the moment and live a little, so it’s refreshing that Ashley doesn’t try to disguise her penchant for the occasional boozy night out. She and Amanda Holden share a love for Aperol Spritz and she describes getting “tipsy me-gripsy” during lockdown on a Zoom wine-tasting session with pals.

Unable to get dressed up and go out in lockdown, Ashley made Heart her “dress-up runway show”, wearing those catwalk-worthy outfits every morning to the central London studios.

“That was a gift during the pandemic, because I could actually wear clothes.  I was like: ‘I’m gonna get dressed up because that makes me feel good, to put on some colourful outfits.’ I really like the fact that you put on a different piece [from] your wardrobe and it brings out a different part of your personality.”

Ashley’s stylist Thomas George Wulbern regularly sends her boxes of clothing and they create a rail of pre-planned outfits for every month, which she works through day-by-day. Apparently, her stylish London home resembles one giant walk-in wardrobe. Which pretty much sounds like the dream to us. 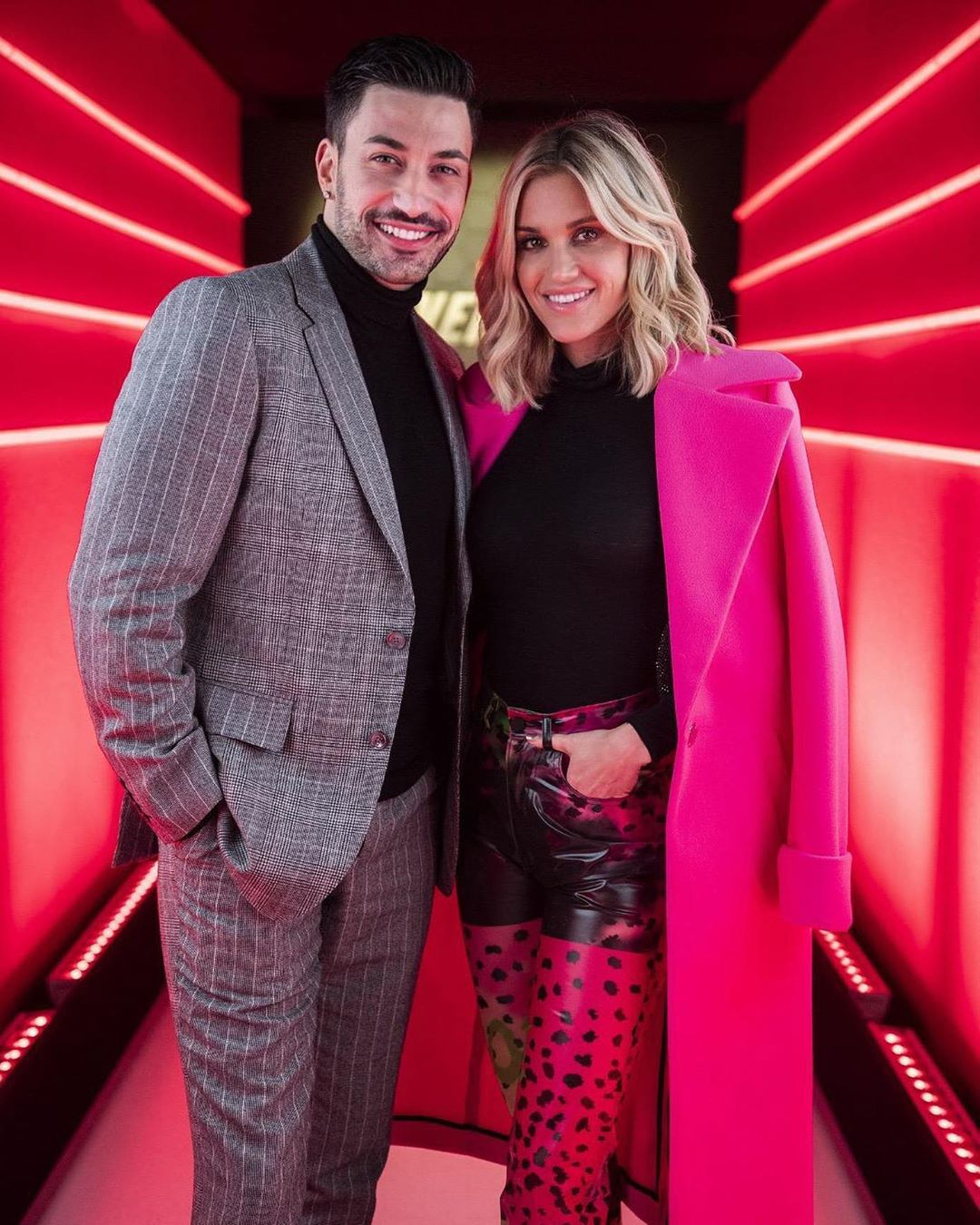 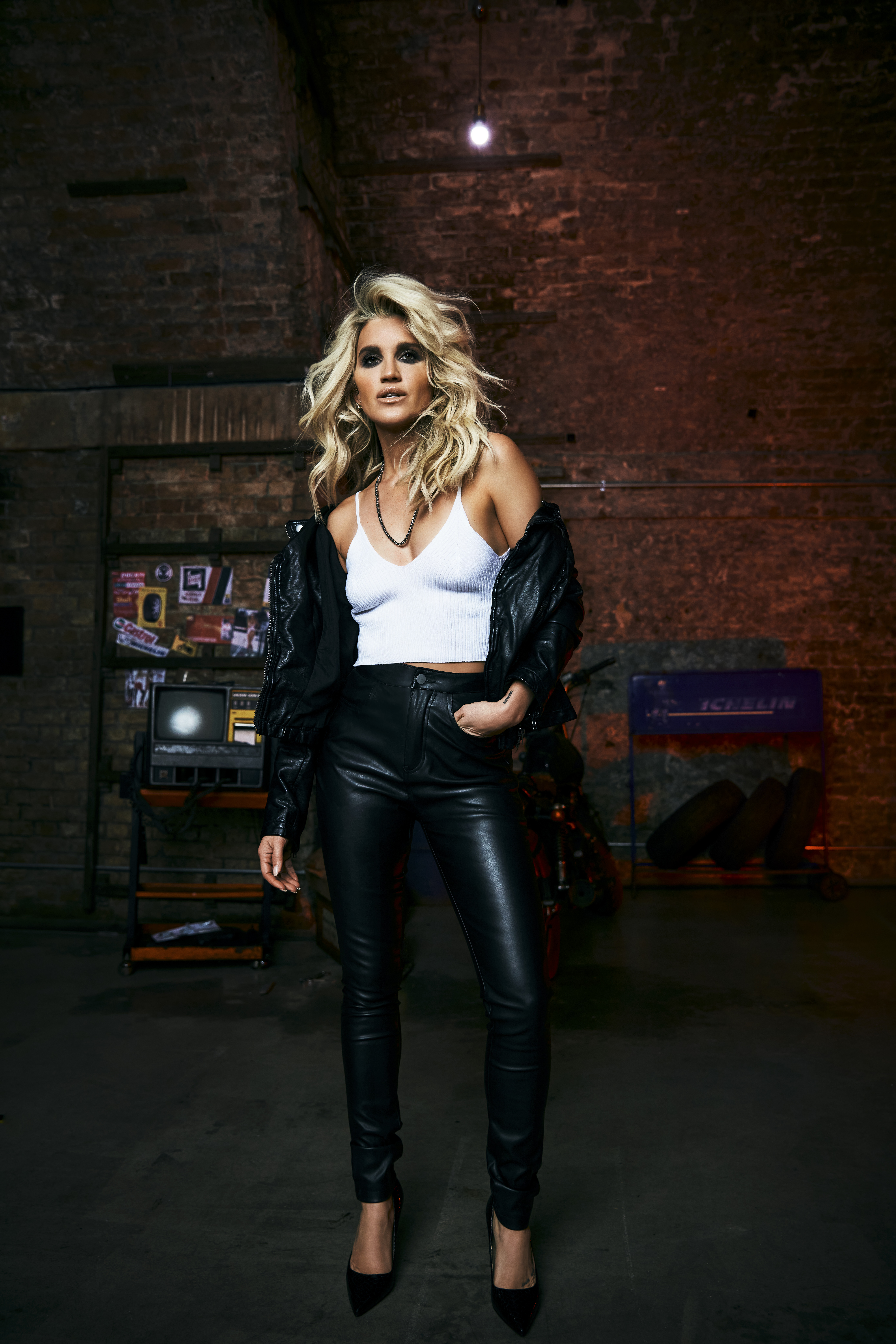 “I don’t think anybody else could fit in, even if I wanted them to! It’s so fun. Listen, I’m single. I don’t have kids. This is something that makes me happy,” says Ashley, adding that she and  Amanda occasionally rock up to work in fashion sync, either in matching styles or complementary colours.

“It’s so refreshing to walk into a workspace and be around people whose company you really enjoy. We have fun with it. We don’t take ourselves too seriously. We’re just being goofballs and it’s so nice to have that. Amanda’s got this balance of being silly and fun and sassy but is [still] so thoughtful and warm-hearted and caring.”

Ashley could easily be describing herself. While she maintains a very American style of showbiz professionalism during our interview, she is also very giving, giddy and frequently hilarious. Multimillion-pound-record-selling artist, TV star and, now, popular broadcaster – she’s a woman of many talents.

“I’ve been pretty grateful for the experiences I’ve had and I’m more excited about what is ahead that I don’t even know about,” she says.

In the make-up chair with Ashley

What are your skincare heroes?

The Body Shop Shea Body Butter is my favourite.

What are your make-up bag essentials?

How do you care for your hair?

I have it bleached, so Olaplex products are a must. I also use Larry King Hair Care A Social Life for Your Hair, but I don’t wash it every day.

Hailey Bieber is effortlessly cool, and her skin is gorgeous.

So, pandemic permitting, how will she mark that impending 40th?

“I don’t usually celebrate my birthday – I’ll have dinner with close friends, that’s kind of it. But, if I can, if the pandemic allows, then I am planning on having a fun soirée. I’m going to embrace it.”