A NEW ITV show gives an insight to some of the country’s largest families and their bulging budgets.

Britain’s Biggest Families: 31 Kids And Counting The Pennies hits TV screens this Thursday, and the show follows three families – the Sullivans, Suttons and the Seymours – as it gives you a glimpse into the chaos that goes on behind closes doors.

You can expect to see eye-watering amounts of money being spent on some of the largest broods in the country, as the Sullivans spend around four times the amount of the average weekly food shop of £80.

Nicole and Joseph Sutton and their 11 children fork out to £200-a-week on their food budget, Ben and Zoe Sullivan and their 11 offspring spend £300, while Fran and Layden Seymour and their brood of nine have no limit.

No limit – that could strike fear into anyone’s heart. 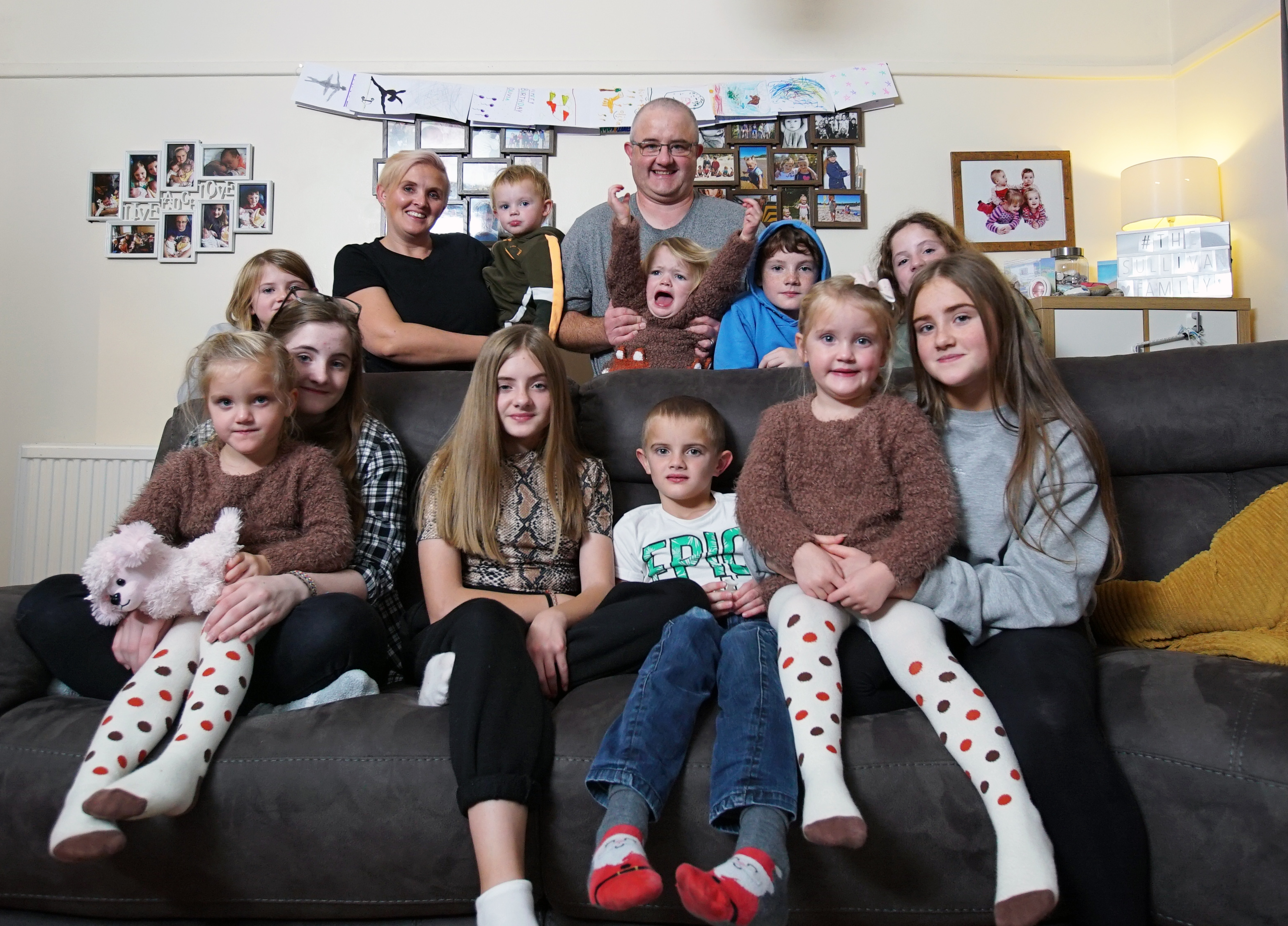 The Sullivans – Spend half their income on food shop

With 11 highly energetic children, Ben and Zoe are all guns blazing from the crack of dawn to get their brood organised.

The family live in Lossiemouth, Scotland and comprise of Elizabeth, 15, Olivia, 13, twins Isabelle and Charlotte, 12, Noah, 10, Eva, eight and twins Leah and Erin, four, three-year-old Agnes May and Joseph, two.

Eva revealed to The Mirror: “Life in a big family is fun, but pretty crazy and noisy.”

Charlotte agreed: “It’s never too quiet. That’s a bad thing if it’s quiet, it means one of the little ones has escaped or something.”

A typical day for the Sullivans starts early with Ben and Zoe rising at 5am to begin their almost never-ending routine of making breakfast, teeth-brushing and whisking the children off to school and nursery.

Ben’s job as an RAF aircraft engineer takes him out of the house early, meaning mum Zoe is charge of getting the band ready for school.

Relying on an income of around £600 a week, they spend approximately £300 a week on food.

Ben joked that their house was like a Travelodge – full of copious amounts of cereal.

“The milk we get through, we need our own cow!” said Zoe.

The couple make sure they factor in big spends to their yearly budget, saving up to at least £3,000 for Christmas – which is three times the average spend.

But as ever, Zoe believes it’s all worth it in the end, just to see their faces light us.

Oh – and Zoe wants another baby.

The Suttons – 'Supermum' is a savvy saver

Next, we have Cumbria-based family the Suttons – who also have an extensive pack.

Nicole revealed that the family get by on husband Joseph’s paycheck, which comes to a total of £400 a week.

Now that is stellar saving.

Nicole credits staying on top of the weekly shop as she goes as the reason for her affordable budget.

She said: “If something is twice the price it normally is, I’m not buying it. Meals depend on what food is on offer.”

But when it comes to the weekend, the roles reverse as Nicole heads out to her job at a chocolate shop in Keswick – which allows her to put £95 per shift into a present kitty, whether it’s birthdays or Christmas.

The Seymours – Living with a lavish limitless budget

And lastly, but by no means least we have the Suffolk-based Seymours – a couple of business owners with a gang of nine kids.

These parents will never scrimp on anything, revealing that their weekly budget is limitless.

Layden boasts an impressive Rolex watch collection worth £70,000, saying: “We work hard to give our children some luxuries in life. We are not ones to analyse what we need, but it’s a phenomenal amount of money, so I prefer not to think about it.”

The couple shower their kids with everything they need, forking out over £30,000 on tech for the whole family.

But the couple weren’t always so lucky and haven’t forgotten their humble roots.

At one point during hard times the family were forced to live in a friend’s caravan.

He revealed that during the worst of times they couldn’t afford to feed the whole family, so Fran and he went without.

They opened a play centre business which left just pennies in their account, but thankfully it changed their luck.

For Fran’s birthday, after she’s done five washes and three dishwasher loads before lunch, Layden splurges £2,300 on a helicopter ride and a couple’s massage.

There’s no time for rest in the Seymour house – as mum and dad know.

Taylor, left to babysit her siblings, said: “If I had to do this every day I’d be exhausted. I can appreciate why they need a break.”

But the parents agreed that they wouldn’t have had it any other way, and that everything they’ve been through has been worth it.

Because without the large brood everything would be boring.

Check out Katie Price's revelation of the name of the baby she and Carl Woods will being trying for through IVF.

And about this mum-of-16 is giving birth AGAIN, whose nurses joke they see her 'every year'.

18 Best Fall Jackets Under $100 That Are Lightweight & Totally Versatile