THIS lot could put even the most dedicated plastic surgery fan to shame.

Yesterday, we told how Katie Price has labelled herself a “surgery veteran” after she had five procedures in a Turkish hospital. 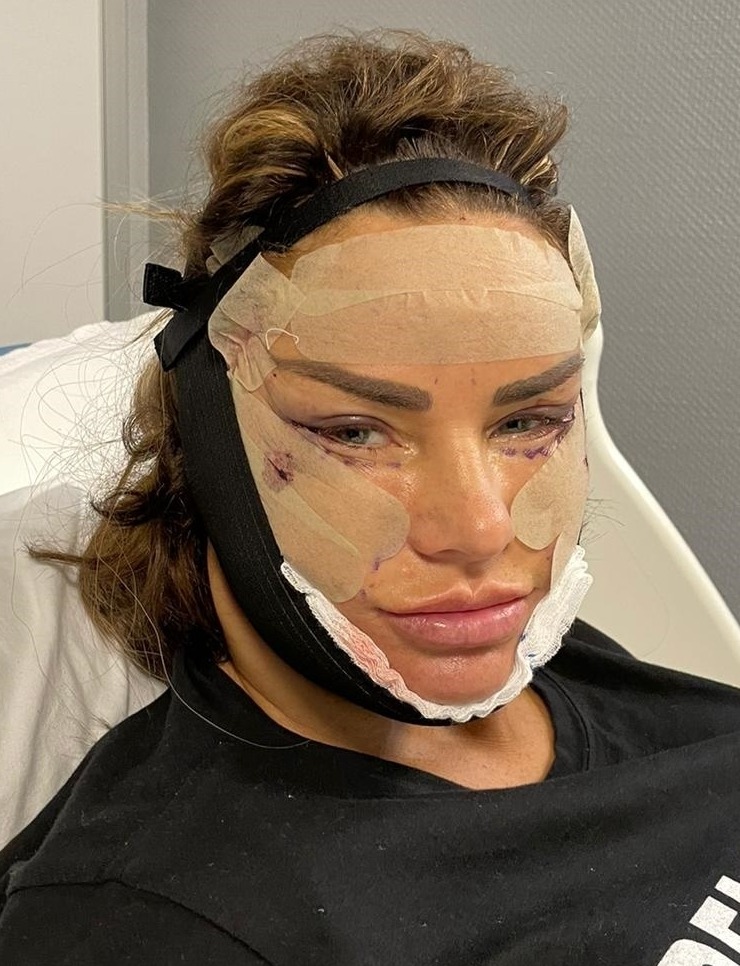 Surgery fan Katie, 43, has gone under the knife for three facelifts but told how she’s lost track of the number of boob jobs she’s had – thought to be around 12.

She told how she opted for more cosmetic surgeries after piling on two stone in lockdown.

She said: “I was terrified of looking like a freak, like that Bride of Wildenstein or a fake doll.

"I've woken up with holes and stitches all over my body. I look like I've got cat's whiskers coming out of my nose and eyes. But I just want the old Katie back!" 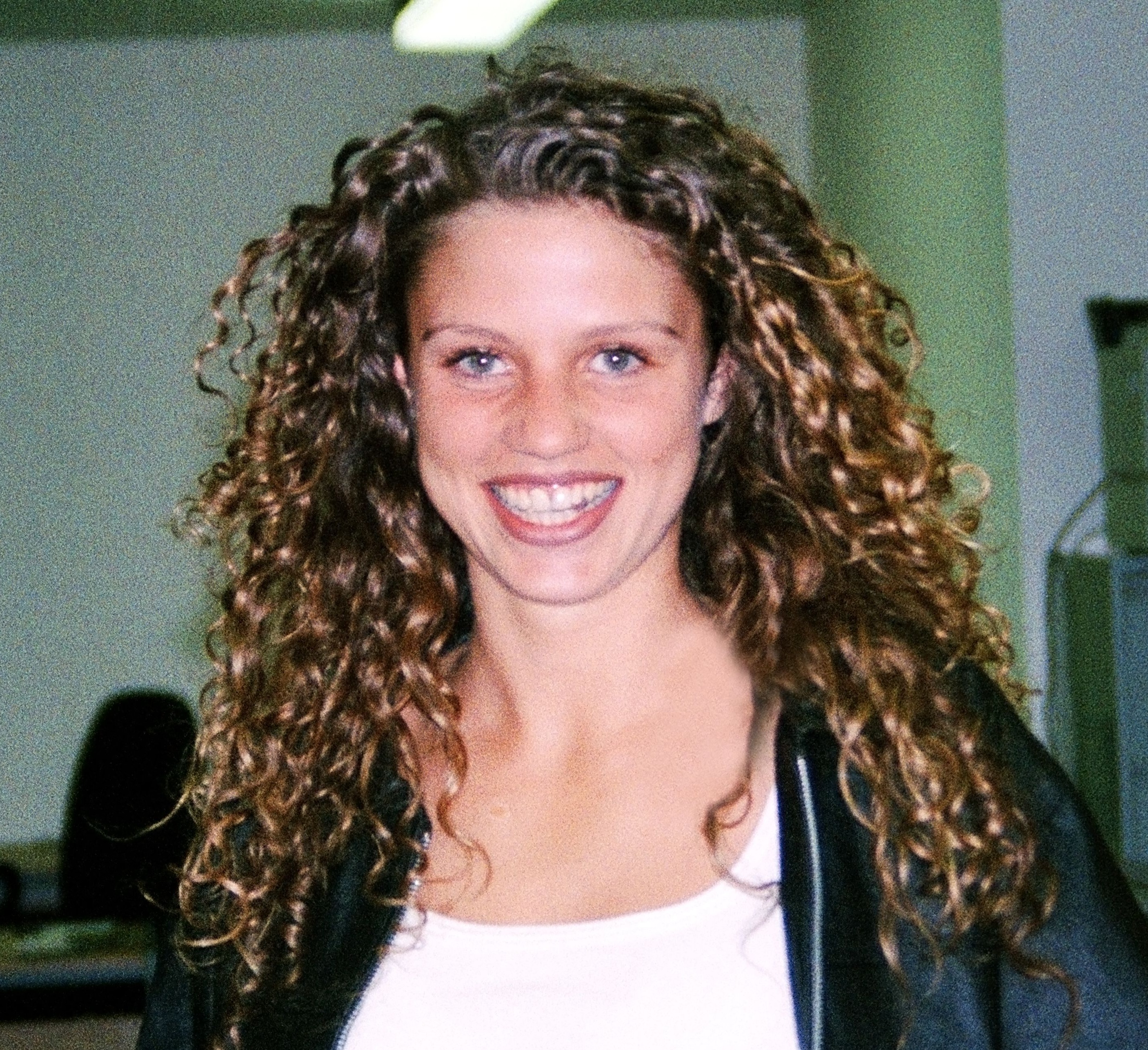 But Katie would have a long way to go to contend with these body modification lovers.

From Barbie wannabes to human cartoons, we look at the people who have dedicated their lives to plastic surgery.

Brazilian Jessica, 37, has spent £600,000 transforming herself into a human Barbie.

Since transitioning in 2019, she’s had 75 surgeries including gender reassignment, facial feminisation, boob jobs and hip implants. 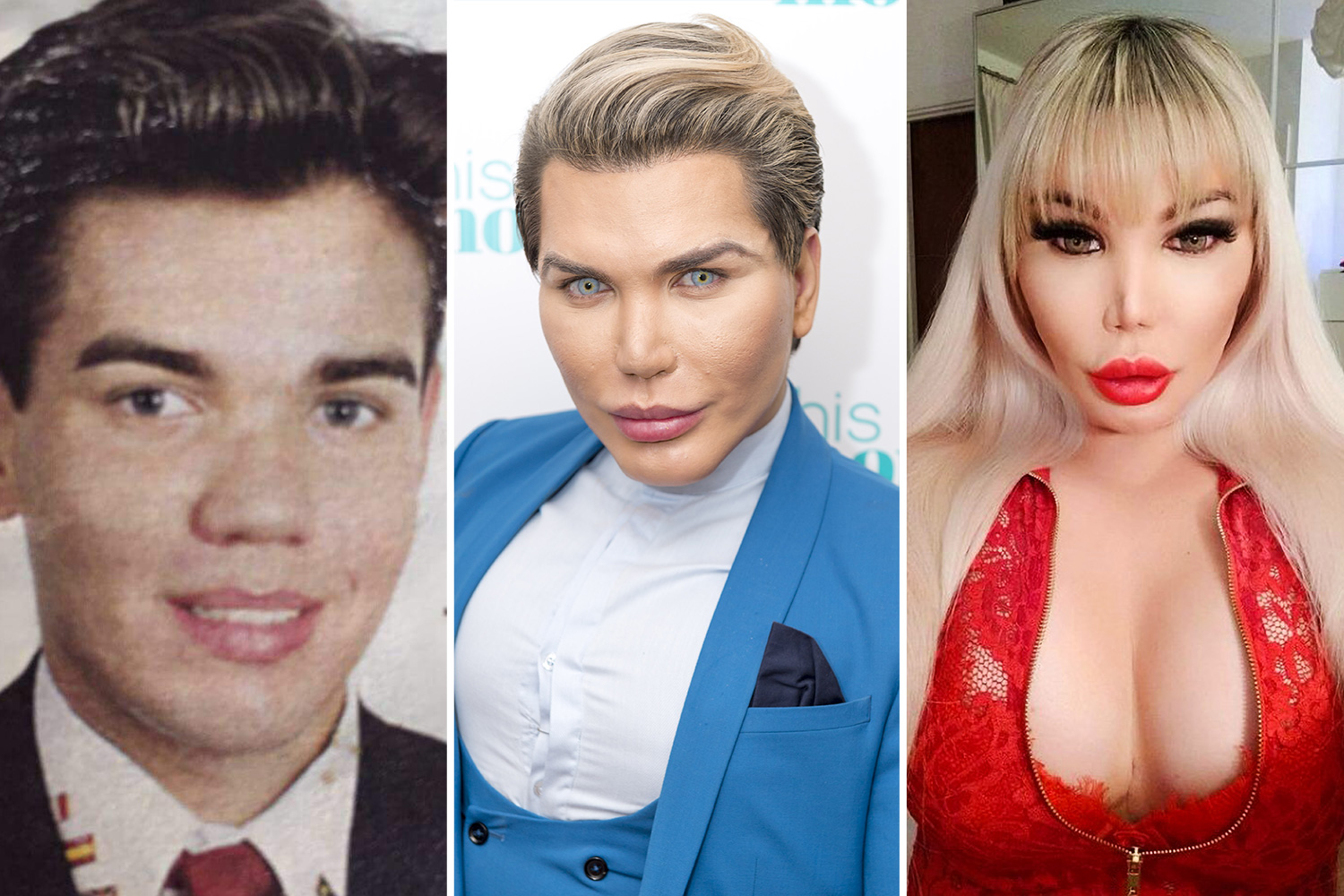 Most recently she had gastric band weight loss surgery in Turkey after ballooning to 16st.

Before her transition in 2019, she began her surgery journey to become a human Ken doll.

She said: “I like to stand out, be unique, and be an individual. I always believe my soul never matched my body.

“I was pretty much born in the wrong body. We all watched Disney movies growing up and felt very inspired by the fantasy and the beauty portrayed.”

Justin, from Los Angeles, has had a whopping five nose jobs in his pursuit of perfection. 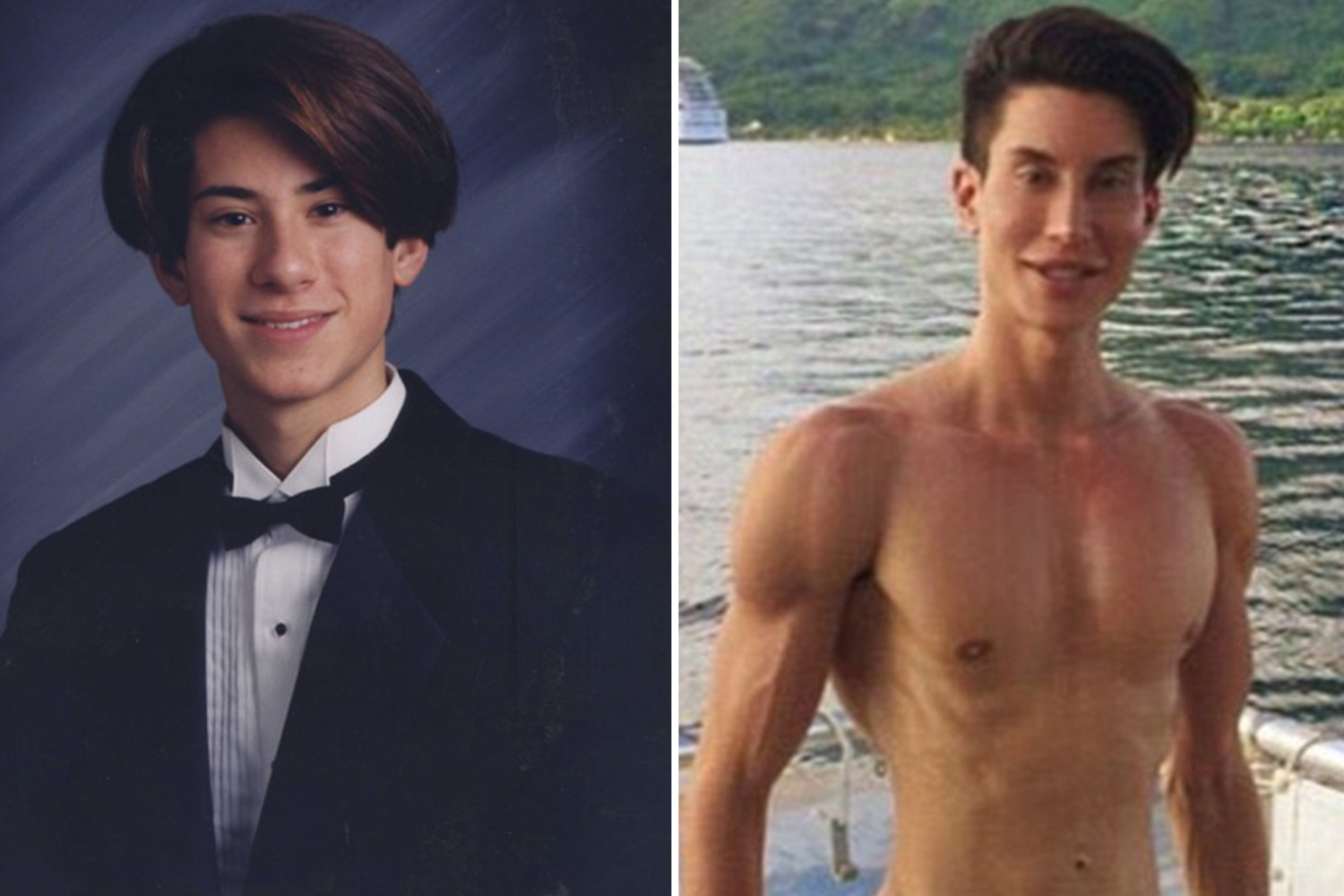 He said: “I knew I didn't need them. I never felt my body was less than or was dissatisfied with it.”

The plastic surgery consultant has also designed his own silicone shoulder implants to sell to plastic surgeons.

He said: “So all the implants I’m paying custom for myself right now, like my shoulders, my quads, my abs, the lats… they’ll hopefully be available to plastic surgeons.”

Phillipino Herbert, 43, has had 23 surgeries to look like his hero Superman.

He has spent $7,000 on nose jobs, skin whitening, liposuction, jaw realignment and fillers. 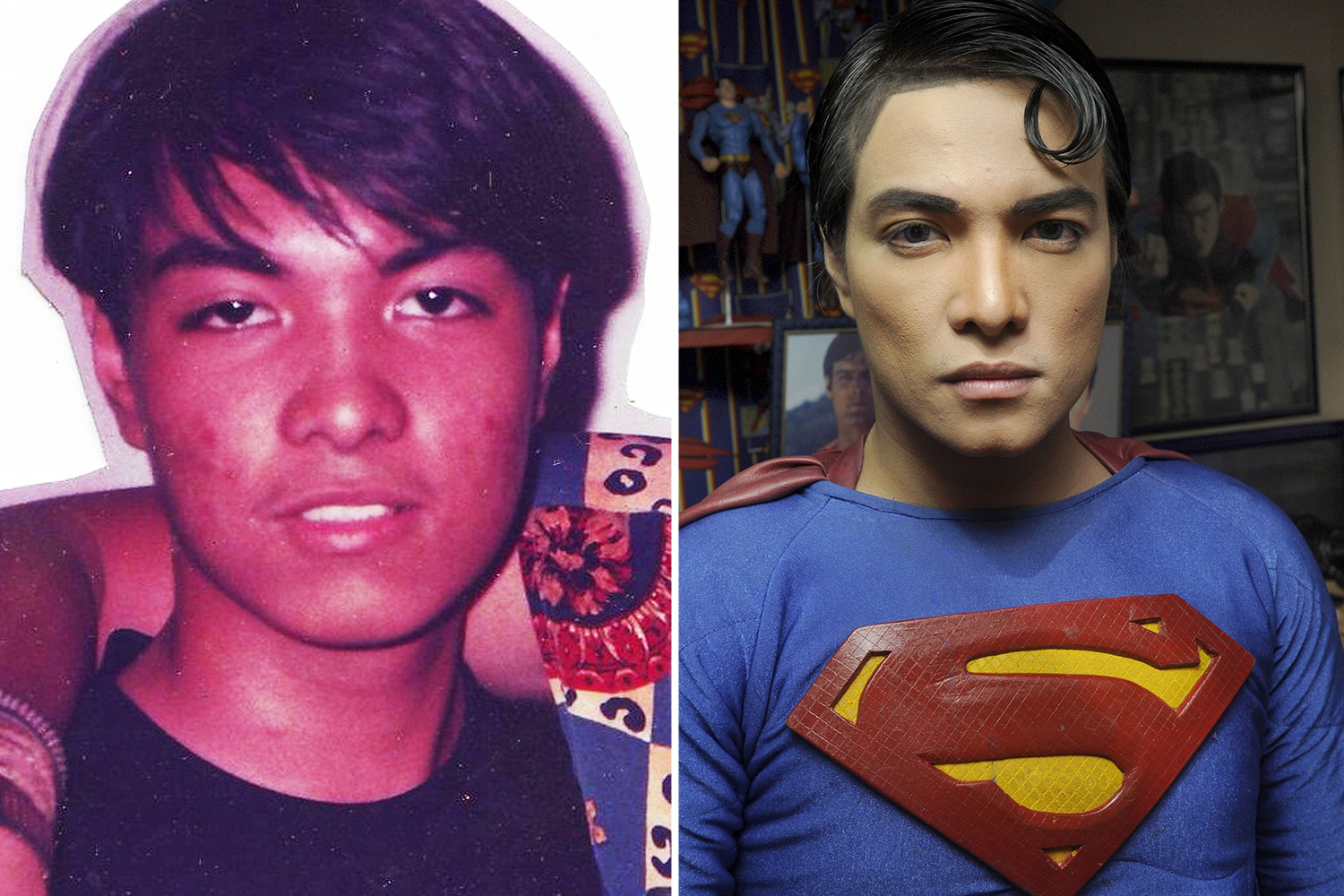 In an attempt to look more like his childhood icon Clark Kent, he wears blue contact lenses and uses skin-whitening products.

Herbert came under fire on TV show Botched for admitting he used illegal filler to bulk out his chest.

He said "I totally don't have any regrets. What is there for me to regret? Everything that has happened in my life has been positive and because of Superman.

“When my body says it can not endure it anymore or when my doctor says that my body can not handle it because of age, then I will stop.”

The wannabe pop star who identifies as non-binary and Korean – has defended having brow lifts, a chin implant, five nose jobs and face lift. 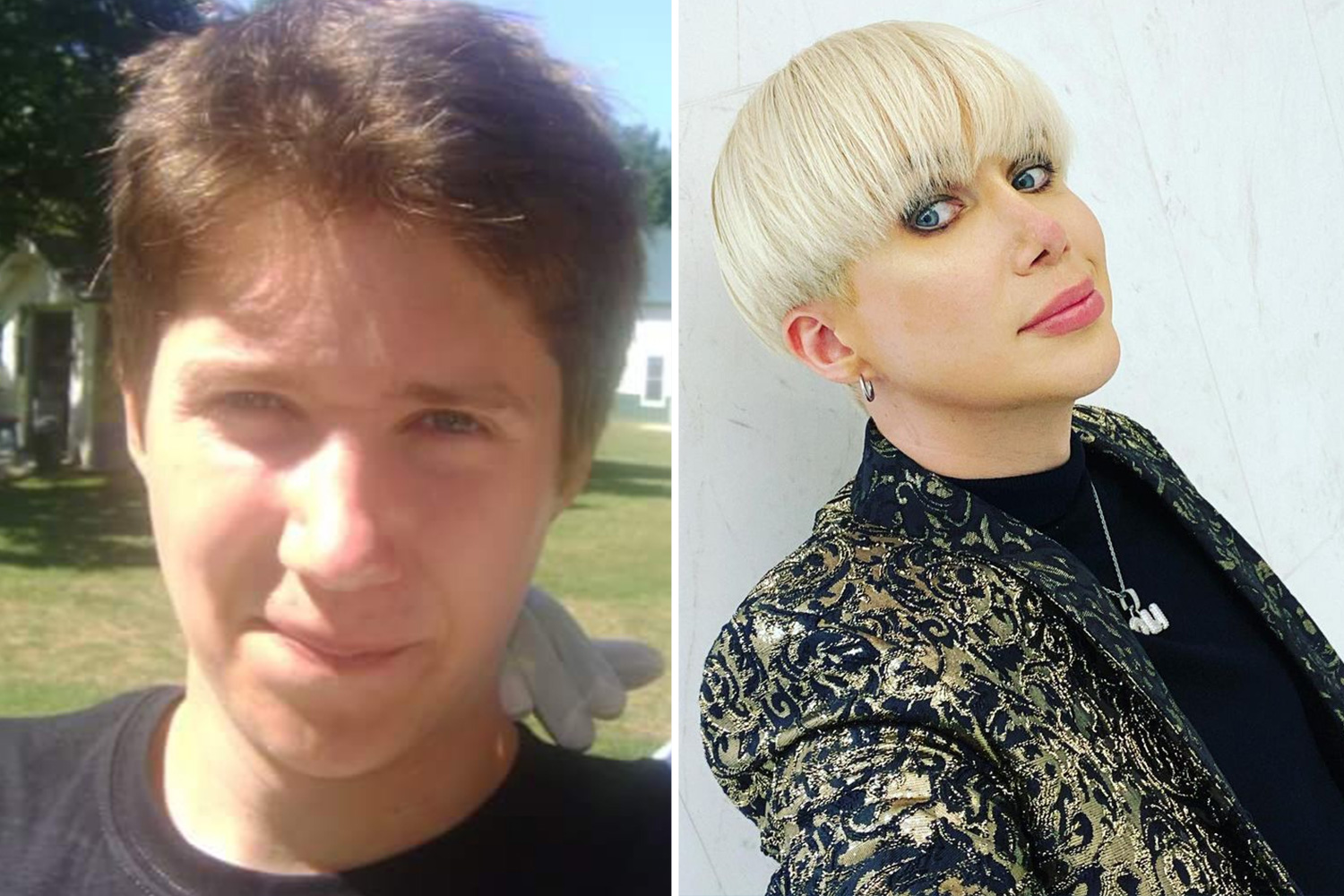 Last month, Oli said: "It feels so good to finally come out as a Korean non-binary person after being trapped in the wrong body and wrong culture my whole life."

But the Brit revealed his surgeries have resulted in complications with cartilage leaking out of his nose.

Oli said: “I mean all my nose is completely botched so I have to do it again. I’m going to do it in Korea.”

They added: “My doctor wouldn’t give me half the things I was asking for. He still performed on me but I didn’t tell anyone I was having surgery.

“I never do, I just like to get it done and then tell people because people always get upset.”

Cartoon fan Pixee, has had more than 200 cosmetic procedures in an attempt to look like an animated princess.

Pixee, 31 – who lives with human Ken doll Justin Jedlica – boosted her breasts up to a 30J through four boob jobs and has had six of her ribs removed to achieve an impossibly small waist. 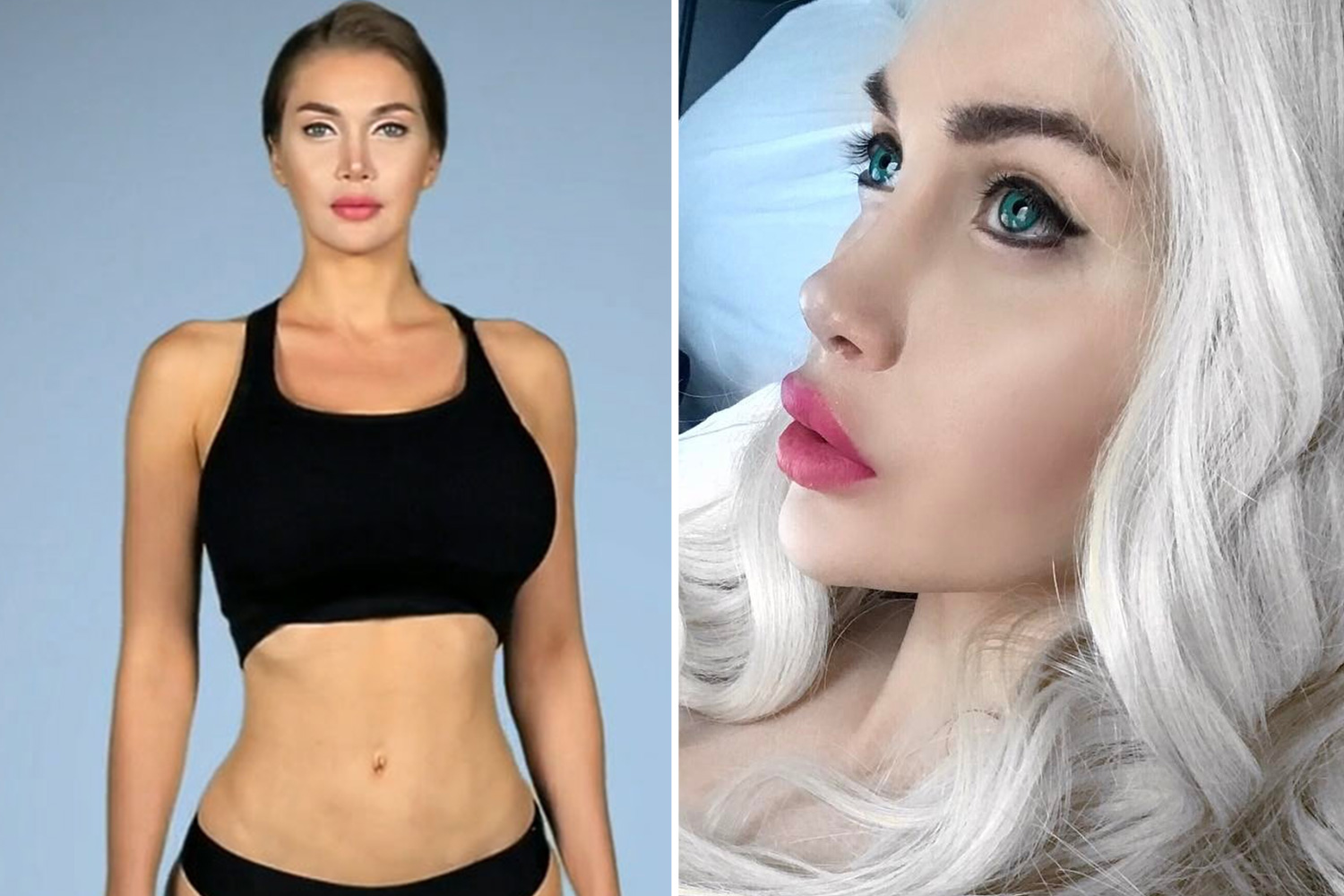 The former electrician has also had two rounds of liposuction, labiaplasty, a bum lift, nose jobs and even an ear alteration.

She controversially had an eyelash transplant using her own pubic hair.

In 2018, she had a dangerous cheekbone shaving operation performed in Korea.

She said: “All the other surgeries have been easy in comparison since they are performed more frequently – this one required a lot of research."

Nurse Tara, 32, from Melbourne, Australia, has spent £55,000 pumping up her massive lips and breasts.

To date, the OnlyFans star has had five boob jobs, a nose job, bum implants, teeth veneers as well as botox and fillers. 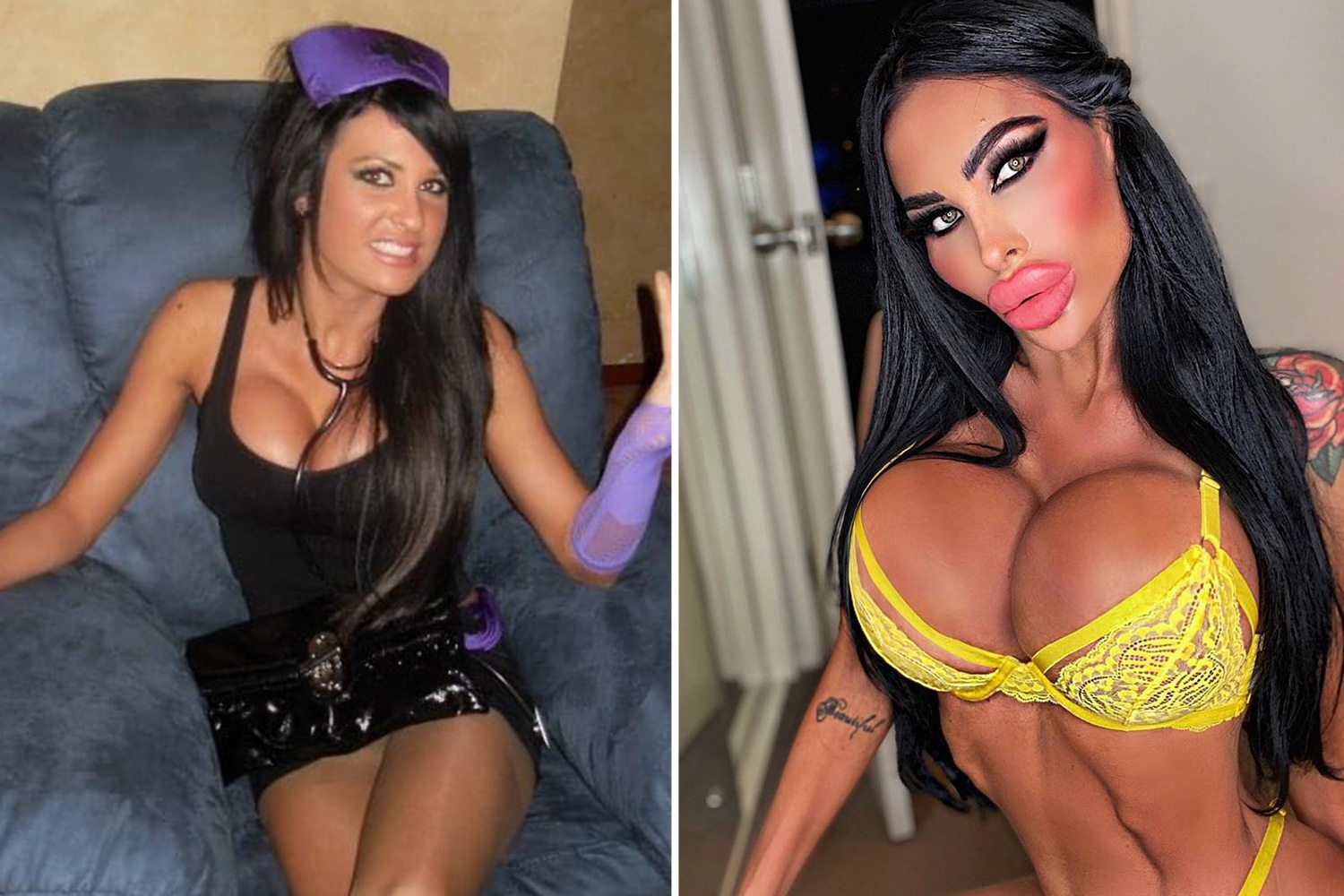 She said: “My lips are definitely my statement. I always make sure they’re nice and plump and get regular injections.

“I’ve definitely lost count of how much product is in there! I’m finally happy with how they look so now it’s just all about maintenance.”

Last year she told of plans to change her eye colour and have a rib removed – but had to wait until lockdown restrictions lifted.

She said: “There is no limit for me when it comes to plastic surgery. It is incredibly addictive and I already want bigger breasts!

“As soon as travel is permitted, I have plans to go back overseas to visit my surgeon and get my breast size increased to 1500cc.”

Croatian stylist Neven, in his late forties, has undergone multiple surgeries to look like a Bratz doll. 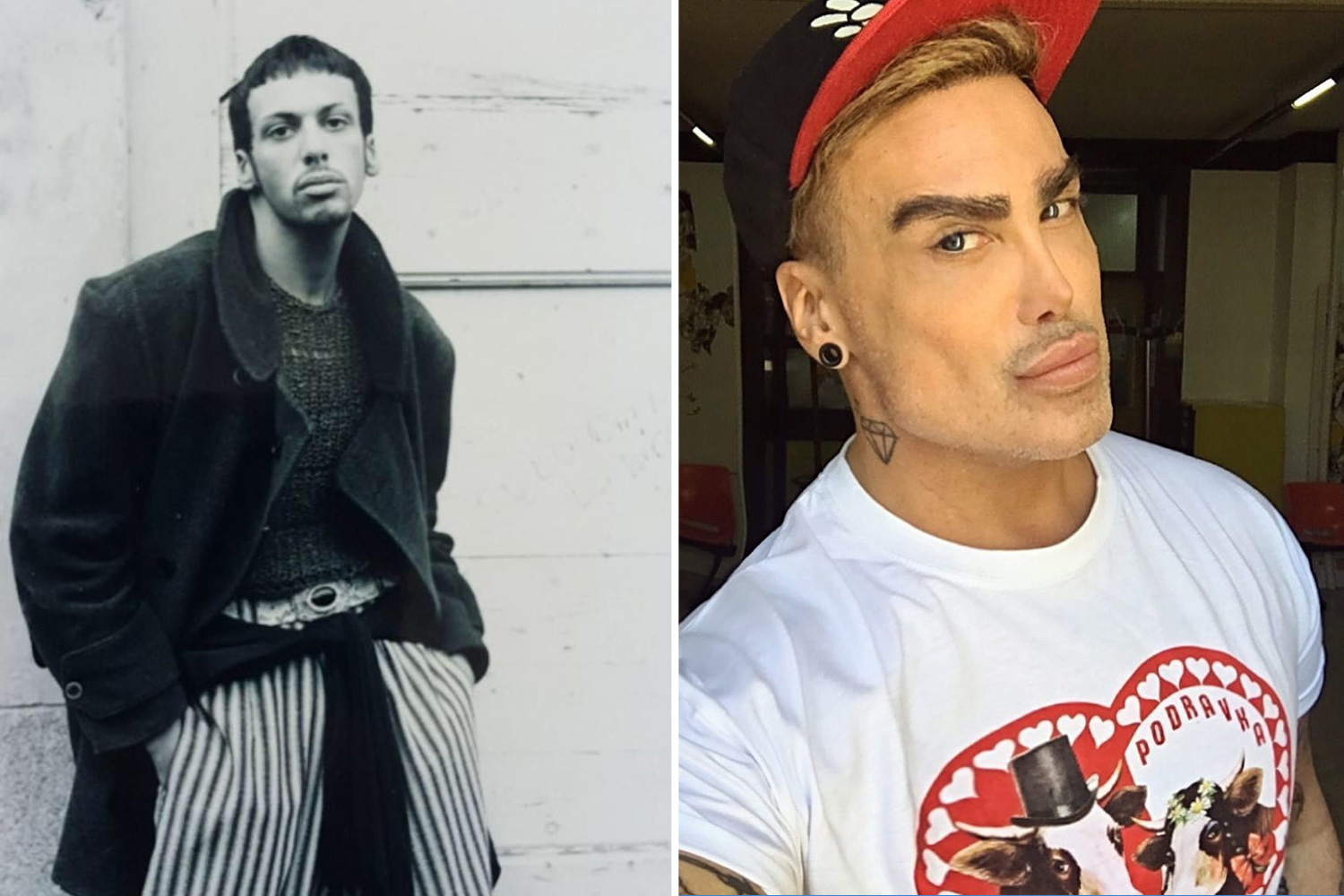 In 2017, after travelling to Iran for a nose job he was left with an erection for three months in a complication called priapism.

He said: “I went through a really hard time.”

Neven is an old hand at cosmetic procedures – after first getting lip fillers in 1992 to change his appearance.

He said: “I often hear from people that I looked better before surgery.

"It was a long time ago and I'm curious, who will not look better if they are 20 years younger?"

Argentine Luis has had 32 surgeries to fulfill his dream of becoming an elf.

The 29-year-old publicist has spent £75,000 on a rhinoplasty, face and neck lifts, a cat eye lift as well as an eye colour change surgery.

He has also had an ear modification operation to appear more elfin. 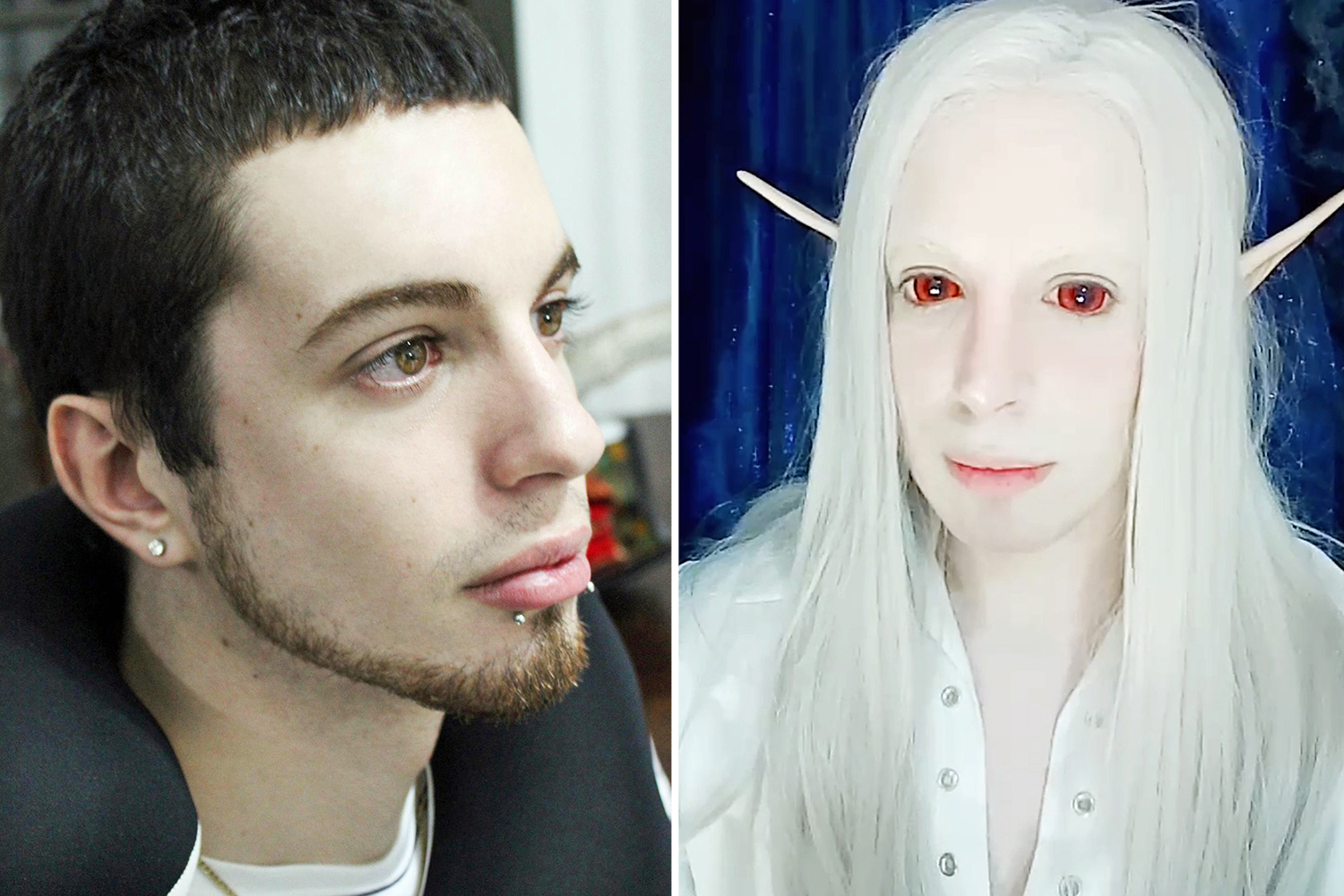 He said: “I was a fan of movies such as Labyrinth and Neverending Story, and loved books about legends, mythology, and such.

“I just wanted to look like all those things that made me happy.

“It started with hair dye in flashy colours, then crazy contact lenses, then makeup… but I wanted more. Things pretty much escalated to what I am today.”

Meghan Markle and Kate Middleton are not princesses because of Camilla Parker Bowles, royal historian reveals