After half-hearted attempts at dressing for sad selfies before the Oscars and Golden Globes, The Met Gala is giving the world of celebrities permission to rediscover the joys of feathers, sequins, borrowed jewellery, embellished wings and carpet-sweeping trains.

Following an 18-month absence imposed by COVID-19 lockdown restrictions, the Metropolitan Museum of Art Costume Institute benefit, usually held on the first Monday in May, returns tomorrow morning to add some much-needed colour and excitement to a fashion landscape eroded in recent months by active wear. It’s a celebration of creativity, the joys of dressing up and an opportunity for guilty snickers at poor choices. 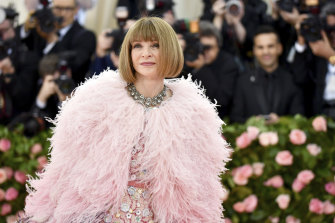 Anna Wintour overseeing her domain at The Met Gala in 2019.Credit:AP

Each year The Met Gala is timed with the launch of an exhibition at the prestigious gallery, but it’s really a demonstration of Anna Wintour’s power. Founded by fashion publicist Eleanor Lambert in 1948, championed by former Vogue editor Diana Vreeland from 1973 as a special consultant, the event has been given a Rebel Wilson-worthy glow up from Anna Wintour who stepped in as chair in 1995.

The enduring editor of USVogue took a chic cocktail party and transformed it into a gaudy spectacle of excess that would have impressed Marie Antoinette, with a dash of Studio 54 naughtiness thrown in (although only forbidden cigarettes have been spotted in the bathrooms), in the process raising millions of dollars for the arts. 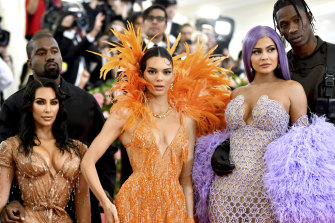 In 2014 a wing at The Met was renamed the Anna Wintour Costume Center, with Michelle Obama performing the unveiling, to remind guests how to address their thank-you notes.

This year’s dress code of “American Independence” takes its cues from the exhibition, a two-part series devoted to America design opening with In America: A Lexicon of Fashion. Work by Ralph Lauren, Donna Karan, Halston and Prabal Gurung will be inspected by guests on arrival.

“This two-part exhibition considers how fashion reflects evolving notions of identity in America,” Max Hollein, The Met’s director, said in a press release. “In looking at the past through this lens, we can consider the aesthetic and cultural impact of fashion on historical aspects of American life.”

In May, the exhibition’s much larger second part, In America: An Anthology of Fashion, will open.

Beneath all the Philip Treacy hats, this is a fundraiser, with the 2019 gala raising more than $US15 million ($20,365,132) for the Metropolitan Museum’s Costume Institute. Individual tickets reportedly cost $US35,000 ($47,518). Between 500 and 600 guests usually attend, but an early release from the gallery suggested that this event will be intimate (translation: 400 guests). No matter how much money you have, Anna Wintour approves all attendees. 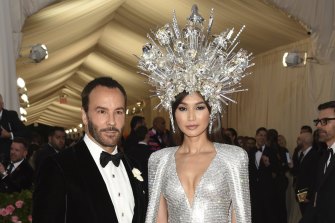 Who will I see?

The guest list is private (you never know who might upset Anna at the last minute) but co-chairs are guaranteed paparazzi fodder with singer Billie Eilish, Call Me By Your Name’s sample-sized star Timothée Chalamet, tennis champion Naomi Osaka and Prada-wearing poet Amanda Gorman helping with hosting duties. 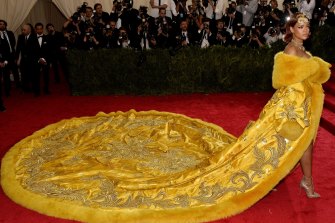 Rihanna arrives at the 2015 Met Gala in a gown by Guo Pei.Credit:EPA

Joining Wintour as honorary chairs are CFDA boss, fashion and beauty mogul and film director Tom Ford along with Instagram head Adam Mosseri. This year’s exhibition is sponsored by Instagram. 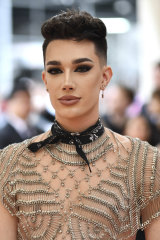 Expect to see Rihanna, who is the unofficial queen of The Met Gala red carpet since arriving at the 2015 event China: Through The Looking Glass in a striking yellow gown by Guo Pei, nicknamed the Omelette Dress. The singer and owner of fashion and beauty brand Fenty has confirmed that she will host the official after-party.

Faux-outrage erupted when rumours spread that influencers and TikTok stars would dominate this year’s guest list. Stars of your phone screen have been attending The Met Gala since Chiara Farragni posed in Calvin Klein in 2014, followed by appearances from Liza Koshy, James Charles, Camila Coelho and Lilly Singh.

Will they be wearing masks?

All guests must show proof of vaccination and negative COVID-19 test results. Masks must be worn while not posing for photographs on the red carpet, eating or drinking. Good news if that chemical peel hasn’t settled down.

Why should I care?

This is a playful expression of fashion, with the red carpet standouts always those who fully embrace the theme, such as Lady Gaga, Katy Perry and Sarah Jessica Parker. The gala has catalogued the transition of fashion from an exclusive group of rail thin models and designers to a far more diverse guest list. It’s also a step-up from selfies.

Follow our live coverage of the Met Gala red carpet from Tuesday 7am on The Sydney Morning Herald and The Age.

Horoscope today, Thursday July 8: Daily guide to what your star sign has in store for your zodiac dates

Nike's Cyber Sale Is the Best Monday This Year So Far