SIX days before our shoot, Nadia Sawalha looked at the planned moodboard – in all its scantily clad glory – and realised how much she’d changed. A couple of years ago, she would have run a mile from doing anything so revealing.

“I thought: ‘My god, how far have I come?!’ I still get a shock that I just accept my body now. It’s not body confidence, it’s body acceptance. I accept that this is what I’ve got.” 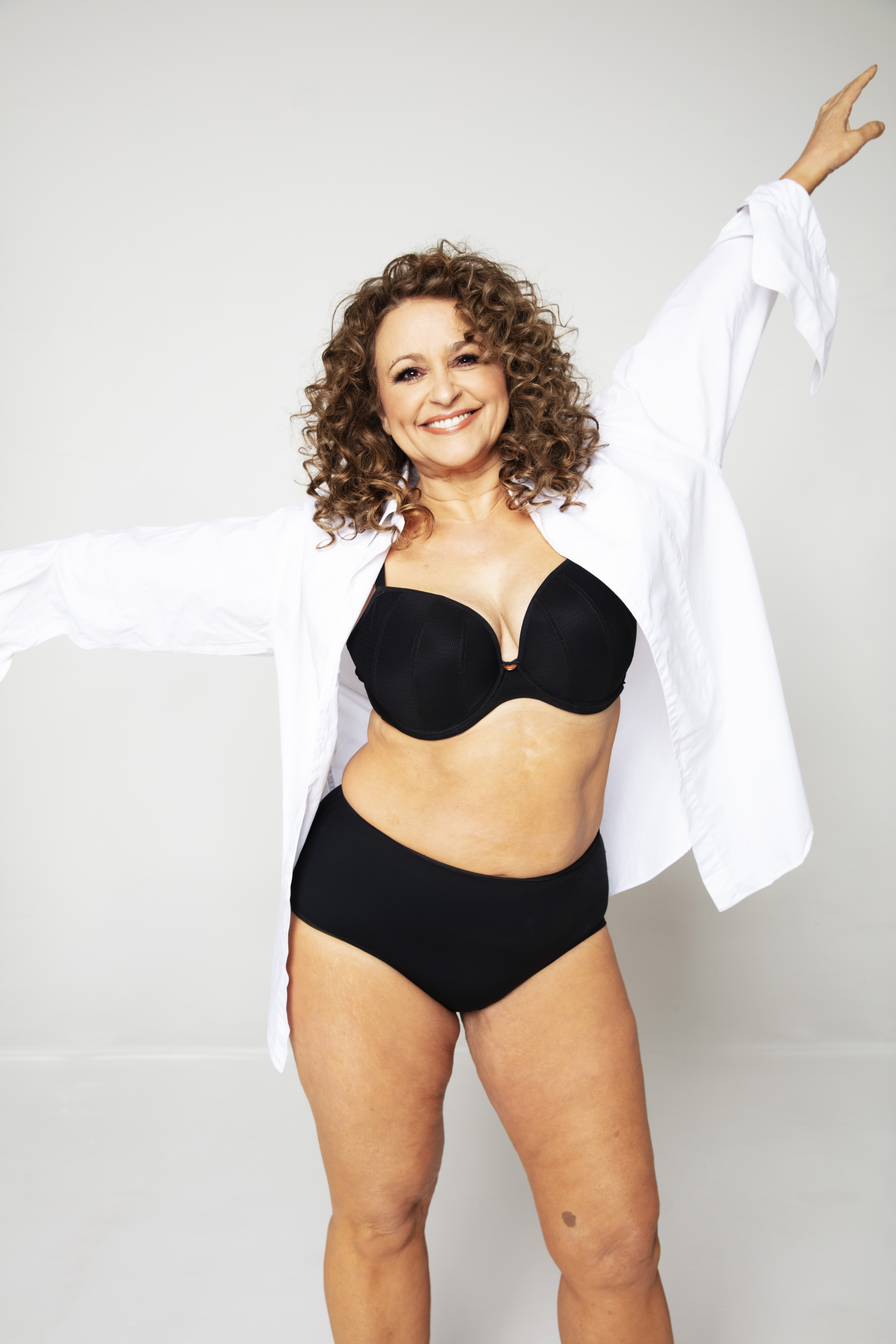 After finding fame playing Annie Palmer in EastEnders in the late ’90s, Nadia, 56, is now best known for her 11-year tenure on Loose Women. But in recent months, the mum of two has also emerged as a body-positivity badass.

Once “obsessed” with her physical flaws, two summers ago Nadia burst into tears  on YouTube, admitting she was unable to “shake the shame” of her cellulite. She pledged to be kinder to “Signora Cellulita” and has stuck to her word, becoming a social media hit in the process.

Nadia’s straight-talking take on body image is as refreshing as it is entertaining, and she’s particularly hilarious when parodying the Instagram photos of celebs like Kim Kardashian.

Nadia says: “They have to be kept like an orchid in a glass jar and fed just the right amounts of food and oxygen, whereas daffodils just pop up everywhere and they’re lovely! I’m not an orchid, I’m a daffodil, and I’m fine with that!”

Settling down in the London home she shares with TV producer husband Mark Adderley, 50, and their two daughters Maddie, 18, and Kiki-Bee, 13, we talk midnight McDonald’s binges, therapy, and how HRT saved her life.

Nadia, how old were you when you started having negative thoughts about your body?

I was probably nine or 10. My mum and dad would never say anything, but the Arabic side of my family were always commenting. “You look nice now my dear, but the time is coming when you’ll be fat!” That was while they were feeding us lamb, chicken and fish in one meal. Then I went to stage school [Italia Conti], which is very much about how you look, so that exacerbated things.

When I started getting parts in films, I’d think: “Why am I going  to this? I’m not attractive!” I had imposter syndrome. Early on in my career, I was doing a TV show and I was 91/2st with hip-waist-bust measurements of 36-24-36 – I had the body of a bloody goddess! – but I was bigger than everybody else.  I remember the stylist saying: “Oh my god, we’ve got to increase the budget. You’re such a difficult size”. 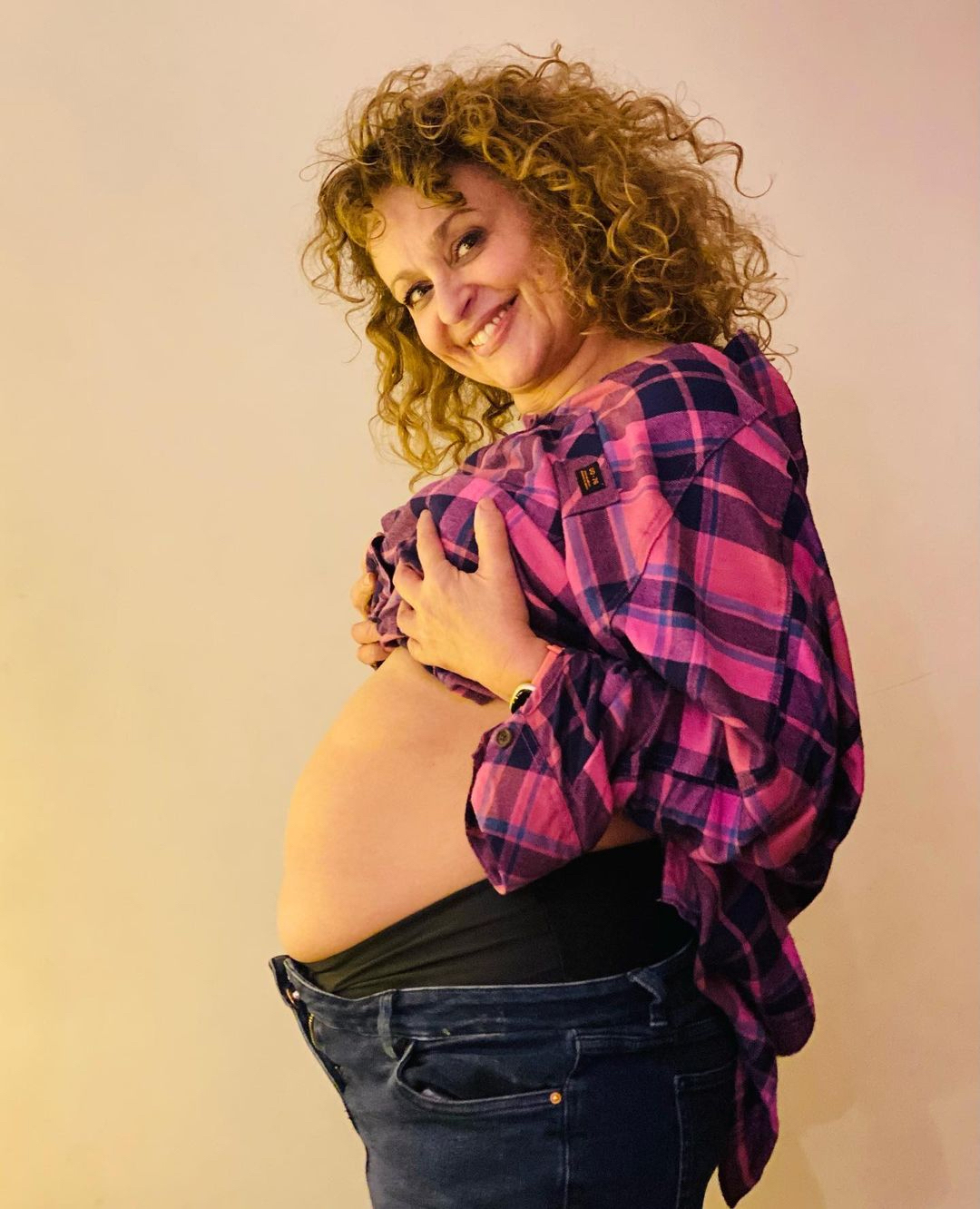 What’s been your biggest motivator for achieving body acceptance?

I don’t think I’d have got where I am now without my daughters. I had to see the impact of all of this on them. My eldest has definitely seen my disordered eating – bingeing one day and then vegetable soup for a week. All that b*****ks. When she was younger, she was around me going: “I hate my arms”. It’s this inherent thing we do as women. We go: “I look disgusting” or “I couldn’t wear that, not with my legs/arms/elbows”. Little girls are growing up with this seeping in by osmosis.

When did you stop hating your body?

When we did the Body Stories campaign for Loose Women [in October 2017]. I had to go down the pub with Jane Moore because I was so anxious about the whole thing. I would never stand in my bra and knickers in front of anyone, then suddenly we’re on billboards in our underwear. It’s been a gradual process since.

Why do you use the words body acceptance instead of body confidence?

People think: “Ooh, you’re the body-confident one!” and it’s not like that. I don’t get up every morning and feel fantastic about myself. I just try every day to move the voices in my head that take me away from being what I want to be, which is a brilliant woman. I had CBT [cognitive behavioural therapy] to break the pattern. We create train tracks in our head and our negative thinking keeps going to that place. You have to turn the wheel away from that and it takes a long time.

You’ve previously talked about struggling to control your weight. What’s your diet like now?

This January was the first of my entire adult life where I wasn’t on a diet. The relief! Counting calories is so ingrained, so I work every day on not thinking like that. Mind you, I’ve really piled it on in this last lockdown. I’ve been ordering McDonald’s at midnight, like I’m 17! I had to be weighed by the doctor the other day and I have put on weight. The old me would have gone: “OK, what diet am I going on now?” But I didn’t. I just stopped getting McDonald’s at midnight and having one bottle of rosé in two glasses.

Counting calories is so ingrained, so I work every day on not thinking like that.

Are you planning on losing the weight or are you no longer bothered?

I’m 5ft 6in and weigh 12st 13lb, and that is 2st over what is healthy for me. I’ve watched my dad have diabetes and I do not want that or a heart condition – I want to live for as long as I can. I look great, my husband thinks I look great, but being overweight is not healthy. I would like to weigh less, but I don’t think: “I’m disgusting”, like I would have done before.

You’ve been open about your menopause journey. How has HRT improved things?

I started HRT six months ago and it’s changed my life. I was completely anti-HRT and I wish somebody had hit me over the head eight years ago and stuck a patch on me. It’s incredible. For so many women, their relationships break down or they leave careers that they love, and all because they are lacking the female fuel that they need, which is oestrogen. I went through really dark times. I thought I was dying. First, I thought I had cancer, then I thought I had Alzheimer’s. Now my memory is coming back. The menopause changes you, it changes your very essence.

The people I work with most are genuine friends, everybody else is an acquaintance. My real friends are Kay [Adams], Stacey [Solomon], Jane [Moore] and Judi [Love]. I’m so lucky that I work with my friends.

What are you like when you go out together?

We tend to go to each other’s places or we’ll rent somewhere. The last time we went away was to Jane’s cottage and that was lovely. We’re planning another trip.  We holiday, party, laugh and cry together, just like any other group of friends. 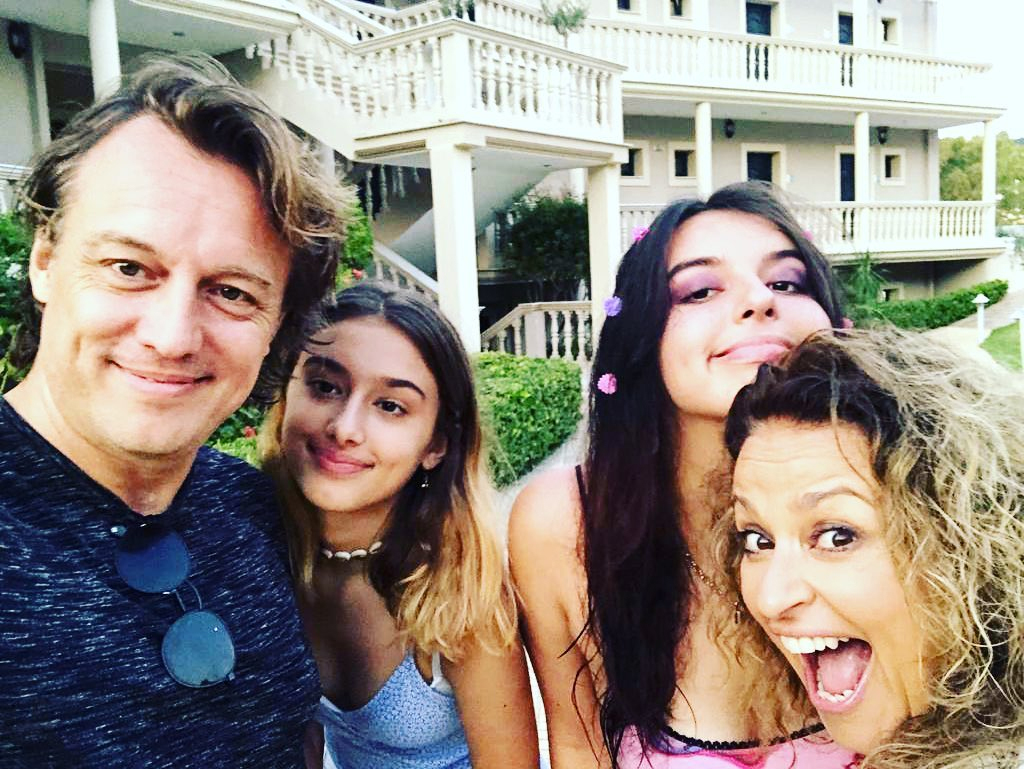 A lot more on our YouTube channel [The Sawalha-Adderleys]. Mark and I work seven days a week on that and it’s just brilliant.

Would you jack in Loose Women to throw yourself full-time into it?

No! What kind of a person would give up being able to talk about all kinds of things with their friends every single week? God, no. I think I’ll do it until the day I die!

Prince William has an ability to ‘make everyone feel at ease’ and brings ‘immediate calmness’, grieving father reveals

Capricorn weekly horoscope: What your star sign has in store for January 10 to 16