The Duke and Duchess of Sussex were the most talked-about royals in 2019, with their unexpected separation from the rest of the family. They have since settled in North America and are allegedly planning to relaunch their brand separate from the other royals. The Duke and Duchess of Cambridge, however, remain terminally connected with the throne, but this may have garnered them more support than their newly emancipated counterparts.

Experts claim the Duchess of Cambridge has claimed a surge in support for her continued style during the coronavirus pandemic.

While Prince Harry and the Duchess of Sussex have debuted to the public with a more relaxed look from their perch in Los Angeles, the future Queen has maintained her elegant dress sense.

The Duchess of Sussex once claimed the top spot amongst the royal women, with her outfits garnering the most interest when she joined the family in 2018.

However, her move abroad with Prince Harry has seen her drop behind, as data from LovetheSales.com has highlighted more interest in the Duchess of Cambridge. 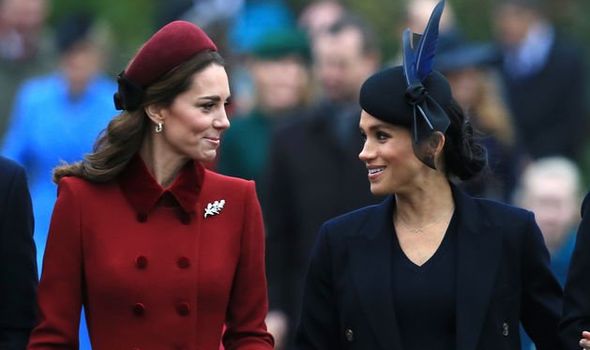 The site analysed every outfit worn in public by both duchesses over the last three months and compared their popularity.

They found shoppers had dropped £6,305 of their hard-earned income on outfits worn by the Duchess of Cambridge, increasing global fashion searches by 86 percent.

Her outfits were also three times more likely to sell out, with 14 of 16 doing so, while just one of six of the Duchess of Sussex’s did.

Speaking to the Daily Mail, stylist Jessie Stein said the Duchess of Cambridge had a “more premium” look favoured by fans.

He said: “Both royals have been confined to Zoom calls and social distance charity outings during lockdown, however, Kate has opted for more flowing dresses, pieces that wouldn’t be seen out of place at a formal event.

“I think Meghan’s newfound distance from the Royal family combined with her less glamorous apparel in lockdown has contributed to a drop in fan’s searches for her clothing.”

“Kate has certainly shown a more premium look in lockdown and is really leading from the front with her continued charity work online.

“The public has seen a different, more personal side of Kate during lockdown and she has embraced summery styles in her outfit choices.”

The Duchess of Cambridge’s influence has been dubbed the “Kate effect” by royal experts.

They have documented the effect, which stretches back a decade to hers and Prince William’s engagement.

Then, her royal blue Issa dress attracted fierce attention from retailers, who snapped up the item.

Neiman Marcus placed an order from 1,100 as they debuted to the public, and celebrities flocked to the label.

Scarlett Johannson, Jennifer Lopez and Keira Knightley jumped on the trend soon after.

The immeasurable interest later disappeared as Helayel didn’t have the capital to produce the label to meet demand.