In one of his earliest visual memories, Michael Diamond is 2 or 3 years old, crawling around on the floor of his parents’ apartment on Central Park West, looking up at massive canvases he now knows were paintings by Mark Rothko and Barnett Newman.

“These very intense paintings, and they’re big in scale,” he said.

Despite this exposure, Mr. Diamond, 55, did not grow up to be a painter, and he collects only records. In the early 1980s he helped found Beastie Boys, a hardcore punk band that evolved first into a tongue-in-cheek rap group and then a somewhat serious one. (We know him as Mike D.)

Recently he was surrounded by some of his mother’s objects when they were displayed in the Los Angeles offices of Sotheby’s, on the 29th floor of an office tower in Century City. It was the tallest building Mr. Diamond had entered since the start of the pandemic.

Mr. Diamond’s mother, the renowned collector and decorator Hester Diamond, died in January 2020 at the age of 91. Ms. Diamond and her husband, Harold Diamond, began collecting contemporary art in New York in the 1950s, often acquiring pictures directly from artists in their circle of friends, including Rothko and Willem de Kooning.

Then, after Harold Diamond’s death in 1982, she began selling those paintings, and built a large and eclectic collection of old master paintings, sculptures and statues made in the 14th through the 17th centuries.

“She didn’t ever want to be stagnant,” Mr. Diamond said, “and she didn’t want these paintings to be a stagnant thing — ‘I got that 40 years ago and it’s just there.’ She wanted to be surrounded by things she really had passion for, and really loved.”

Now her furniture, minerals and gems, books and memorabilia will go on view and for sale Jan. 22 in New York; the auction will end on Jan. 29 with her old masters and a few pieces of contemporary art.

“Her collection is, across the board, what people want to see today — more than a pretty Dutch landscape,” said George Wachter, the chairman of Sotheby’s North America and co-chairman of its old master Paintings department. “They want to see meaty stuff, and that’s what she has.”

In recent years Sotheby’s has sought to leverage the power of celebrity to stoke buzz around its old masters auctions among buyers of the Instagram generation. Victoria Beckham, the pop singer turned fashion designer, helped curate a show of works by female old masters in 2019. That same year, the auction house exhibited old master paintings selected by Fabrizio Moretti, the Italian art dealer, in a gallery space designed by Fabrizio Moretti, the drummer of the Strokes.

Sotheby’s clearly intended to make the most of having a Beastie Boy at hand. But he’s only involved with the show as a seller. The hip curatorial sensibility guiding this exhibition is actually that of Hester D, who displayed her centuries-old oils, shrines and altarpieces in a home full of cartoon-bright contemporary furniture.

From White Castle to MoMA 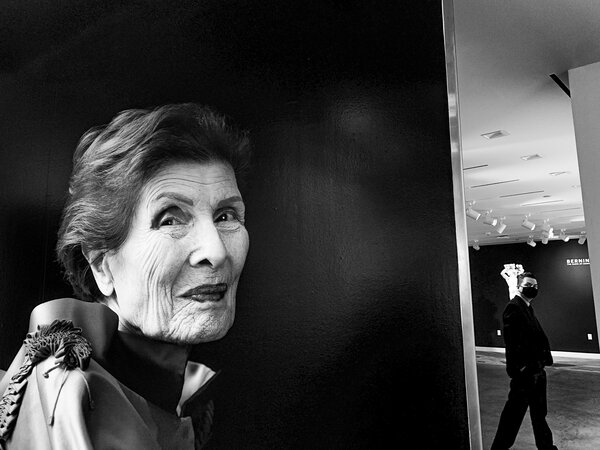 Hester Diamond was born Hester Klein in the Bronx in 1928. In an oral history interview conducted by the Archives of American Art in 2017, she said that she met Harold Diamond on a street corner — “That’s how you met boys in the Bronx,” she said — but her son thinks they may have met at White Castle, the iconic New York area burger joint that’s also mentioned on five different songs from “Licensed to Ill,” the Beasties’ epoch-defining debut album.

“I swear to God,” Mr. Diamond said. “It ended up being an important place for two generations of the family.”

His parents, he said, “couldn’t wait to get out of the Bronx. They somehow knew there was this world in Manhattan that was bigger than the world they grew up in, in the boroughs.”

Ms. Diamond had fallen in love with the Museum of Modern Art while attending Hunter College High School in Manhattan. After graduating from Hunter College, she learned to type and became a secretary; Harold Diamond graduated from City College and Columbia University and taught fourth grade in East Harlem. They married in 1950 and settled on the Upper West Side, renting an apartment in a tenement building owned by Joseph Diamond, Harold’s older brother.

(Some years later, Mr. Diamond said, “my dad convinced Uncle Joe to rent an apartment to Bill de Kooning, and he tried to broker a deal with Uncle Joe that Bill de Kooning would pay him in paintings. Which of course would have made him a billionaire upon death — but he turned down the deal. He was like, ‘What am I going to do with paintings? Tell him to pay his rent on time every month.’”)

“Later in my mom’s life,” he said, “I would ask her, ‘Mom, how did you and Dad become interested in paintings? How is it that Dad started working at a gallery, and as a woman, how did you become integrated into this world?’ And she would laugh and be like, ‘Oh, honey, you don’t understand — it was the same 35 people who would show up to any of these things.’”

“The Abstract Expressionist world, that community in New York — it’s put on a historical pedestal, rightfully so,” he said. “But at the time, when it was happening, it was ultimately a really micro scene.”

Ms. Diamond said in 2017 they were motivated to acquire art solely by “the excitement of seeing it, and falling in love with it, and buying it. It was always all about love.” Many of the artists whose work they bought early on have faded into obscurity; a few of them have not, like Mark Rothko, whose 1953 painting “Blue Over Red” the Diamonds acquired in 1957.

“My dad probably scraped together $500 to buy it directly from Rothko,” Mr. Diamond said, “and then thought he was the smartest guy in history, because he immediately turned around and sold it for $2,000.”

“It was both my parents’ conviction that people should interact with this art, that it was not supposed to be behind velvet ropes and worshiped from afar,” Mr. Diamond said. Paintings intended for sale would live on the walls of their apartment until they found a buyer. “We’d come home from school,” he said, “and be jumping around all this stuff.”

“There were all these artists and art historians and characters from the New York City art world that would permeate most evenings of our lives,” Mr. Diamond recalled. “There were some pretty strongly opinionated folks in that room. So it always seemed completely normal to both my brothers and I that you’d have an opinion about everything. We had a family motto: ‘Often wrong, never in doubt.’”

They grew up taking it for granted, Mr. Diamond said, “that if you wanted to paint something that was totally unlike what anybody else had done, or if you wanted to do an installation art piece that was not like anything the world had ever seen, that was completely normal. I do think it led to me being in a band where there was just — nobody ever told us we couldn’t do A, B, C and D, and that’s why we did all those things.”

Harold Diamond died in 1982, at 56, one year before the first Beastie Boys single was released. Hester Diamond retired from her decoration business and also took over his business for a time, but soon stepped away. Money had transformed the contemporary art world.

“She couldn’t afford to get the things she was passionate about,” Mr. Diamond said. “And she was always interested in educating herself and learning, so she goes out and teaches herself everything she can learn about old masters and just dives in.”

In 1995, with the scholar Edward Goldberg, she founded the Medici Archive Project, which eventually created the first digital index of the Medici family’s paper records. The project required her to master a new language. “She had to give addresses, in academic Italian,” Mr. Diamond said. “It wasn’t like she could just get by and order lunch.”

She began selling off contemporary works. A Mondrian went for $21 million at Sotheby’s in 2004; on a family vacation a few years later, she saw it again, hanging in the lobby at the Wynn Las Vegas.

Mr. Diamond says it was hard to see some of his mother’s contemporary pieces go on the block, like Brancusi’s “Bird in Space.”

“It really had this resonance, this heaviness to it,” Mr. Diamond said. “I would compare it to a great jazz record. It was like hearing a Miles trumpet solo or something — just this incredible presence in the room.” It’s now in the collection of the Seattle Art Museum.

“I’ll miss it,” Mr. Diamond said, “but also, I respected her decision — the fact that she basically chose life and passion and change and learning over stagnation.”

Ms. Diamond did hold on to a few 20th-century pieces. The Sotheby’s auction includes a Bill Viola video diptych, a glass-encased human figure by Dustin Yellin and a plaque commemorating “Licensed to Ill” going triple-platinum.

What did his mother made of his own artistic product? “I think she was patient and tolerant. I don’t think she embraced any of it, honestly,” Mr. Diamond said.

“She still was a Jewish mom,” he said. In 2006, the Beasties released a concert film that had a good review in The New York Times when they were due for a lunch date.

“I showed up at the restaurant, and she puts the paper down on the table,” he said. “She’s like, ‘You know, Michael, I kept thinking I was going to get the call from you one day that you’d gotten a day job, but I guess now I’ve finally given up on that idea.”